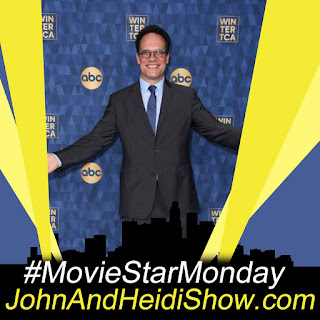 This #MovieStarMonday we visit with Diedrich Bader. Many know him for his roles as Oswald Lee Harvey on the long-running comedy The Drew Carey Show and Lawrence from the film Office Space. Bader has had roles in animated features such as Ice Age, Surf's Up, The Simpsons, He has also been in the comedies The Beverly Hillbillies, Napoleon Dynamite, Miss Congeniality 2, Balls of Fury, and Meet the Spartans. He has also recently guest starred as Rich in FX's Better Things.
He's now the HUSBAND on American Housewife which just returned on a new night... Wednesdays at 9:30/8:30CT after Modern Family on ABC TV.

A German study found that spending less time on Facebook leads to a happier and more fulfilling life. (https://bit.ly/2QgnmT9)

THIS IS YOUR BRAIN ON DRUGS: Brought to you by TimeForRehab.com!
Each day we share stories about people doing dumb things under the influence, but ADDICTION IS NO LAUGHING MATTER! If you or someone you know needs help, we're here! Learn more at TimeForRehab.com.
A routine traffic stop in Glenpool, Oklahoma, took a strange turn after officers discovered meth and a baby squirrel. Police said that Heidi Kolteryahn was sitting in the passenger's seat when the vehicle was pulled over for speeding. Inside the car, officers found roughly one pound of methamphetamine along with scales and baggies. When they searched Kolteryahn's purse, they were shocked to find a baby squirrel along with a dropper of baby formula. She explained that she was caring for the squirrel after her son found it during a tree trimming job. Officers took her into custody on charges possession of wildlife during a closed season. It is unclear if Kolteryahn or the driver of the car were cited for the drugs. The squirrel was taken by the Oklahoma Game Warden and was brought to a state-certified rehabilitation agent. (https://ihr.fm/38AqBeq)

American Idol is joining the growing list of TV and movie productions shutting down for a bit. The TV singing competition is suspending production effective immediately. Hollywood Week for Season 18 began on Monday, so there are still a few weeks left before live shows are set to begin.

Marvel’s Black Widow won’t be released on May 1. The studio has now delayed the movie indefinitely, pulling it off the schedule and not giving us a new date for when we can expect it to open.

A team of international researchers have concluded that the coronavirus has entirely natural origins through evolution. Public genome sequence data on COVID-19 show absolutely no indication that the virus was produced artificially or in a lab setting. Researchers from Columbia University, Scripps Research, the University of Edinburgh, and the University of Sydney worked on this project.

April 15 is not the most dreaded day of the year. That’s according to a survey of 1,000 people, which finds more people — 33 percent — dread visiting the dentist or doctor more than tax day. Only 15 percent said they hated April 15.

British police said a 5-year-old boy took his father’s SUV for a joyride that ended with a low-speed bump into a brick wall. Concerned motorists spotted the pint-sized driver and called police. Investigators said the boy traveled 4 miles without exceeding 10 mph. The boy wasn’t injured.

Sweat doesn't actually stink. You might notice that any sweat you produce right after a shower doesn't smell so bad. That's because your sweat itself isn't stinky; it's the bacteria on your skin that breaks the sweat down that causes the odor. Additionally, you'll find that the sweat on your arms and legs doesn't smell as much as your armpits. That's because sweat glands in your armpits secrete more protein into a dark, damp environment—the perfect place and food for bacteria.

Dateline.... SCOTLAND
In Scotland two guys held up a worker at a store at knifepoint before making off with over $1,000. A brave witness followed the pair and gave police details about their car. It was was found outside one of the robbers’ mom’s home and seized the following day. The robber later called police to get it back, leading to him being identified.

A man in Flagler County was arrested for impersonating an officer just two days after going to jail for the same thing. The Flagler County Sheriff's Office said that LeRoy Stotelmyer was arrested on March 9th for Impersonating a Law Enforcement Officer and Shoplifting. Following this, law enforcement went on to speak with several toll bridge attendants who had previous encounters with Stotelmyer. They said he often would try to flash a badge to avoid paying a $2.00 bridge toll. He reportedly did this several times over the last few months and identifies himself as a U.S. Air Marshall. During his last encounter at the toll bridge, they said that the attendant presented Stolemyer with an article about his arrest on March 9th for impersonating a law enforcement officer. Stotelmyer then put away his badge and paid the toll. However, on March 13th, deputies said that they once again arrested Stotelmyer at his home. He is being charged with Felony Violation of Pre-Trial Release and Impersonating an Officer.
(https://bit.ly/39QFpa9)

Authorities took an Oklahoma man into custody after he allegedly tried to use counterfeit money to purchase gift cards. Last Tuesday evening, officers were called to a CVS in reference to a man trying to make a purchase with counterfeit money. When officers arrived at the CVS, authorities took 22-year-old Jeremy Cooper into custody. According to an arrest affidavit, Cooper had several $100 bills in his hand and on his person that were counterfeit. “I personally examined the 26 $100 bills where I observed they were all not consistent in texture with a real $100 bill. Each bill also had the same serial number, and each bill displayed a Chinese symbol on the back,” the affidavit states. Cooper was arrested on two complaints of possession of a counterfeit instrument. (https://bit.ly/2TWVxS6)
FAKE NEWS.... OR FLORIDA?!
I read a headline and Heidi (and you) need to guess if the story is FAKE NEWS or something that really happened in the state of FLORIDA.

A Homestead man was arrested for cocaine possession and then got re-charged for eating a police car seat while he was in custody ….. FLORIDA (https://goo.gl/DHjMvX)
GOOD NEWS: Brought to you by BetterCreditCards.com

New Jersey Police Officers Are Delivering Groceries To The Elderly