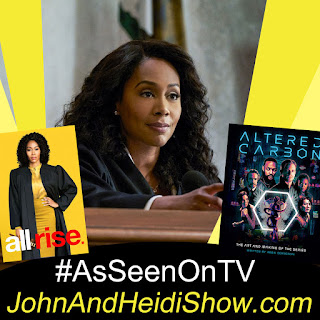 This weekend we visit with Simone Missick. Currently staring in All Rise on CBS TV... and in Altered Carbon now streaming on Netflix. https://www.imdb.com/name/nm1395855/

A new study by the University of Geneva found that being stubborn and rigid may protect the brain against Alzheimer’s disease. (https://bit.ly/2vkpEZY)

THIS IS YOUR BRAIN ON DRUGS: Brought to you by TimeForRehab.com!
Each day we share stories about people doing dumb things under the influence, but ADDICTION IS NO LAUGHING MATTER! If you or someone you know needs help, we're here! Learn more at TimeForRehab.com.
California Police reported an incident on Friday they called a “very messy arrest.” Police say Anthony Espinoza was contacted in Paso Robles when he was pulled over while riding a bicycle on the wrong side of the road. Officers attempted a probation search. Espinoza fled eventually making it to the 1400 block of Riverside. He then reportedly defecated himself, put his hands in his pants and removed the feces with his bare hands. He “mushed the poop onto himself in an attempt to ward off the officers,” according to police. He was arrested and methamphetamine was located in his backpack. He was transported to the San Luis Obispo County Jail on the charges. (https://bit.ly/2vFhqfq)

Chet Hanks took to Instagram to announce that his parents have left the hospital and entered a self-quarantine. (https://pge.sx/2w6PC3P)

Rachel Mathews, the star of “Frozen 2,” announced on Instagram that she’s tested positive for COVID19. (https://bit.ly/2vuNuCz) Ukrainian actress Olga Kurylenko, who starred in the James Bond film “Quantum of Solace,” has tested positive too (https://cnn.it/2ISAGZK)

Disney has stopped production on its live action films for now. (https://bit.ly/3a7F2YI)

Al Roker and Craig Melvin are taking time off from “The Today Show” for a bit. (https://pge.sx/38U3A6l)

A survey found that online alcohol delivery services are New York’s hottest business during all of this. (https://bit.ly/2U1hfo1)

Organizers of Roswell, New Mexico’s annual UFO festival say the event is is still a go despite concerns. (https://bit.ly/3a1toPd)

McDonald’s is closing its seating areas and playrooms across the country for now. (https://cnn.it/3b20puK)

2020 marked the first time New York City went without a St. Patrick’s Day parade in over one hundred years. (https://bit.ly/2xPmRZX)

Lady Gaga revealed that she’s gone into self-quarantine and is refusing to visit her parents. (http://dailym.ai/2IPKljF)

The annual furry convention in Atlanta has been canceled.(https://bit.ly/2vsux3d)

Courtney Stodden posted a series of lingerie photos on Instagram to, quote, “Show off her breakup haircut.” Stodden is 25-years-old. But if you remember, she tied the knot with Doug Hutchinson when she was 16 and he was 50.
(http://dailym.ai/3d2gPFf)

New York City has ordered a nightlife shutdown amidst the virus. Wow! (https://bit.ly/2weEhyp)

Las Vegas Casinos have joined the Airline Industry in asking the federal government for a bailout. (https://bit.ly/2J05UxT)

FUN FACT FOR YOU:Share this with your friends... they'll think you're really smart!
Mr. Cherry breaks all the records you've never heard of. Japan's record breaker for most records broken is Cherry Yoshitake, a children's entertainer who goes by "Mr. Cherry." In 2018 alone, Mr. Cherry set one-minute records for the most pairs of underwear pulled on (36), the most baked beans eaten (71), and the most apples bobbed (37).

The greedy bros who bought almost 18,000 bottles of hand sanitizer to profit off the coronavirus were finally cleaned out on Sunday — when they were shut down by Tennessee prosecutors. Just a day after they whined about the likes of eBay and Amazon closing their price-gouging attempts, Matt Colvin and Noah Colvin were ordered by the state’s attorney general to “stop buying and selling medical goods and products.” “We will not tolerate price gouging in this time of exceptional need, and we will take aggressive action to stop it,” Attorney General Herbert H. Slatery III said Sunday of the investigation. The anti-price-gouging law was in place because Tennessee Gov. Bill Lee had declared a state of emergency over COVID-19. (https://bit.ly/2IRF2QY)

MOMENT OF DUH: Brought to you by InsuranceChicken.com
An American Airlines passenger delayed a flight to Nashville for over eight hours by joking about having the coronavirus. The flight was set to depart 6:30 p.m. Saturday from Dallas, but takeoff was hampered by a man, who first refused to lift his tray table, then claimed he had the deadly virus. “People were freaked out because nobody knew what was going on,” another passenger reported to the local news. “People didn’t know if he was actually sick or if he really didn’t have coronavirus or not.” The unruly passenger was ejected from the plane by hazmat crews and police officers, who then explained the situation to freaked-out travelers. But the flight was still delayed by unnerved crew members, who refused to fly after the fiasco. It was supposed to get to Nashville at 8:40 p.m. Saturday but didn’t get there until 4:40 a.m. Sunday. American Airlines said the man was arrested for making a false claim, but didn’t provide further comment about the incident. (https://bit.ly/33ucLcE)

FAKE NEWS.... OR FLORIDA?!
I read a headline and Heidi (and you) need to guess if the story is FAKE NEWS or something that really happened in the state of FLORIDA.
A Taco Bell worker in Miami was arrested for impersonating a police officer after he attempted to confiscate drugs from a customer so he could use them ….. FAKE NEWS
GOOD NEWS: Brought to you by BetterCreditCards.com