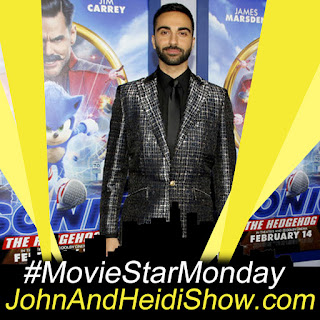 It's another #MovieStarMonday... this time with Lee Majdoub from the #1 Movie in theaters “Sonic the Hedgehog”.

The film follows a cop in the rural town of Green Hills who helps Sonic try to escape from the government who is trying to capture him. Fans may also recognize Majdoub from The CW’s “The 100,” having joined the cast in Season 6 in the recurring role of ‘Nelson.’ ...Lee also stars as ‘Simon/Curtis,’ in the Horror film, “Puppet Killer,” which is currently making its festival rounds.
Lee Majdoub stars as ‘Agent Stone,’ the right hand man to Jim Carrey’s character in “Sonic the Hedgehog” https://www.sonicthehedgehogmovie.com/

A survey by New York Budget Officials estimates that the state will take in an extra $700 million in tax revenue thanks to Wall Street Bonuses. (https://bit.ly/2TvQpTo)

THIS IS YOUR BRAIN ON DRUGS: Brought to you by TimeForRehab.com!
Each day we share stories about people doing dumb things under the influence, but ADDICTION IS NO LAUGHING MATTER! If you or someone you know needs help, we're here! Learn more at TimeForRehab.com.
According to court filings, a 22-year-old Iowa woman was driving a Maserati littered with “several hundred” spent canisters of nitrous oxide when the vehicle was pulled over by police late Monday evening. When a computer check revealed that the registered owner of the 2014 luxury coupe had a “driving status of Barred,” Iowa City cops approached the vehicle after it pulled into a Kum & Go gas station around 10:45 PM. Behind the Maserati’s wheel was Ziyuan Zhong, who appeared under the influence. Cops reported that Zhong had “bloodshot, watery eyes, dilated pupils, impaired speech, and impaired balance.” The source of Zhong’s impairment apparently was scattered about the auto: “There were several hundred spent 'Whip-It' brand Nitrous Oxide canisters,” Officer Jeff Reinhard noted. Zhong was arrested on multiple charges, including driving under the influence, possession of a fake ID, and possession of nitrous oxide. (https://bit.ly/32b6KAV)

38-year-old Clare Crawley has been named the new Bachelorette for season sixteen of the show. The season is expected to last three months. Clare was actually the runner up on “The Bachelor” six years ago when she was dumped by Juan Pablo. (https://bit.ly/3alBp1b)

United Airlines is warning of more flight cuts due to the Coronavirus.
(https://bit.ly/2PFKoCF)

A new study found that Coconut Crabs talk to each other when they’re mating.
(https://bit.ly/2Tjeyhj)

A Yahoo Finance Survey found that Calabasas has surpassed Beverly Hills as the home for the most rich and famous people. (https://yhoo.it/2I8grH0)

Prince Harry is being asked to be introduced simply as “Harry” for his speaking engagements, as he’s no longer allowed to use his royal title. (https://yhoo.it/2PrcbXe)

Prison officials announced that Harvey Weinstein will get special treatment because they fear another Jeffrey Epstein incident. (https://bit.ly/37Y54fr)

The man who wrote Dracula never visited Transylvania. Bram Stoker was an Irish author who is now best remembered for his gothic horror novel Dracula. Partially set in Transylvania, a mountainous region in central Romania, the story cemented the legend of the vampire in mainstream European and American culture. Despite Stoker's many world travels, he never visited Eastern Europe—and, by virtue, Transylvania—at all.

Dateline.... JAPANJapanese baseball teams played in empty stadiums this weekend over fears of the Coronavirus. (https://reut.rs/2TcwObV)

The man who led cops on a wild car chase in California after stealing a hearse with a dead body inside was charged by prosecutors on Monday. 25-year-old James Juarez, was slapped with two felony charges for the bizarre incident that began when he allegedly swiped the vehicle, a black Lincoln Navigator, from outside a Pasendena church last Wednesday night. The hearse was stolen after the driver left the keys in the ignition while dropping off another body inside the church, authorities have said. A motorist spotted the stolen hearse early the next morning, leading to a police chase on the 110 freeway that ended when the SUV crashed. Authorities found the body undisturbed inside a casket. Juarez was charged with fleeing a peace officer while driving recklessly and taking a vehicle without consent. (https://bit.ly/2Tix09u)

MOMENT OF DUH: Brought to you by SingleStudentLoan.com
An Oregon man has been busted for repeatedly duping Girl Scouts, buying cookies with counterfeit money. 36-year-old Camden Stevens Ducharme was arrested Sunday on charges of theft and forgery after two separate Girl Scouts troops reported getting bogus bills while hawking their iconic baked goods earlier this month. During one incident, police said Ducharme passed a counterfeit $20 to purchase a box of cookies from a Girl Scout troop outside a Walmart in Salem and received legal currency in exchange. Tiffany Brown said she filed a police report after her daughter’s troop was given fake money by a man on February 16th. Investigators used video surveillance and help from Walmart employees to identify Ducharme when he returned to the store on Sunday. Ducharme has since been released from the Marion County Correctional Facility. It’s unclear if he’s hired an attorney.(https://bit.ly/2wRbD6A)

FAKE NEWS.... OR FLORIDA?!
I read a headline and Heidi (and you) need to guess if the story is FAKE NEWS or something that really happened in the state of FLORIDA.
A hospital security guard was fired for uploading his farts to Instagram ….. FLORIDA (https://bit.ly/2wqKFP4)
GOOD NEWS: Brought to you by BetterCreditCards.com