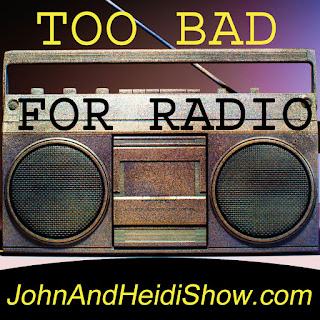 
Vaginal secretions are all the rage these days. Gwyneth Paltrow is selling a $75 candle called “This Smells Like My Vagina” via her site, Goop. This week, Erykah Badu announced she the sale of incense called “Badu’s P—y,” that smells like her vagina, on her own soon-to-launch online store — but one sexologist just goes straight to the good stuff. Shan Boodran, the author of a book called “The Game of Desire: 5 Surprising Secrets to Dating with Dominance — and Getting What You Want,” insists that her “vagina juice” works like a love potion when it comes to attracting men, making them flock to her. “Vaginal fluids, especially around ovulation, but really any time you want to feel an extra boost of confidence, can serve as a love potion,” Boodran told Refinery 29. “Regardless of if vaginal pheromones truly make a person irresistible or not, the fact that you think it does, will cause you to act in a bolder, more confident manner.” (https://bit.ly/2upNEuv)

A Nebraska man who stiffed a prostitute with a bounced check got busted after he called the cops to report that she and two men were trying to collect the debt. 23-year-old Wyatt Walker was arrested for solicitation of prostitution last Wednesday after paying for sex with 20-year-old Emma Fuhrman — who was arrested for prostitution. One of the men Fuhrman recruited to help retrieve the cash, Hans V. Berg, was also cuffed Wednesday for threatening to kill Walker. Walker and Fuhrman met on an online dating application in late January and spoke throughout the day before planning to meet for their sordid affair. Cops say that Walker paid with a check and every time Fuhrman went to cash the check over several days it bounced because of insufficient funds. So, Fuhrman asked Berg and another man to show up with her to Walker’s home to fetch the missing money. Berg allegedly threatened to kill Walker unless he paid up twice the amount originally agreed upon. When they left, Walker reported Berg’s threats to cops. Berg was also busted for theft by extortion and is currently housed in Madison County Jail. (https://bit.ly/39fnNnu)

A St. Louis cop who was told to “tone down his gayness” settled a suit against the county for $10.25 million dollars.(https://bit.ly/39vQpt3)

A female Ohio Superintendent was sentenced to ten years in prison for having sex with two high school students. (https://bit.ly/3bEIr2G)

One of Harvey Weinstein’s accusers allegedly told a friend that he gave her the best orgasm of her life. (https://pge.sx/2OJHKLs)

A Dallas, Texas, exotic dancer plummeted nearly 15 feet after falling from a strip club pole and hit the ground twerking, despite smashing her jaw and shattering teeth. After footage of performer Genea Sky’s harrowing fall hit the Internet, she posted an Instagram video explaining what had happened and thanked friends and fans for their support. She also created a GoFundMe page to pay her medical expenses. “I’m so thankful for all the positive messages I’ve been getting and all the love,” Sky said. In that video posted Sunday, the consummate showbiz pro said she fractured her jaw, which would require surgery Monday. Sky’s fall also caused her to break a few teeth and sprain an ankle, but she walked away from the accident on her own. “Even with the injury to my face it could have been a lot worse,” she said. Among the influencers that helped video of Sky’s fall go viral was Instagram user Caren Contreras, who applauded the resilient dancer’s insistence that the show goes on. “She played dat off tho,” she captioned the video along with a series of clapping-hand emojis. (https://bit.ly/2Hk55iF)

Scientists in the UK are warning that robotic sex dolls could cause psychological problems. (https://bbc.in/39I6EDt)

A survey found that pornography has created a growing number of sex addicts who don’t ever have sex with another person. (https://bit.ly/324XVby)

A Scottish man claims a botched surgery has left him with a permanent erection. (https://bit.ly/39IEmsm)

Strip Club attendance was through the roof in Chicago during the NBA’s All-Star Weekend. 3,000 strippers attended All-Star Weekend in Chicago. The Kardashians showed up to the NBA parties too. (https://bit.ly/2P1xKxk)

Amsterdam is considering a new city center dedicated to prostitution in an effort to make sex workers safer. (https://bit.ly/3bTgm7V)

Court Records show that a Florida Man was arrested early Saturday morning after allegedly “offering to show his genitals” to “everyone” trying to enjoy a 3:00 a.m. meal at an IHOP. According to police, 24-year-old Allan Ibanez entered the Clearwater restaurant and “began approaching random tables and patrons offering to show his genitals and showing them condoms.” Ibanez was asked to leave by IHOP management, but he “continued to offer to show his genitals to everyone in the establishment,” a criminal complaint alleges. “This left patrons uncomfortable and wanting to leave.” Cops arrested Ibanez for disorderly conduct, a misdemeanor. (https://bit.ly/2HX5xnA)

An amateur soccer player was suspended for five years in a local league in eastern France for biting one of his opponents below the belt during a post-match fight. The crime was committed after a second division game between Terville and Soetrich in a local league on November 17th. According to a local news website in Lorraine, a player from each side started fighting, another a Terville player joined in, apparently trying to separate them. The Soetrich player responded by biting the peacemaker's penis. The victim required about 10 stitches and had to take four days off work. “The events took place after the match, in the stadium car park. There was an altercation, an escalation and things got worse,” said Emmanuel Saling of the Mosellan football district, adding that the blame was “more or less shared.” Saling said that because the “case was quite original,” the disciplinary committee had called an expert witness before deciding to suspend the Soetrich player for five years. (https://dailym.ai/2v53fzE)

Bryan Delgado-Villatoro will not soon forget his 24th birthday. After his topless girlfriend provided him with oral and manual favors while they were driving earlier this month, Delgado-Villatoro and 23-year-old Heder Priscilla Cascante-Vargas began arguing inside their 2010 Toyota as it traveled in Hobe Sound, Florida. According to an arrest affidavit, the tumult inside the vehicle resulted in a crash after the speeding car swerved around another auto. Cascante-Vargas claimed to have been driving when the February 6th crash occurred. When sheriff’s deputies arrived at the scene, Cascante-Vargas was seen slapping her boyfriend in the face and chest as he told her to calm down. Delgado-Villatoro was arrested after allegedly ignoring a series of police orders. Court filings show that Cascante-Vargas has been charged with battery and disorderly conduct, both misdemeanors. Delgado-Villatoro is facing a misdemeanor resisting arrest without violence count. (https://bit.ly/3a85KjQ)

A Maryland man charged with poking a woman in the rear end with a syringe was found in possession of syringes containing semen when he was arrested. 51-year-old Thomas Stemen is facing assault and reckless endangerment charges in connection with a February 18th incident at a grocery store in Churchton. Police allege that Stemen approached the victim from behind as she was returning a shopping cart. Surveillance video shows Stemen jabbing something at the woman, who recoils in pain. Stemen then can be seen placing an item in a pocket of his hoodie. After cops released surveillance images, tips from the public helped them identify Stemen. When he was apprehended earlier this week, Stemen was carrying one syringe, while a second needle was found in his car. Police announced that the seized syringes contained semen. Stemen, who is scheduled for a March 25th preliminary hearing, is in the midst of divorcing his wife. (https://bit.ly/2wkUj9C)

An ex-porn star from Idaho was sentenced to ten years in prison last Tuesday for trying to hire a hitman to murder the father of one of her kids. Katrina Danforth — who performed under the names Lynn Passion and Lynn Pleasant — was sentenced in an Idaho federal court after she pleaded guilty last December to seeking a contract killing. The 32-year-old was arrested in December 2018 at Spokane International Airport in Washington as the supposed hitman she was soliciting turned out to be an undercover cop. Over a period of three weeks in 2018 before her arrest, Danforth called the undercover cop four times and mailed him a “thank you” card with a $2,500 down payment. Shortly after her arrest, the XXX actress told local outlet KHQ that she had no idea why US Marshals had cuffed her. “I don’t really know, precisely …,” said Danforth. Over the course of her career, Danforth made eight adult films between 2005 and 2010. (https://bit.ly/38bNRiI)

A leading artificial intelligence expert is warning that sex robots with coding flaws could flip out and attack humans. (https://bit.ly/2uKY5ZA)

R. Kelly’s lawyer blasted a law that keeps people with STD’s from having sex. (https://bit.ly/2TEeaZo)

An Indonesian Doctor claims that women can get pregnant in pools even if a man hasn’t climaxed inside of her. (https://bit.ly/393ieZQ)
Newer Post Older Post Home