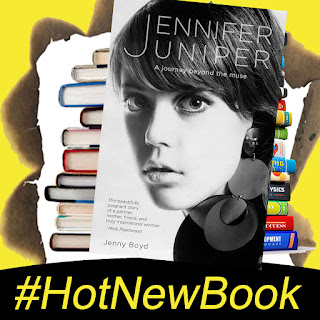 Today we talk with author Jenny Boyd about her new memoir JENNIFER JUNIPER: A Journey Beyond the Muse https://amzn.to/34pFO1f
(yes, she was Donovan's inspiration for the song)

When fashion and pop culture intersected during the Swinging '60's in London, she was swept up into both worlds. A promising young model for cutting edge designers, she worked in Carnaby Street by day and danced at the city's most popular clubs at night where the music of the best of the British Invasion was showcased. She was Beatle George Harrison's (and later Eric Clapton's) sister-in-law, she married Mick Fleetwood, founder member of Fleetwood Mac, twice, and she was entrenched in the rock 'n roll world of fame, money, drugs and betrayal. She accompanied The Beatles to Rishikesh in Northern India in 1968 to study meditation at the ashram of the Maharishi Mahesh Yogi and worked in the Beatles' Apple boutique in London.

A Travel Watch survey found that Carnival Cruise Lines still has over 6,000 passengers who are stuck at Sea.(https://cbsn.ws/3441BLK)

THIS IS YOUR BRAIN ON DRUGS: Brought to you by TimeForRehab.com!
Each day we share stories about people doing dumb things under the influence, but ADDICTION IS NO LAUGHING MATTER! If you or someone you know needs help, we're here! Learn more at TimeForRehab.com.
A pair of career criminals who claimed to “have the virus” stole two cases of Corona beer from a CVS in Florida and then fled in a stolen van, say police who arrested the duo following a high-speed chase. According to criminal complaints, 42-year-old Zavier Permenter and 32-year-old Steven Cyriacks entered the Coconut Creek business Tuesday afternoon and told workers they had the coronavirus. The men then allegedly “proceeded to grab two cases of Corona beer, as well as several detergent containers.” The accused thieves apparently claimed to be infected with COVID-19 in an attempt to deter any employee resistance to the heist. The duo exited the CVS and entered a Chevrolet Express van that was reported stolen a day earlier in Ft. Lauderdale. Within minutes after receiving a 9-1-1 call about the theft, cops located the van as it traveled at “a high rate of speed” on State Road 869. Permenter and Cyriacks were both booked into the County jail on a variety of felony and misdemeanor counts. (https://bit.ly/3aMWS3A)

Law & Order: SVU fans, here’s some really good news: Christopher Meloni is going to play Elliot Stabler again in a new series for NBC. Meloni’s Stabler will be the boss in a SVU spinoff set in the organized crime division of the New York City Police Department.

The streaming service Quibi launched this week. Quibi specializes in "quick bite" (hence the name Quibi) scripted, unscripted, and news content that will be no longer than 10 minutes and that you will only be able to watch on a mobile device.

A mother in Australia was upset when her teenage son was pulled over for drunk driving. But instead of taking his keys or grounding him, she put an ad online the next day and sold the car.

Experts say Americans are being misled into thinking life will return to normal in May.

In Memphis, Baptist Hospital found 30,000 old masks in storage but all the elastic was rotten. Hundreds of Memphis residents are sewing new elastic on them so they can be used in the hospital.

Ever get so frustrated with your phone you throw it across the room? You’re not alone. A survey reveals that one in six of us has broken a gadget in a fit of rage. And it takes an average of 12 minutes for us to lose our cool with the tech that we end up destroying.

A 57-year-old man in Pennsylvania is facing charges after allegedly mocking an elderly victim for wearing a mask and deliberately coughing near the victim.

FUN FACT FOR YOU:Share this with your friends... they'll think you're really smart!
Cheetahs don't roar. Cheetahs can't roar, but they can purr, meow, hiss, bark, and growl instead. This type of behavior is much like the domestic cats we keep in our homes.

A church in Arkansas plans to continue holding services despite federal and state guidelines against holding gatherings of more than ten people amid the coronavirus pandemic. Awaken Church in Jonesboro claimed in a Wednesday evening Facebook post that Jesus was the "first death of Covid-19," the disease caused by the novel coronavirus. The post included an image of a cross wrapped in a white sash against a sunset background, with the words "Jesus died with COVID-19 so that you didn't have to bear it." In a separate post earlier on Wednesday, the church explained that it would continue to hold services despite the rapidly spreading pandemic. The local NEA Report news site first reported Awaken Church's decision to keep its doors open to worshippers. As of Thursday afternoon, Arkansas had 624 confirmed cases of the coronavirus.
(https://bit.ly/2JIGENf)

Police say that a Missouri miscreant walked around a discount store and coughed “on the doors and into the air” before writing “COVID 19” in the condensation on a freezer door. As detailed in a probable cause statement, 33-year-old John Swaller was arrested following his antics inside a Dollar Tree store near his home in Cuba, a city about 85 miles southwest of St. Louis. Swaller is a convicted felon whose rap sheet includes assault, theft, burglary, and receiving stolen property convictions. According to cops, after Swaller entered the Dollar Tree around 2:30 PM, he “walked around the store” and “continued to cough on the doors and into the air,” prompting customers to lodge complaints with store employees. “John writes COVID 19 in the condensation on the cooler door,” the probable cause statement notes. “John was asked to stop and he continued. John continued to cough as he exited the front door.” Charged with making a terroristic threat, Swaller was booked into the Crawford County jail. (https://bit.ly/344QNgn)

FAKE NEWS.... OR FLORIDA?!
I read a headline, you guess if the story is something that really happened in the great state of FLORIDA or is it #FakeNews made up to trick you and amuse me
An Orlando man was busted for disturbing the peace after threatening to unleash his army of turtles on the town ….. FLORIDA (https://bit.ly/2VHvbSd)
GOOD NEWS: Brought to you by #GiftCardChallenge GiftCardChallenge.org