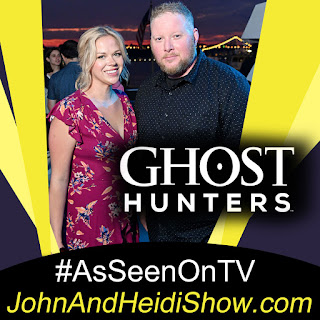 Today we talk with Richel Stratton and Brian Murray about Season 2 of Ghost Hunters on A & E. In season 2 of A&E’s Ghost Hunters, the team heads into uncharted territory to be the first to investigate reports of paranormal phenomena in some of the nation’s most remote locations. Their journey takes them to isolated, distant corners of the United States where they confront extreme conditions and desolate terrain. The team seeks out forgotten worlds where darkness and death plague residents who have been forced to live with the unknown.

Despite mysterious and unnerving warnings from locals, the Ghost Hunters face their fears and stay on mission: to help people confront terrifying paranormal encounters that have shaken them to their core. In doing so, they capture their most compelling, persuasive evidence in over a decade. New episodes of Ghost Hunters will air Wednesdays at 9pm ET/PT following the two episode premiere on April 8 beginning at 8pm ET/PT.

Paranormal investigator Richel Stratton has been ghost hunting for a decade, with most of her investigations conducted independently. She joined her most recent team in Illinois two years ago and has participated in over 40 investigations with the group ranging from private residences to historic haunted locations like the once-spectacular Mineral Springs Hotel, former psychiatric hospital Ashmore Estates, and the storied Malvern Manor. As an investigator, Richel believes there are things out there we don’t fully understand, but she needs hard evidence to prove a haunting is real.

Former Marine Corps Platoon Sergeant Brian Murray is a paranormal investigator on the “Ghost Hunters” team. Brian uses his military experience to bring an organized, structured approach to each investigation, from creating a plan and assigning tasks to overseeing “the mission” from start to finish. Brian founded his most recent team, Riverbend Paranormal, in 2007 and has conducted more than 200 investigations, many of them in private homes. Brian values the importance of evidence review as an arduous multistep process and believes that, “in this business, nobody has all the right answers except for the dead themselves.”
For more info, visit: https://www.aetv.com/shows/ghost-hunters

THIS IS YOUR BRAIN ON DRUGS: Brought to you by TimeForRehab.com!
Each day we share stories about people doing dumb things under the influence, but ADDICTION IS NO LAUGHING MATTER! If you or someone you know needs help, we're here! Learn more at TimeForRehab.com.
A Vancouver student and his instructor had a rather unexpected end to a driving lesson after the driver ran through a stop sign before failing a roadside sobriety test. Mounties in Coquitlam, British Columbia said they pulled over a driver's ed vehicle after the car went through a stop sign. The 44-year-old male driver also failed a roadside sobriety test issued by a traffic enforcement officer. “This may be a funny story, but we're serious about keeping our community safe,” said Cpl. Michael McLaughlin in a news release. Not only did the student have his learner's license suspended for ninety days, he also received a ticket for failing to stop at the stop sign. The instructor also faced consequences and had his car impounded for ninety days. (https://bit.ly/2X7noRv)

The game show “Lets Make A Deal” had its highest rated week ever during last week’s Coronavirus lockdown. (https://bit.ly/2R0zt7e)

Lindsay Lohan announced that she has a new song coming out called “Back To Me.”(https://pge.sx/2X41iPz)

Former Major League Star Jim Edmonds revealed that he’s feeling great after catching the Coronavirus two weeks ago. Edmonds was married to one of the “Real Housewives of Orange County”. (https://pge.sx/3aHe9vk)

In Scotland, a man was sitting in the passenger seat of the car while his girlfriend was driving. After he had complained for a solid hour about the way she drove, she stopped the car, switched places with him, and let him take the wheel. He promptly drove the car into a tree. On top of that, when the cops came they gave him a ticket for driving without a license.

A guy in England ran a marathon in his backyard.

Scientists at Stanford University have created a “smart toilet” that recognizes your butt print and can detect early signs of cancer.(https://bit.ly/2yG3NgV)

A group of McDonald’s drive-thru workers in Los Angeles staged at a walkout over the unsafe conditions they’ve encountered during the Coronavirus pandemic. (https://bit.ly/3aQdiIA)

New Jersey Police arrested a Pink Floyd cover-band after they staged a concert on their front lawn that thirty people attended. The band was playing “Have A Cigar” when cops arrived. (https://bit.ly/2wlOXeI)

In Colombia, crowds have been flocking to pray at a tree where an image of Jesus has appeared. (https://bit.ly/2XhJGjt)

The White House is urging Americans to avoid grocery shopping this week while the Coronavirus is hitting its apex. (https://bit.ly/2V68o3J)

Humans aren't the only species to adopt. We've seen the heartwarming videos of dogs nursing baby squirrels back to health—and that's actually much more common than we think. It becomes mutually beneficial to have more furry friends in the group to take on other roles in survival—whether that be hunting, gathering, or just simply cute companionship. Though the phenomenon isn't completely understood, it's clear that both humans and animals have an instinct to care for others.

Dateline.... HONG KONG
Two Pandas at the Hong Kong Zoo are using the lockdown privacy to breed after refusing to do so for over ten years. (https://yhoo.it/3aSUXe2)

Police last night broke up a funeral in New Jersey and charged fifteen men--including a 100-year-old mourner--with violating the state’s ban on public gatherings during the coronavirus crisis. According to police, officers found “about sixty to seventy individuals gathered for a funeral” on a street corner in Lakewood around 6:30 p.m. When cops sought to disperse the individuals who had gathered, “the crowd became unruly and argumentative.” Police subsequently charged fifteen men with violating the coronavirus safety order. The busted group included Nossom Strulovic, a 100-year-old resident of Lakewood. Police in the south Jersey township have cited dozens of individuals for gathering in defiance of the state mandate. Lakewood, which includes a significant population of Orthodox Jewish residents, has seen a higher percentage of COVID-19 cases than other areas in Ocean County. Law enforcement officials have expressed frustration that some members of the Orthodox community have prioritized religious gatherings over the state’s stay-at-home order. (https://bit.ly/345WTNI)

A man in Jacksonville, Florida was arrested after he allegedly sprayed a bottle of what he claimed to be COVID-19 on the doors of a local business. According to the Jacksonville Sheriff's Office, deputies were dispatched to the business on Sunday just before noon after getting reports of an intentional coronavirus contamination incident. Witnesses said the man, David White, went up to the business with a container labeled “COVID-19.” While the man went into the business, he allegedly sprayed the doors and the surrounding area with the unknown substance. White reportedly told employees and patrons in the area that they were now infected with coronavirus. The Jacksonville Sheriff's Office said White was arrested under these provisions: Manufacture, possession, sale, delivery, display, use, or attempted or threatened use of a weapon of mass destruction or hoax weapon of mass destruction. (https://bit.ly/2UwuHQQ)

FAKE NEWS.... OR FLORIDA?!
I read a headline, you guess if the story is something that really happened in the great state of FLORIDA or is it #FakeNews made up to trick you and amuse me
An Orlando Sheriff’s Deputy who was investigating a shoplifting incident at a Walmart was busted for shoplifting ….. FAKE NEWS
GOOD NEWS: Brought to you by #GiftCardChallenge GiftCardChallenge.org

Every Animal At Chicago Animal Control Has Been Adopted
https://www.sunnyskyz.com/good-news/3732/Every-Animal-At-Chicago-Animal-Control-Has-Been-Adopted