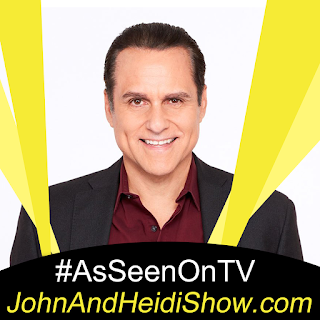 Today we visit with Maurice Benard, the longtime star of the ABC soap opera General Hospital, is a two time Emmy Award-winning film and television actor and an advocate for mental health awareness. We chat about his poignant memoir NOTHING GENERAL ABOUT IT: How Love (And Lithium) Saved Me On and Off General Hospital. Maurice opens up about his lifelong struggle with mental health. The result is a shocking, candid, and motivational story that offers lessons in perseverance-of the importance of believing in and fighting for yourself through the darkest of times. https://amzn.to/3aEfpye

A survey found that anti-anxiety medication prescriptions have spiked by 34% during the Coronavirus pandemic. (https://on.mktw.net/34PUDKT)

THIS IS YOUR BRAIN ON DRUGS: Brought to you by TimeForRehab.com!
Each day we share stories about people doing dumb things under the influence, but ADDICTION IS NO LAUGHING MATTER! If you or someone you know needs help, we're here! Learn more at TimeForRehab.com.
A man brandished a gun and threatened a person playing the Easter Bunny who was waving to motorists from an interstate overpass in Ohio. A 49-year-old man was arrested Wednesday afternoon in Middlebourne. He was given a breath-alcohol test at an Ohio State Highway Patrol post but was taken to a medical facility when jail officials refused to book him because of an elevated temperature, leading to concerns he might be infected with the Coronavirus. Guernsey County Sgt. Jason Best on Friday said the man could face charges of aggravated menacing and improper handling of a firearm in a vehicle. Deputies found the suspect and another man sitting inside a camouflage-painted pickup truck parked at the edge of a field shortly after receiving a call about the Easter Bunny threat. A .22-caliber handgun and an open 12-pack of beer were seized as evidence. Deputies said the man slurred his words and smelled of alcohol. (https://bit.ly/2RAiQPY)

The five most-watched TV programs of the week last week were ALL “ABC World News Tonight with David Muir.” (https://bit.ly/3biwHCs)

“Tiger King” star Joe Exotic is in talks to broadcast a radio show from prison.
(https://bit.ly/3cmeK5O)

A pink sequin shirt belonging to “Tiger King” star Joe Exotic has gone up for sale on eBay. (https://bit.ly/2Kq8bmJ)

A video of a bench clearing brawl that broke out during opening day of the Chinese Baseball League has gone viral. (https://bit.ly/3ai5xKB)

Two million chickens will be slaughtered at a Delaware farm because of staff shortages due to the Coronavirus.(https://bit.ly/2wKxWex)

Federal Authorities may need to track people’s health and location data through a smartphone app in order to let people return to work. (https://bit.ly/2VatQWf)

A phone survey by The University of Phoenix found that 4 in 10 Americans are lonely due to the Coronavirus lockdown. (https://bit.ly/2VuIsPf)

A CDC study found that the more you walk the less likely you are to die prematurely. (https://bit.ly/3cdGedY)

Eight people who attended a weekly poker game in Florida have all been infected with Coronavirus. (https://bit.ly/2VKgG1B)

The Ruth’s Chris Steakhouse Chain has received a $20 million bailout from the Coronavirus Aid Program. (https://on.wsj.com/2Vauz9T)

There may be 2,000 active serial killers in the U.S. right now. Thomas Hargrove has been archiving homicides for years through his Murder Accountability Project. Through his experience, he came up with an algorithm that found patterns in recent unsolved murders linked to at least one other murder through DNA. This allowed him to estimate the number of unsolved cases in the U.S. at any given time. According to the New Yorker, he believes that the number of active serial killers in the U.S. is around 2,000.

Dateline.... BRAZIL
A Brazilian Judge was seen shirtless during a court session on Zoom.
(https://bit.ly/2VFCdIK)

An Italian woman who took her pizza-sized turtle out for a walk has been fined 400 euros by the Roman police for breaking strict Coronavirus confinement rules. Italians need a justifiable reason to be out on the street in the middle of a pandemic that has officially claimed more than 20,000 lives in the Mediterranean country since February. Taking your dog out for a walk is viewed as a good enough reason to leave your home. But it seems taking your turtle out for one is not. The Roman police said “the 60-year-old woman was caught outside her home without a justifiable reason” and fined. “The woman was walking with a turtle,” the police statement said. Roman police spokesman Nunzio Carbone told AFP that the woman was fined 400 euros because it was “not a justifiable excuse.” (https://yhoo.it/3eiYGUp)

A British police department posted a reminder on Twitter not to call the emergency number to report a neighbor for snoring. The Essex Police's communications officer tweeted that a call came in Sunday to the department's 999 emergency number reporting that the caller could hear someone snoring loudly. "An unusual 999 call at this time of the day, caller reporting they can hear someone snoring. Advice was given to them and snoring is never a reason to call 999, no matter how annoying it is,” the officer tweeted. The tweet used the hashtag “#emergenciesonly,” reminding the public that the 999 number is only for reporting emergency situations. (https://bit.ly/2VqD7sk)

FAKE NEWS.... OR FLORIDA?!
I read a headline, you guess if the story is something that really happened in the great state of FLORIDA or is it #FakeNews made up to trick you and amuse me
Police in Jupiter, Florida arrested a mother after her daughter wore her purse containing three pounds of marijuana to school ….. FAKE NEWS
GOOD NEWS: Brought to you by #GiftCardChallenge GiftCardChallenge.org

Students Use Money For End-Of-School Trip To Help Family Who Lost Home And Farm In Fire
https://www.sunnyskyz.com/good-news/3752/Students-Use-Money-For-End-Of-School-Trip-To-Help-Family-Who-Lost-Home-And-Farm-In-Fire