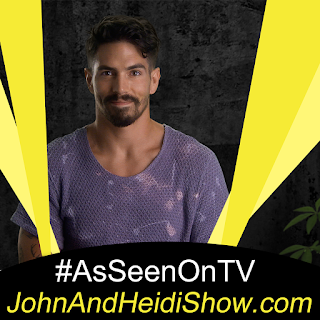 Today we talk with Jordan Wisely from MTV’s The Challenge: Total Madness. The show that invented the reality competition genre is back for its landmark 35th season. This season, 28 players will face the most insane and strenuous challenges ever devised in pursuit of the $1 million-dollar prize. With a shocking twist and grueling mental warfare, who will take home the million dollars and who will succumb to madness? Jordan Wisely is a six-time competitor on The Challenge and is the reigning champion after winning last season’s “War of the Worlds 2.” Jordan – a 29-year-old actor & fashion designer who first rose to fame as a cast member of MTV’s The Real World: Portland – will discuss the mentally and physically grueling challenges competitors will face this season and what made this season the daunting and dangerous in the show’s 22-year history. http://www.mtv.com/shows/the-challenge-total-madness

THIS IS YOUR BRAIN ON DRUGS: Brought to you by TimeForRehab.com!
Each day we share stories about people doing dumb things under the influence, but ADDICTION IS NO LAUGHING MATTER! If you or someone you know needs help, we're here! Learn more at TimeForRehab.com.
A New Jersey man broke into an Old Forge funeral home last Saturday night, stripped naked, and left a cold beer in a display casket. 30-year-old Ethan Palazzo is charged with burglary, criminal trespass, and criminal mischief. Police said Palazzo kicked open the side door to the Thomas P. Kearney Funeral Home. Palazzo, who smelled of alcohol, told police he did not have a reason for breaking in, then said he just wanted to speak with his girlfriend. He was nude when he was arrested. Police said he stripped naked inside the funeral home and left his clothing on the floor of the morgue and office. He also appeared to have rifled through the closet containing the morgue’s chemicals, though it was not clear if he took anything. Police found a cold bottle of beer inside one of the display caskets. Police also believe Palazzo rummaged through a car parked outside and left behind an open can of Natural Ice beer in the center console. (https://bit.ly/2VlVtvI)

Sofia Vergara shared a throwback video of herself in a bikini that shows her frolicking on the beach in the 90’s. (http://dailym.ai/2K9a2wc)

San Francisco police shut down an underground nightclub that was operating in defiance of the shelter in place orders. (https://bit.ly/2RH8BJI)

Brazilian Officials are projecting a doctor’s coat onto the “Christ The Redeemer” statue to honor healthcare workers. (https://bit.ly/3ageFz3)

A video of a pregnant Georgia woman who car-jacked a news van with a reporter still in it and lead police on a high-speed chase has gone viral.
(https://bit.ly/3eiDBJA)

Newly released court documents show that Jussie Smollett was in a relationship with one of his attackers and they frequently visited an upscale Chicago bath-house together. (https://pge.sx/3cmeMKY)

Jimmy Webb, the beloved rock n’ roll clothing store owner of “Trash and Vaudeville” in New York, has died at the age of 62. He dressed every rock star from Iggy Pop to Guns n’ Roses. (https://bit.ly/3adD2xB)

Las Vegas casino executives are planning new safety measures for blackjack players. Casino life is gonna be way different. You have to sit one seat apart at the blackjack table. (https://bit.ly/34HJMlY)

One man was once constipated for nearly two months. In 1965, 26-year-old Angus Barbieri, who weighed 456 pounds, was put on a fasting program. It wouldn't be ethical to conduct a study like this today, but at the time, things were different, allowing Barbieri's doctor, William Stewart, to experiment. On a strict regimen of multivitamins and minerals, Barbieri got his nutrients without eating a scrap of food, which resulted in nearly two months of constipation. By the end of the year, Barbieri was 180 pounds. (Note: Fasting to this degree is not recommended, as it can lead to serious health conditions.)

Dateline.... ENGLAND
A photo of a British man who beat the Coronavirus after wearing a Buzz Lightyear style helmet in the hospital has gone viral. (https://bit.ly/34HYZDG)

According to reports, a desperate family tried to sneak a dead relative out of their Coronavirus-ravaged city in Ecuador — by pretending he was asleep in the car. Video footage obtained by El Comercio shows heavily armed troops stopping the blue jeep at a checkpoint leaving Guayaquil, the city that has been devastated by the pandemic. The military officers repeatedly instruct the four other passengers to wake up the supposedly sleeping man slumped in between two others in the back — with the family insisting he is just sleeping, El Comercio says. “He has just died,” one of the relatives finally admitted. With COVID-19 brutalizing the city, it was initially feared the 62-year-old man had succumbed to the disease. But officials told Mi Diario that Pedro Washington Víctor Ramírez died from a heart attack blamed on diabetes.
(https://bit.ly/3b7DGhg)

Like many quarantined twentysomethings, a Florida Woman and her girlfriend were passing the day online yesterday when a “verbal altercation” over TikTok videos allegedly turned violent, leading to a domestic battery arrest. According to cops, 23-year-old Ashley Stupi slapped her 24-year-old girlfriend “with open hands” during a scuffle Tuesday afternoon in the victim’s St. Petersburg apartment. The victim, cops reported, sustained “minor scratches on her arms and legs.” The women had been arguing “over ‘Tik Tok’ videos” when the dispute escalated, according to an arrest affidavit. A cop noted that there is “video of a portion of the incident” between Stupi and the victim. Stupi was arrested on a misdemeanor domestic battery charge and booked into the Pinellas County jail. Cops said that Stupi and the victim have been in an on-and-off relationship for three years. (https://bit.ly/2K9Nn36)

FAKE NEWS.... OR FLORIDA?!
I read a headline, you guess if the story is something that really happened in the great state of FLORIDA or is it #FakeNews made up to trick you and amuse me
An Orlando woman was caught on video shaving her legs as she rode on the back of a motorcycle ….. FLORIDA (https://bit.ly/2V4EP56)