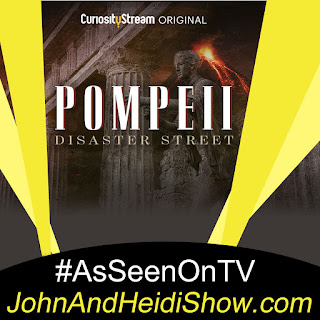 A survey found that Coronavirus lockdowns have lead to a surge in phone calls, with more people making them as opposed to texting. (https://bit.ly/2JchGFQ)

THIS IS YOUR BRAIN ON DRUGS: Brought to you by TimeForRehab.com!
Each day we share stories about people doing dumb things under the influence, but ADDICTION IS NO LAUGHING MATTER! If you or someone you know needs help, we're here! Learn more at TimeForRehab.com.
The Polk County Sheriff’s Office has arrested a man for multiple drug charges and fleeing to elude after failing to stop at an intersection. According to arrest affidavit, deputies arrested 59-year-old Jerry Sanders of Auburndale, Florida after he allegedly failed to stop at an intersection. The deputy, in a patrol car, put his lights on and initiated a traffic stop. The sedan allegedly attempted to flee, but shortly swerved off the road. According to the affidavit, the deputy noticed partially smoked marijuana joints and a rolled-up dollar bill in the center console. Sanders was taken into custody. The deputy noticed as he escorted Sanders out of the car that he was totally naked and had string wrapped around his body. He was also found to have string tied to his penis and testicles. The deputy asked Sanders why he fled. Sanders allegedly replied “because I was naked.” (https://bit.ly/2Ugicc4)

Bob Dylan released a seventeen-minute song about the JFK assassination on Friday. (https://bit.ly/2Jkw66O)

A Royal Footman who is in regular contact with the Queen has tested positive for the Coronavirus. People are worried about the Queen because she’s 93.
(https://pge.sx/2WQZAkx)

A New Hampshire (Manchester) man has been accused of grabbing a sword and chasing after another man who asked him to turn down his music. A man knocked on the door of Benjamin Layland on Monday. Layland reportedly became upset and grabbed the 2½ foot sword. He allegedly chased the man down a hall. The man got away and there were no injuries.

FUN FACT FOR YOU:Share this with your friends... they'll think you're really smart!
Saudi Arabia imports camels from Australia. Saudi Arabia is known for its vast expanse of desert, so it may seem unbelievable that they rely on Australia to supply them with animals that dominate their landscape. Australia originally had camels imported to be used for transporting heavy loads or for riding. They were let loose when their work was done, causing an unwanted spike in their population. Australians then sold the camels back to desert-based countries like Saudi Arabia, which use camels at a much higher volume.

Japanese Prime Minister Shinzo Abe postponed the Summer Olympics for one year because of the Coronavirus outbreak. (https://yhoo.it/3diTf7r)

The Tokyo Summer Olympics have been moved to July and August of 2021.
(https://yhoo.it/39tef8f)

State Police out of Ridgway, Pennsylvania have charged a Dagus Mines man after allegedly breaking into his parent’s home while they were in Florida. The incident happened just before 11:00 a.m. on March 18th. Police report that 43-year-old Michael Knepp was advised to stay off of the property while his parents were in Florida. Police report that Knepp had stolen frozen meatballs and chocolate chips. Knepp is now facing charges for burglary, criminal trespassing, theft, and receiving stolen property. (https://bit.ly/2JggLnR)

A Maryland man was arrested on Friday night for violating a state coronavirus order when he hosted a massive bonfire party. 41-year-old Shawn Marshall Myers was busted after refusing multiple orders to disperse the crowd of sixty people at his Hughesville home. The sheriff’s office said Myers was charged with failure to comply with an emergency order implemented by Governor Larry Hogan barring gatherings of ten or more people to help curb the spread of coronavirus. Last Sunday, Myers also attracted the authorities for holding a similar large gathering, the sheriff’s office said. But when officers arrived that time, he agreed to kick out his company, authorities said. (https://bit.ly/3aw0wyK)

FAKE NEWS.... OR FLORIDA?!
I read a headline and Heidi (and you) need to guess if the story is FAKE NEWS or something that really happened in the state of FLORIDA.
A Port St. Lucie man was arrested fifteen minutes after being released from jail for burglarizing cars in the jail’s parking lot ….. FLORIDA (https://bit.ly/2I3xH2j)
GOOD NEWS: Brought to you by BetterCreditCards.com

Teacher Who Disarmed A Student And Hugged Him Will Receive The Medal Of Honor Citizen Honor
https://www.sunnyskyz.com/good-news/3721/Teacher-Who-Disarmed-A-Student-And-Hugged-Him-Will-Receive-The-Medal-Of-Honor-Citizen-Honor
Newer Post Older Post Home