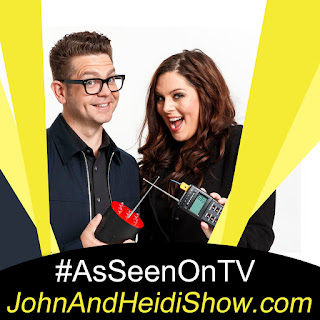 Katrina Weidman is a paranormal researcher and investigator, host and producer of Travel Channel’s “Portals to Hell”. Travel Channel’s series, Portals to Hell, television personality and executive producer Jack Osbourne, and paranormal researcher and investigator Katrina Weidman, join forces to explore especially sinister places purported to be doorways to the spirit underworld, investigating each haunted location in search of irrefutable evidence that a spirit world exists, and death is not the end. In each episode, Osbourne and Weidman dive headfirst into a different historical site, examining unusual incidents while utilizing specialized technology and a network of experts to help document and uncover the truth. https://www.travelchannel.com/shows/portals-to-hell

SURVEYS, STUDIES & SUCH: Brought to you by BetterCreditCards.com
A survey found that New York City is facing a shortage of rescue dogs, as people have been adopting them like crazy during the lockdown.
(https://bit.ly/3amVJjg)

THIS IS YOUR BRAIN ON DRUGS: Brought to you by TimeForRehab.com!
Each day we share stories about people doing dumb things under the influence, but ADDICTION IS NO LAUGHING MATTER! If you or someone you know needs help, we're here! Learn more at TimeForRehab.com.
According to the Jefferson County, Arkansas Sheriff's Department, Steven Glover is facing charges after attempting to smuggle drugs and paraphernalia into the W.C. “Dub” Brassell Detention Center. At 2:45 a.m., while conducting surveillance of the outer perimeter of the detention center, a deputy observed Glover approaching a gate of the jail, attempting to cut the gate. As the deputy approached Glover, he attempted to flee, but was soon apprehended by the deputy. The deputy recovered several vacuum sealed bags of tobacco, several packages of bugler tobacco, rolling papers, three cell phones, and five ecstasy pills. Glover is charged with attempted furnishing of prohibited articles, fleeing, instrument of crime, and possession of controlled substance with purpose to deliver ecstasy. (https://bit.ly/3ajSYiv)

BIG SCREEN-LITTLE SCREEN: Brought to you by ChannelSurferTV.com
Tracy Anderson, the personal trainer who’s worked for Madonna and Gwyneth Paltrow, is live-streaming her own workouts on Zoom during lockdown.
(https://pge.sx/3arso77)

Savannah Guthrie is back in “The Today Show” studio after self-quarantining at home for two weeks. (https://pge.sx/2xFkIj4)

SeaWorld is furloughing all of its 15,000 workers indefinitely as parks close because of the Coronavirus. (http://dailym.ai/2UIdkLO)

A 101-year-old Italian man who was born during the Spanish Flu has recovered from the Coronavirus. (https://bit.ly/2UtIebX)

A video of a Ukrainian bus passenger being attacked after he coughed has gone viral. (https://bit.ly/3bEtpc7)

A study by the Associated Press has debunked over two hundred Coronavirus remedies that have been posted on social media since the outbreak began.
(https://bit.ly/2UM2tAB)

A study by Johns Hopkins University found that rural counties are less likely to get hit by Coronavirus than more populated ones. (https://bit.ly/2JsztII)

The State of Florida is setting up highway check points to stop New York motorists who are fleeing the Coronavirus. (https://bit.ly/2JD6AtL)

The Federal Trade Commission has received over 7,283 complaints about Coronavirus-related scams in which people sold fake cures. (https://bit.ly/2UxNFqk)

Political Insiders now believe the Coronavirus could force us to expand our mail-in voting options. (https://bit.ly/2JqaDtc)

FUN FACT FOR YOU:Share this with your friends... they'll think you're really smart!
One man once survived two atomic bombs. Tsutomu Yamaguchi survived both nuclear attacks to Japan when the U.S. dropped atomic bombs during World War II. Yamaguchi, sent to Hiroshima on business on August 6th, 1945, saw the U.S. drop the first atomic bomb. Miraculously, he survived with burns across his face and arms, but made it home to Nagasaki. Three days later, the second atomic bomb hit, flattening Yamaguchi's home. Because his family was out finding ointments to treat his already existent burns, they were safe in a tunnel and miraculously survived as well.

A Vietnamese Airline is promising to pay customers $8,000 if they catch Coronavirus during a flight. (https://bit.ly/2JfalVJ)

A New Jersey couple has been arrested for allegedly stealing six golden retriever puppies worth about $5,000. 41-year-old Jennifer Goldthwaite and 20-year-old Christopher Gordon were busted late Saturday after a dog breeder in Pennsylvania told cops that people were trying to enter his property and possibly steal his French bulldog puppies for sale. Responding officers found Goldthwaite in a car outside the breeder’s home, while Gordon was walking up to the vehicle. The man who called police identified the pair as the people who took a look at his young pooches earlier that day. Officers spotted a box inside the car containing six golden retriever puppies. Goldthwaithe insisted the pups belonged to her, but detectives got in touch with local breeders and tracked down the real owner of the dogs — who was unaware they had been dognapped. The pair, who were charged with burglary, theft and criminal conspiracy, have been released from custody after posting $25,000 bail.
(https://bit.ly/2xktqTR)

A 23-year-old Texas man arrested for lying about testing positive for the new Coronavirus told investigators he did so as a “social experiment.” Michael Lane Brandin of Woodville, in East Texas, was charged with false alarm or report, a class A misdemeanor. Tyler District Attorney Lucas Babin said Brandin intentionally posted on Facebook that he had tested positive for COVID-19, causing a panic and tying up phone lines at Woodville’s Tyler County Hospital. Brandin allegedly told investigators that he made the post as a ‘social experiment’ to make the point that not everything one reads online can be believed. The district attorney posted earlier this week on Facebook that such claims could be a criminal offense. (https://bit.ly/3bnEZIH)

FAKE NEWS.... OR FLORIDA?!
I read a headline and Heidi (and you) need to guess if the story is FAKE NEWS or something that really happened in the state of FLORIDA.
A Bradenton Walmart manager was arrested for shoplifting 25,000 worth of Spam over the course of five years after security uncovered an elaborate smuggling operation ….. FAKE NEWS
GOOD NEWS: Brought to you by BetterCreditCards.com