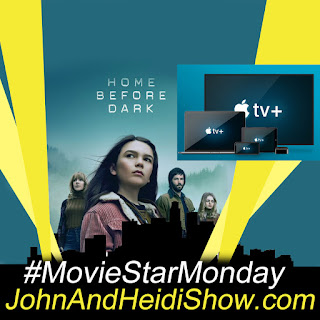 This #MovieStarMonday we visit with Jim Sturgess and Brooklynn Prince from “Home Before Dark” Inspired by a True Story, A Nine-Year-Old Reporter Unearths a Dark, Buried Secret in the New Dramatic Mystery Series HOME BEFORE DARK on Apple TV+ All 10 episodes available now.

Nine-year-old Brooklynn Prince stars as real-life aspiring journalist Hilde Lysiak who inspired this story. When Hilde & her father (Jim Sturgess) leave New York for the small lakeside town he once left behind, her dogged pursuit of the truth leads her to uncover a cold case that the entire town, including her father, tried hard to bury. Home Before Dark is available for on-demand streaming on AppleTV+.

When she was 7 years old, Brooklynn Prince starred in 2017’s The Florida Project with Willem Dafoe, a role that earned her fourteen acting awards from groups such as the Broadcast Film Critics Association and the Hollywood Critics Association. She also starred in the horror film The Turning, and will next star in Disney’s The One and Only Ivan with Angelina Jolie and Sam Rockwell.

English actor Jim Sturgess starred in multiple films including the musical Across the Universe; 21 with Kevin Spacey and Laurence Fishburne; The Other Boleyn Girl with Natalie Portman and Scarlett Johansson; and Cloud Atlas with Tom Hanks and Halle Berry to name just a few.

A new survey found that divorces have surged in China after the lockdowns.
(https://bit.ly/2RkV6PF)

THIS IS YOUR BRAIN ON DRUGS: Brought to you by TimeForRehab.com!
Each day we share stories about people doing dumb things under the influence, but ADDICTION IS NO LAUGHING MATTER! If you or someone you know needs help, we're here! Learn more at TimeForRehab.com.
A Florida man was shot by a mother of three after deputies say he broke into her Deltona, Florida home early Tuesday morning, March 31st because he thought that dinosaurs were chasing him. Officials with the Volusia County Sheriff’s Office said this happened at a home on the 2600 block of Libby Court. According to deputies, 32-year-old Joseph Roberts tried to break into the home around 5:45 a.m. by shattering a front window. “The woman inside, a 42-year-old mother with several teenagers in the house, called 9-1-1, saying, ‘I don’t want to shoot him, but I’m going to have to! Get out of my window! Get out of my window!'” Sheriff Mike Chitwood said during a press conference that the mother gave White several verbal warnings to leave. When he didn’t, she opened fire. “He told us that the dinosaurs were chasing him and he thought he got some bad weed,” said Chitwood. Chitwood added that they were seeking an enhanced penalty for committing a burglary during a national emergency. (https://bit.ly/2wNcoOw)

Tiger King star Carole Baskin says she DID NOT put her first husband in a meat grinder. Meanwhile, the Hillsborough County Sheriff’s office has reopened the case based on interest from the Netflix Series. (https://bit.ly/2Jxy5F2)

O.J. Simpson has weighed in on “Tiger King.” The NFL’s all-time leader in rushing yardage and fleeing yardage says there’s not a shred of doubt that Carole Baskin killer her husband. (http://dailym.ai/39Fj5iG)

Netflix is adding one more episode of “Tiger King” that’s expected to be released soon. The news was announced by cast member Jeff Lowe, who encouraged people to “Put your mask on.” (https://bit.ly/3aMgNzQ)

Investigation Discovery is launching a Tiger King spinoff that will focus on the disappearance of Carole Baskin’s husband. (https://bit.ly/2JJKFkq)

Researchers from OnlineCasino.CA have developed a model of what avid Video Gamers will look like in twenty years if they don’t change their habits. The model shows them being fat with bad posture. (https://bit.ly/2xWEebi)

A study by eTORO found that Andrew was the top earning name for Boys in 2019. Anna was the girl name that made the most money off of investments in 2019. (https://bit.ly/2V6oPgh)

L.A. Mayor Eric Garcetti is encouraging people to rat out neighbors who break quarantine, saying that “Snitches get riches.” (https://fxn.ws/2wXnoZI)

Two Utah children were briefly hospitalized after eating marijuana gummies that were inside a meal they received from a local food bank. (https://bit.ly/2V5kr1a)

Queen Elizabeth addressed her nation on primetime television last Sunday for just the fourth time in her reign. She gives a National Address at Christmas every year, but this is the fourth time she’s done this for other reasons. She did it at the start of the Gulf War in 1991, after Princess Diana’s death in 1997, and after her own Mother’s death in 2002. Last night was her first address in the Social Media age. (https://bit.ly/2UJbOtY)

“The National Bobblehead Hall of Fame” is honoring Dr. Anthony Fauci with his own bobblehead doll. (https://bit.ly/2R65avO)

Google has banned all political ads related to the Coronavirus.
(https://bit.ly/2ymY1R8)

France has a dozen time zones. The country with the widest stretch of land, Russia, spans 11 different time zones. France, though, technically has the most, clocking in at 12—but that's due to the fact that its territories are dispersed in various parts of the world. The U.S. ties with Russia in second, but not all time zones are inhabited. So, Russia is the only place in the world where one citizen could be waking up at 8:00 a.m. and another could be going to bed at 11:00 p.m.

Dateline.... CHINA
The City of Shenzhen has become the first Chinese City to ban eating cats and dogs. This was the Mayor’s idea. The Mayor says he’s trying to change the world. (https://bbc.in/34dcf2R)

Some folks will do anything to defy a near-global order to stay home and engage in social distancing during the Coronavirus pandemic. Take one crafty home lockdown dweller, who went incognito as a shrub just to go outdoors without being caught. Nicholas Murray and Madeline Mai-Davies, a young couple from Stevenage in the UK, say they caught a neighbor attempting a bushy breakout and captured the stunt on camera. They shared the clip on TikTok, garnering more than 700,000 views on the app. Murray also shared two different clips of the prank, grabbing another 122,000 views. In the video, a bush with two legs can be seen scuttling from the top of their driveway down to the neighborhood drag. In one post, Murray says, “Next door neighbor has taken things to new extremes.” (https://bit.ly/3dMafTC)

A 99-year-old New Jersey man has been charged with violating the state’s Coronavirus emergency regulations, according to police who this afternoon broke up an engagement party attended by the nonagenarian and his relatives. Responding to a 4:30 p.m. call about an illegal social gathering, cops found party attendees on the front lawn of the Lakewood residence of 47-year-old Yaakov Kaufman, and 45-year-old Eti Kaufman. The Kaufmans, who were hosting the engagement party, also had guests inside their home. In addition to being charged with violating a recent executive order barring such gatherings, the Kaufmans were also each hit with a half-dozen child endangerment counts since the couple’s six minor children were at the party. Among the eight other adults charged with violating the emergency declaration was Michael Zimmerman, a 99-year-old resident of Lakewood, a south Jersey township.
(https://bit.ly/3aw8mbI)

FAKE NEWS.... OR FLORIDA?!
I read a headline, you guess if the story is something that really happened in the great state of FLORIDA or is it #FakeNews made up to trick you and amuse me
A massive fire burned 3,500 rental cars at the Fort Myers Airport in Florida. Police say the fire caused $2 million in damage. (https://bit.ly/2JKUK0s)
GOOD NEWS: Brought to you by #GiftCardChallenge GiftCardChallenge.org