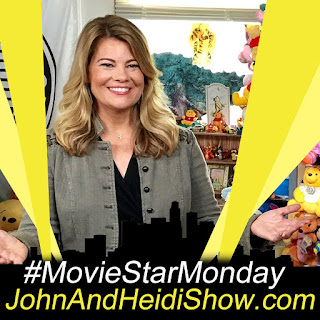 This #MovieStarMonday we visit with actress, author and life coach Lisa Whelchel. Best known for her starring role as Blair Warner on NBC's The Facts of Life, which first aired from 1979-88, Whelchel began acting as a Mouseketeer for Walt Disney's The New Mickey Mouse Club at age 13. She recently returned to television to host the new original series Collector's Call on America's No. 1 classic television network, MeTV. Collector’s Call airs Sunday nights.

SURVEYS, STUDIES & SUCH: Brought to you by BetterCreditCards.com
A survey found that calls to the National Suicide Hotline have risen by 300% since the Coronavirus lockdown began. (https://hrld.us/3aqGw0w)
THIS IS YOUR BRAIN ON DRUGS: Brought to you by TimeForRehab.com!
Each day we share stories about people doing dumb things under the influence, but ADDICTION IS NO LAUGHING MATTER! If you or someone you know needs help, we're here! Learn more at TimeForRehab.com.
For Jahrea Raheem Wallace, a desperate time allegedly called for a desperate measure. The 25-year-old Floridian--seated in the rear of a police cruiser after being arrested following a 2:40 a.m. traffic stop--sought to dispose of some narcotics on his person. Well, actually, in his person. According to an arrest affidavit, a vehicle cam captured Wallace last month “eating a bag of drugs he pulled from his butt.” Wallace then “proceeds to eat the baggy with the drugs.” When confronted by sheriff’s deputies, Wallace denied consuming the baggy, and then spit it out in front of a cop. The officer subsequently “swabbed the defendant’s mouth which tested positive for cocaine.” Charged with cocaine possession, providing a false name to cops, and tampering with physical evidence, Wallace was booked into the Pinellas County lockup. He was also hit with a probation violation charge in connection with a 2019 felony grand theft conviction. (https://bit.ly/39vi8cO)

BIG SCREEN-LITTLE SCREEN: Brought to you by ChannelSurferTV.com
“Jersey Shore” star Mike “The Situation” Sorrentino recorded a PSA in which he encourages Americans to stop throwing parties and shelter in place. (https://pge.sx/2UzFn1k)

Paris Hilton has delayed the release of her documentary because of the Coronavirus Pandemic. (https://pge.sx/2wENLU8)

The Mayor of Washington, D.C. is threatening anyone who breaks the Corona lockdown with ninety days in jail. (https://bit.ly/2UOB412)

A British Couple had their wedding canceled by the Coronavirus so they tied the knot by exchanging onion rings at a Burger King drive-thru. (https://fxn.ws/2yh4Cwq)

An Australian Astrophysicist was hospitalized after four magnets got stuck up his nose while he was trying to invent a device that would stop people from touching their faces. (https://bit.ly/3bFExWf)

The publishers of “The National Enquirer” have been forced to lay off staff during the Coronavirus downturn. (https://pge.sx/2V4jiaf)

A Vincent Van Gogh painting has been stolen out of a Dutch Museum that was closed because of the Coronavirus. The painting was titled “Spring Garden.” (https://bit.ly/3avonPd)

Disney is now closing its theme parks “until further notice” because of the Corona outbreak. (https://bit.ly/2vXLGlL)

The cast of Friends still earns around $20 million each year. When the show came to an end, the cast of the popular TV show Friends negotiated syndication rights for themselves. That means they receive a percentage of the revenue (2 percent) from reruns airing across all broadcasting companies. Since the much-loved TV show still pulls in around $1 billion of revenue, Courteney Cox, David Schwimmer, Jennifer Aniston, Lisa Kudrow, Matt LeBlanc, and Matthew Perry all make major dough each year for doing, well, nothing—$20 million is the estimate.

The President of Belarus is claiming that vodka and saunas can cure the Coronavirus. (https://bit.ly/33YJx5C)

A California conman, who allegedly claimed he created a cure for COVID-19 and tried to drum up investors in his bogus company by saying that NBA great Magic Johnson was on board, has been busted in the first federal coronavirus-related criminal case in the nation. 53-year-old Keith Lawrence Middlebrook was arrested by the FBI Wednesday night on a felony charge of attempted wire fraud in connection to the elaborate scam. The feds say that Middlebrook fraudulently solicited investments in Quantum Prevention CV Inc. or QP20. QP20 is a clearly phony company he claimed would be used to peddle pills that would prevent coronavirus infections and an injectable cure for those already diagnosed with the potentially deadly virus. Middlebrook faces a maximum of twenty years in federal prison. (https://bit.ly/33NXB1T)

26-year-old North Carolina nitwit Eugene Heffner is behind bars after being arrested for allegedly coughing at a Walmart shopper and then declaring that he had the Coronavirus. Heffner was at a Walmart near his home when he “purposely coughed at a customer” and claimed to be infected with COVID-19. After police were contacted about Heffner’s antics, he was arrested Friday evening on a misdemeanor public health charge since his “action could create fear in the customer and the public at large,” according to an arrest warrant. Heffner, who has not exhibited any coronavirus symptoms, appears to have been playing a prank on the Walmart shopper. He is being held in the Gaston County jail. According to court and prison records, Heffner is a convicted felon who is serving a two-year probation sentence for a 2019 conviction for breaking and entering in automobiles. (https://bit.ly/3ay4eIj)

FAKE NEWS.... OR FLORIDA?!
I read a headline and Heidi (and you) need to guess if the story is FAKE NEWS or something that really happened in the state of FLORIDA.
The parent of a Gainesville Girl Scout was busted for using the cookie order sheet as code for her marijuana business ….. FAKE NEWS
GOOD NEWS: Brought to you by BetterCreditCards.com

Hospital Cleaning Staff Surprised With Moving Round Of Applause