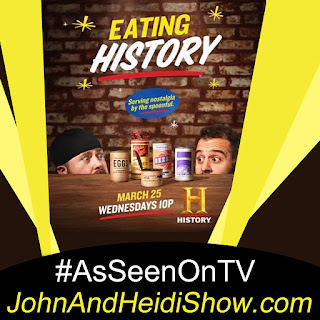 We talk with vintage food expert Josh Macuga. He and Old Smokey embark on a quest to uncover, unbox and eat the oldest, most nostalgic, and shocking foods to have survived history, in HISTORY’s new unscripted series Eating History. They take viewers back in time to find foods believed to have been lost to the past, and discover which eats have conquered time, revealing forgotten eras and the stories they hold as they explore history through old food.

A super computer at the Oak Ridge National Library conducted a study that identified seventy-seven drugs that could treat the coronavirus.
(https://bit.ly/2Jf4qjH)

THIS IS YOUR BRAIN ON DRUGS: Brought to you by TimeForRehab.com!
Each day we share stories about people doing dumb things under the influence, but ADDICTION IS NO LAUGHING MATTER! If you or someone you know needs help, we're here! Learn more at TimeForRehab.com.
A New Mexico man is facing charges after he told police he unknowingly stole two televisions while drunk. The Gallup Independent reports Sage Aaron Cummins was arrested last week shortly following his arrival to the victim’s apartment to return the TVs. According to Gallup police, an officer was investigating a burglary report when Cummins approached him and admitted he had stolen the televisions from the victim’s home. Cummins told police he was “very intoxicated” when he entered the residence. A police report says Cummins said he only remembered knocking on the door and, when it was apparent that no one was home, he entered the residence. Cummins says he did not remember what happened after that. The police report says “He woke up at 8:30 a.m. the next day and noticed he had two TV’s in his room.” The 24-year-old Cummins was arrested and charged with receiving stolen property. He was released on an unsecured bond of $1,500. (https://bit.ly/33wnp2p)

COUNCIL OF DADS is a new drama, based on the book of the same name, is about a family that loses its patriarch (Tom Everett Scott) to cancer and the three men in his life who step in to help raise his five children, who range in age from mid-20s to a newborn. Clive Standen, J. August Richards, Sarah Wayne Callies, and Michael O’Neill star.

Several stars from the Netflix series, “Tiger King,” are said to be furious with their portrayal in the show. If you haven’t seen it, one woman is accused of killing her husband, the other guy is accused of having eight sex slave wives, and the other guy marries three different men, breads cats illegally, and then hires a hitman to kill his rival. (https://pge.sx/2Um2Z9B)

Michele Williams and her boyfriend Thomas Kail may have secretly gotten married after they were seen wearing rings on their fingers in New York.
(https://pge.sx/39kck5Q)

Britney Spears reposted a piece that calls for the redistribution of wealth during the Coronavirus outbreak. (http://dailym.ai/2UlXveZ)

A New York Medical Consultant who worked on the movie “Contagion” has tested positive for the Coronavirus. (https://bit.ly/2UzeLMI)

Chloe Sevigny is eight months pregnant, but she won’t be able to have anyone accompany her in the delivery room because of New York’s new Coronavirus rules. (https://pge.sx/2UkDyoJ)

Newly released court records show that Michael Strahan’s ex-wife once had a yard sale with all his possessions while he was out of town playing football.
(https://pge.sx/2wFCz9F)

Earlier this month, Tito’s was warning drinkers that its vodka wouldn’t be an effective hand sanitizer to combat coronavirus, because the liquor is only 40 percent alcohol and sanitizer needs to be 60 percent. But the dream of a vodka hand sanitizer was not far from being realized. This week Tito’s announced that it would transform its distillery into a sanitizer production facility, filling a huge need as the country faces a shortage amid the pandemic.

Geologists have discovered the earliest known ancestor to most animals alive today, including humans. The organism lived 555 million years ago.

Toilet paper is a hot commodity right now. Fifteen years ago this week 14,000 rolls of TP were delivered to the Edward A. Rath County Office Building in Erie County, Pennsylvania. The toilet paper was donated by Proctor & Gamble. The company heard about a restroom supply shortage at the Rath Building and decided to make the donation. Erie County’s budget crisis made national news because of a shortage of supplies at the building. It was estimated that the toilet paper would last about two years.

Just Born Quality Confections, the candy maker that produces treats like Peeps, Mike and Ike, and Hot Tamales, has temporarily halted production amid the COVID-19 outbreak. Just Born says all Peeps products have been shipped to retailers ahead of the Easter holiday, so there should not be any shortages.

The fire hydrant patent was lost in a fire. The fire hydrant patent is credited to Frederick Graff Sr., who was the chief engineer for Philadelphia Water Works during the early 1800s. Unfortunately for Graff Sr., the patent was destroyed when the patent office in Washington, D.C., burned down in 1836. After 100 years, retired firefighter George Sigelakis reinvented the hydrant after they had been failing to work in too many critical emergencies.

Dateline.... ICELAND
Doctors in Iceland have discovered forty different mutations of the Coronavirus in patients. (https://bit.ly/2UEYc1S)

Some Americans have been stealing toilet paper from Interstate 80 rest stops in Nebraska because of shortages in stores across the U.S. According to the Lincoln Journal Star, citing the thefts, the state's Department of Transportation said it will be closing down some rest spots along I-80 when they have no attendant present. A spokeswoman told the local newspaper, “We're doing our best to keep them open, but we want to make sure when we do keep them open we have a safe location. With that becomes maintaining it and making sure it's in a good condition.” She also said travelers will be told when buildings are closed through Nebraska's information number. The novel coronavirus pandemic has let to panic buying by Americans, including toilet paper. This is leading to shortages in stores across the country. People in Oregon have even dialed 911 to report they have run out of toilet paper, according to USA Today.
(https://bit.ly/2Ubq66s)

A man accused of stealing thousands of respirator masks from a Portland business was arrested Saturday. Some of the stolen masks have been recovered and returned to the victim, who police say immediately donated the returned masks to local hospitals to help with the coronavirus outbreak. Police say 20-25 cases of N95 respirator masks were stolen Friday from The ReBuilding Center, located in Portland. Each case had 400 masks and the total loss was estimated to be nearly $2,500. The victim noticed an ad on Craiglist on Saturday for what she believed were the stolen masks. Officers showed up for the meeting and arrested the suspect, 42-year-old Vladislav V. Drozdek of Beaverton. He's being held in the Washington County jail and faces a first-degree theft charge. Police said further arrests and charges are possible.
(https://bit.ly/39dPMn6)

FAKE NEWS.... OR FLORIDA?!
I read a headline and Heidi (and you) need to guess if the story is FAKE NEWS or something that really happened in the state of FLORIDA.
A Dade County man was busted for drunk flying a helicopter after he landed in a strip club parking lot ….. FAKE NEWS
GOOD NEWS: Brought to you by BetterCreditCards.com

Man Hands Out $10,000 In Cash To People Waiting In Unemployment Line
https://www.sunnyskyz.com/good-news/3715/Man-Hands-Out-10-000-In-Cash-To-People-Waiting-In-Unemployment-Line