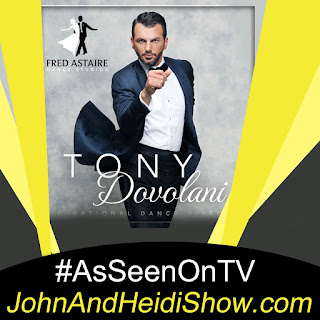 Today we visit with Tony Dovolani of DANCING WITH THE STARS and the MILLION MASK MOVEMENT. Lyndean Brick, President and CEO of Advis, Inc. and Tony Dovolani, former Dancing with the Stars dance professional and Fred Astaire Dance Studios International Dance Director, are working to put masks in the hands of healthcare workers through the "Million Masks MOVEment."
https://www.fredastaire.com/million-mask-movement-gofundme-drive/

NerdBear.com has conducted research into the most popular hobbies and pastimes during the Coronavirus outbreak.

THIS IS YOUR BRAIN ON DRUGS: Brought to you by TimeForRehab.com!
Each day we share stories about people doing dumb things under the influence, but ADDICTION IS NO LAUGHING MATTER! If you or someone you know needs help, we're here! Learn more at TimeForRehab.com.
A woman in Pennsylvania is facing charges and being tested for coronavirus after state police say she coughed in a trooper’s face and told him she had the virus while he was arresting her for public drunkenness. Police say 37-year-old Jessica Harvey will be prosecuted to fullest extent.

Disney+ is bringing Doogie Howser, M.D. to a new generation with a reboot of the comedy, set to focus on a half-Asian, half-white 16-year-old girl who works as a doctor in Hawaii.

While every other movie originally due out in the next two months has pushed or delayed its release date, there was one holding fast: My Spy. Even with all movie theaters across the globe shut down for the time being, the Dave Bautista comedy was still set for an April 17 release date. But now the inevitable has happened: My Spy is not opening on April 17. In fact, it’s not opening in theaters at all. Instead, the movie is headed straight to Amazon.

Another poll reveals how people were dealing with the quarantine and… we’re eating constantly and washing it down with alcohol to deal with the stress. 28 percent of adults said they were eating more due to the self-quarantine, compared to just 11 percent who said less.

Texas police have arrested a teen who made numerous claims on her Snapchat that she planned to intentionally spread the coronavirus. The Carrollton Texas Police Department identified the teen as 18-year-old Lorraine Maradiaga and arrested her late Tuesday morning. One of Maradiaga’s Snapchat videos is said to have been taken at a local COVID-19 testing site. In one clip on her Snapchat she said she was “here at Walmart about to infest” everyone, “because if I’m going down, all you” are going down.

A New Jersey (New Brunswick) man is facing burglary and weapons charges after he allegedly broke into a home, while naked and armed. After Terrance Edwards left that home, police allege he attempted to break into a nearby residence but was not successful. Police say he told them he had the coronavirus.

A 101-year-old British man was infected with coronavirus and beat it.

American consumers have been stocking up on staples as the coronavirus pandemic spreads, giving one struggling beverage a much-needed boost: orange juice. US retail sales of orange juice jumped about 38% in the four weeks ending on March 28 compared to the same period last year.

A newlywed couple in South Africa managed to get married and jailed on the same day after police stormed their wedding for flouting the coronavirus lockdown rules. The unnamed couple had just said their 'I dos' when armed police stormed the ceremony which was taking place in front of 53 guests

Your liver can regrow itself in three weeks. The Greeks had it right with Prometheus, it turns out. According to Greek mythology, the titan was punished by having an eagle eat his liver day after day. The liver would regrow at night, leaving Prometheus at the bird's mercy. It turns out, the regenerative properties of this story are partially true: Doctors have found that the liver can regrow in three weeks, not one day.

Dateline.... ENGLAND
The Duke and Duchess of Cambridge wowed schoolkids during a surprise virtual visit last Wednesday. Prince William and wife Kate dropped in on a show-and-tell session by youngsters whose parents are out on the front line of the nation’s coronavirus battle.

Florida police are investigating how a man infiltrated an online Zoom class and exposed himself to a class of eighth grade students. According to investigators, the suspect entered a class for pupils at Wolf Lake Middle School in Apopka, an Orlando suburb. The school moved its classes online in response to the Coronavirus pandemic. In a message to teachers, a school administrator noted that “an individual gained unauthorized access and exposed himself to the class” during a Zoom instructional session. School officials reported the incident to the Apopka Police Department, which has opened an investigation. The school administrator said that not every video conferencing application has been “vetted” and, as such, may not meet district standards. To better control access to virtual classrooms, teachers have been instructed to consider using Zoom’s “waiting room” feature, which allows online hosts to control whether a participant enters an online session. (https://bit.ly/2UIYllV)

After being told of a limit on the number of Lysol cans she could purchase, a Walmart customer sprayed a worker in the eyes with the disinfectant, according to Massachusetts police who are seeking the public’s help in identifying the alleged assailant. The March 27th attack occurred at a Walmart Supercenter in Leicester, a town outside Worcester. In a bid to collar the woman, police recently released a photo of her. She appears to have departed Walmart in an Uber after she was somehow able to complete her purchase. The Walmart employee was treated by EMS workers summoned to the store following the Lysol attack.
(https://bit.ly/34hMJcZ)

FAKE NEWS.... OR FLORIDA?!
I read a headline, you guess if the story is something that really happened in the great state of FLORIDA or is it #FakeNews made up to trick you and amuse me
A group of naked women told Florida Police they were “air drying” at a rest stop FLORIDA (https://bit.ly/2vdym8Z)
GOOD NEWS: Brought to you by #GiftCardChallenge GiftCardChallenge.org

People Are Praising Mail Carriers And Buying Stamps To Support The US Postal Service
https://www.sunnyskyz.com/good-news/3737/People-Are-Praising-Mail-Carriers-And-Buying-Stamps-To-Support-The-US-Postal-Service