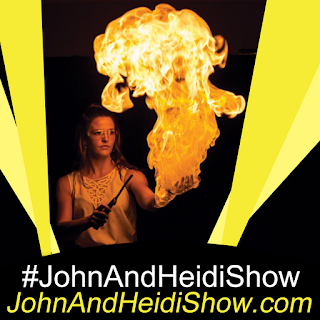 Today we talk with science and chemistry with Dr. Kate Biberdorf: the scientist, science entertainer, and professor at the University of Texas, known widely as Kate the Chemist. She wants to empower kids everywhere—especially young girls—to follow their dreams, to pursue what they love, and to get excited about science! Buzzfeed says, “[Kate]'s an awesome example to little kids that anyone can be a scientist!” Whether it’s catching a dry ice bubble for the first time, discovering there is a safe way to breathe fire, or thinking critically and creatively when faced with everyday problems, the two new books are sure to make science fun, accessible, and show that there is a practical use for science that will appeal to all types of readers. She has TWO new books out this month. KATE THE CHEMIST: THE BIG BOOK OF EXPERIMENTS, (https://amzn.to/2yzo4ES) a non-fiction title with 25 experiments kids can do at home, and a middle grade novel called KATE THE CHEMIST: DRAGONS VS. UNICORNS. (https://amzn.to/3cC4BlK)

Mother’s Day... will you get your mom or wife a gift even if she says, “Don’t get me anything?” What about her birthday, or Valentine’s Day? A survey finds that even if a wife or girlfriend says, “Don’t get me anything,” 88 percent of men will ignore her wishes and get her something. Good idea, since women in the survey said even if the say they don’t want anything, 63 percent still expect a small gift.

THIS IS YOUR BRAIN ON DRUGS: Brought to you by TimeForRehab.com!
Each day we share stories about people doing dumb things under the influence, but ADDICTION IS NO LAUGHING MATTER! If you or someone you know needs help, we're here! Learn more at TimeForRehab.com.
There are places where it may be appropriate to strip down to your undies and start dancing. The middle of a street just west of U.S. 1 is not one of them. But that’s where Indian River County, Florida sheriff’s investigators went shortly after 6:00 p.m. on March 26th. Investigators arrived at a specific address after a report of an “intoxicated subject.” They were told of a woman who “appeared to be under the influence of an unknown drug, as she actively took her clothes off on the roadway.” The woman, later identified as a 25-year-old Vero Beach resident, arrived in a red pickup. “After the female stripped herself down to her underclothes, she began swinging a golf club and dancing in the middle of the roadway,” the affidavit states. She was jailed on a disorderly intoxication charge. (https://bit.ly/2UWLvAZ)

Disney is being mocked after censoring Daryl Hannah’s butt in the movie “Splash” on its Disney Plus streaming service.(https://dcdr.me/2VsSOPB)

A new report revealed that Joe Exotic has a secret ex-wife and a 38-year-old son who is seen on camera during “Tiger King.” (https://bit.ly/2RT1Lkz)

Vicki Gunvalson is postponing her wedding to Steve Lodge due to the Coronavirus. She was on “The REAL HOUSEWIVES of Orange County.”
(https://pge.sx/34dlnon)

Paris Hilton posted a “Simple Life” meme in which she says “Quarantine is not hot.” (http://dailym.ai/2VkN4rp)

Matt Belloni, the Top Editor at the Hollywood Reporter, has stepped down over differences in editorial control of the magazine. (https://bit.ly/2yG2nmB)

Daniel Tabussi is facing simple assault by physical menace, disorderly conduct, and other related charges after the incident.

Lindsay Lohan says her new album is a “remembrance of things” from her early 20’s. (https://pge.sx/3emq045)

Miley Cyrus and her boyfriend, Cody Simpson, delivered tacos to healthcare workers at a California hospital on Saturday. (https://pge.sx/2Rda5uW)

Louis CK released his new standup special on his website this weekend.
(https://bit.ly/34eZ55n)

Dogs like squeaky toys for a dark reason. Ever wonder why your little puppy obsesses over those squeaky toys? Because dogs are descendants of wolves whose instincts include hunting smaller animals. The sound a squeaky toy makes is very similar to the sound a small animal makes when being hunted. When Ol' Lassie hears that, she gets excited because of these killer survival skills.

A Florida Woman is facing a felony domestic battery charge after allegedly clobbering a man with a can of SpaghettiOs, a blow that left the victim with a large laceration on his head. According to an arrest affidavit, the victim told police that after arriving “home from the hospital” Saturday afternoon he got into a verbal argument with 30-year-old Shadae Miranda. The victim and Miranda were sharing a room at a Travel Inn motel in Fort Pierce. The man told cops that he sought to deescalate the situation by gathering some of his belongings and stepping outside the room, where he ended up sitting in a lawn chair. Miranda, cops allege, began striking the victim while he was still inside the room. As the man lounged outside, Miranda allegedly struck him in the head with a “15.6 ounce metal can of Spaghettio’s that was in a plastic bag.” While speaking with the victim, an officer “observed a large laceration on the top of his head consistent with being struck with the can.” She was arrested for aggravated battery, a felony. (https://bit.ly/2RgJ4qj)

A Florida man working at a hospital as a physician assistant is accused of doing something unthinkable during the COVID-19 pandemic. The Palm Beach County Sheriff's Office says 46-year-old Rhoderick Manhattan stole emergency equipment from a hospital. Manhattan is accused of loading 54 boot covers, 26 protective over-all suits, 12 scrub jackets, 11 headcover hoods, a box of gloves, and a pair of scrubs into a silver Jaguar. Two hospital workers told investigators they saw him do it. The total cost of everything he was trying to take is about $500. The sheriff's office said the theft of medical equipment over $300 a second-degree felony-- but since the county is in a state of emergency, that makes it a first-degree felony. Manhattan was booked into the Palm Beach County Jail on larceny of emergency equipment and grand theft of equipment during a state of emergency. (https://bit.ly/2JIpFuj)

FAKE NEWS.... OR FLORIDA?!
I read a headline, you guess if the story is something that really happened in the great state of FLORIDA or is it #FakeNews made up to trick you and amuse me
A Fort Meyers man who was busted for bringing an alligator into a Piggly Wiggly Supermarket claimed it was his therapy animal ….. FAKE NEWS
GOOD NEWS: Brought to you by #GiftCardChallenge GiftCardChallenge.org

Taxi Driver Is Greeted With A Round Of Applause At Hospital
https://www.sunnyskyz.com/good-news/3750/Taxi-Driver-Is-Greeted-With-A-Round-Of-Applause-At-Hospital
Newer Post Older Post Home