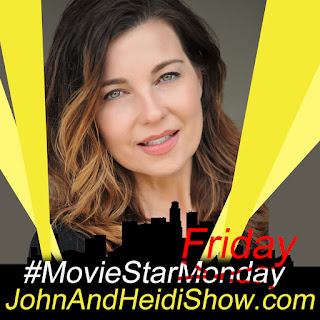 Today we visit with actress Shari Rigby about her new book, Consider the Lilies: Get Rooted In Your Destiny By Discovering God’s Plan. https://amzn.to/35lOlTq

Faith and family leading actress, Shari Rigby is on a mission to encourage women to find purpose in Jesus Christ alone. You most recently watched Shari in the hit faith film, OVERCOMER, where she played alongside Priscilla Shirer and Alex Kendrick.

A study by Florida Atlantic University found that fun children are more popular on playgrounds than less outgoing children. (https://bit.ly/2Sarogz)

Police in Spain arrested a burglary suspect accused of breaking into a bar. He was easy to catch because he got drunk and fell asleep on a couch in the bar.

ESPN’s ratings for the Michael Jordan Documentary were much higher than expected.(https://bit.ly/2wXXPYr)

A study says most yogurt is not as healthy as most of us think.

Three of the candidates vying to win the Democratic nomination for Utah governor have announced their picks for running mates. One of them, Nikki Ray Pino, announced an eyebrow-raising candidate in a YouTube video: his father, Nikki Ray Pino Sr.

Music streaming service Spotify pin-pointed the average age of midlife crises as 42. Staff analyzed data and found that users around 42 drop their usual playlists — which usually contain hits from their youth — in favor of today’s hits.

A New York City Tailor is opening for business in defiance of the state’s lockdown orders. (https://bit.ly/2YhmYZr)

Billy Joel is being sued by a Long Island architect who claims “The Piano Man” gave his custom renovation plans to another home builder who completed the job. (https://pge.sx/35cGSG5)

A Texas Mayor was forced to apologize after she broke her own lockdown order and got a nail salon to open just for her. (https://bit.ly/357SYQR)

The National Debt is closing in on $25 trillion dollars. (https://bit.ly/2yHXKby)

Bill Gates has donated nearly half his fortune. Microsoft founder Bill Gates encourages the Giving Pledge, a notion that, if you are fortunate enough, you should be giving 50 percent of your wealth to those who need it most. As of 2013, he has donated $28 billion and has saved around 6 million lives by bringing vaccines and better healthcare to people worldwide.

In the UK a blind man was busted after police spotted his car on the wrong side of the road. He was being guided by someone who was in the passenger seat that had lost their license.

According to a court filing, an ex-con arrested for allegedly hitting and choking his girlfriend told Florida cops that he was not actually attacking the woman, but rather demonstrating “how I was previously arrested for domestic battery.” Police charge that William Shumaker, a 36-year-old convicted felon, “repeatedly choked his girlfriend of two years around her throat with both hands.” The alleged attack took place Sunday afternoon in the parking lot of a St. Petersburg convenience store. When officers approached Shumaker, he reportedly “spontaneously stated ‘I was showing her how I was previously arrested for domestic battery.’” The purported demonstration, cops noted, left the woman with “multiple red marks on her left neck consistent with hand prints.” Shumaker was charged Sunday with domestic battery by strangulation, a felony for which he is locked up in lieu of $50,000 bond. A judge has ordered him to have no contact with the victim. (https://bit.ly/2VsF5cJ)

A South Euclid, Ohio man was apparently getting his swerve on with his mistress when his girlfriend started knocking on the front of his home. He came up with a not-so-obvious plan to get rid of the girlfriend without her finding out about the mistress - call the police. So, that’s what he did. According to Cleveland.com, “A man, 28, reported April 4th that someone was attempting to break into his home. Officers arrived to find a woman, who explained she was the man’s girlfriend.” The police then learned that this playboy had another woman hiding in his closet and was hoping the officers would do him a solid and remove girlfriend from the area so she wouldn't find out that he's a big fat cheater. Well, that didn't happen. What did happen was the playa was charged with making false alarms. There's no word on if the girlfriend has kicked him to the curb. (https://bit.ly/2RWUKiC)