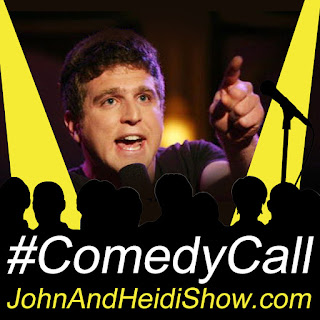 Today we visit with comedian Mo Mandel for #ComedyCall about his new program ‘Small Town Throwdown’, which premiered this week on Discovery Channel. Learn more about #SmallTownThrowdown at discovery.com or at www.Facebook.com/discovery

A survey by the University of Florence found that 81% of couples do not intend to conceive a baby during the Coronavirus lockdowns. (https://bit.ly/3fHkI3K)

THIS IS YOUR BRAIN ON DRUGS: Brought to you by TimeForRehab.com!
Each day we share stories about people doing dumb things under the influence, but ADDICTION IS NO LAUGHING MATTER! If you or someone you know needs help, we're here! Learn more at TimeForRehab.com.
A Florida woman was busted after repeatedly trying to kiss strangers at a bar and also calling 9-1-1 five times to complain patrons were not remaining socially distant inside the establishment. 32-year-old Audra Adams wound up getting arrested for trespassing after she refused to leave Monkey Bar and Grille in Indialantic. Cops showed up after Adams’ fourth 9-1-1 call. Before then, customers at the bar complained to the owner that she tried to kiss several people. At the owner’s request, she reluctantly left the bar, which is serving booze and food under phase one of Florida’s reopening plan. But she refused to leave the parking lot. She was charged with trespassing after warning, disorderly conduct, resisting an officer without violence, and misuse of a 9-1-1 system. (https://bit.ly/3gaSq23)

Acting couple Rooney Mara and Joaquin Phoenix will be having their first child this summer. A source to Page Six detailed that Mara has been pregnant for up to six months. So far there has been no confirmation from either person or their representatives.


A New York City Attorney who represents Lady Gaga had his files hacked and they’re being held for a $21 million dollar ransom. (https://pge.sx/3bxgNDh)


Cindy Crawford’s daughter, Kaia Gerber, posted a bikini selfie with her arm in a blue cast after what she called “a little accident.”(https://pge.sx/3dRHvbo)


The summer’s hottest female fashion is the “under-boob bikini,” which reveals the bottom part of a woman’s breast. (https://bit.ly/2ZfcppX)


Adele has reportedly become good friends with Prince Harry and Meghan Markle after the couple moved into her Beverly Hills neighborhood. (https://pge.sx/3bIW3c3)

FUN FACT FOR YOU:Share this with your friends... they'll think you're really smart!
Cats once delivered mail in Belgium. In the 1870s, the city of Liège, Belgium, attempted to employ 37 felines as mail carriers, according to the BBC. Messages were tucked into waterproof bags that the kitties would carry around their necks. However, while one cat apparently made it to its destination in under five hours, the other felines took up to a day to complete their journeys. Due to the fact that the cats weren't particularly reliable and definitely weren't speedy, the service didn't last very long.

Dateline.... ENGLAND
Shakespeare’s Globe Theater in London may be closed after it was bankrupted by Coronavirus lockdowns. (https://bit.ly/2XaCyns)

A Maryland bar unveiled an innovative solution to help patrons remain socially distant when it fully reopens — inner tubes on wheels. Fish Tales in Ocean City rolled out new “social distancing tables” on Saturday, recording their maiden voyages on Facebook Live. “Only at Fish Tales can you find these special tables for social distancing,” a woman recording the video said. “They are six feet apart. You can drink safely,” she said as a number of employees tested out the contraptions, wheeling them from the back of a truck onto the bar’s property. The tables will be available to customers “whenever we are allowed to serve,” the woman recording the video said. Fish Tales, like many bars in the state, is open for takeout service. On-site services at restaurants and bars in Maryland remain prohibited. (https://bit.ly/2LJGfei)

MOMENT OF DUH: Brought to you by InsuranceChicken.com
Brandon police are on the hunt for a Manitoba man who became angry and smashed up a gas pump after learning he had to pre-pay before fueling. The incident happened in Brandon, Manitoba, and was captured by surveillance cameras in the gas station. In the footage, you can see an older gentleman start kicking and hitting the gas pump while the nozzle is in his car. Eventually, he takes the nozzle out of the neck of his car’s tank, since he notices the gas hasn’t been flowing. The man proceeds to smash up the gas pump using the nozzle, then throws it up in the air before getting back into his vehicle to drive off. “He wasn’t pleased about being asked to pre-pay for his fuel and unfortunately decided to take it out on the gas pump,” said Brandon Police spokesperson Constable Myran Hamm. The man faces mischief charges for damaging the pump. Authorities are asking anybody that recognizes the man to come forward with information. (https://bit.ly/2X9nere)

FAKE NEWS.... OR FLORIDA?!
I read a headline, you guess if the story is something that really happened in the great state of FLORIDA or is it #FakeNews made up to trick you and amuse me
The city of Lake Fort Worth accidentally sent out a Zombie Alert on its Facebook page ….. FLORIDA (https://bit.ly/2yCNAtu)