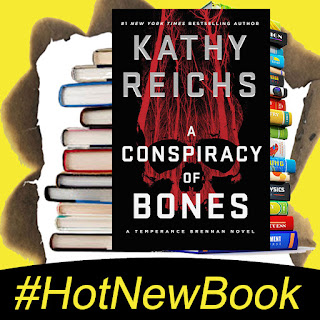 Today we visit with #1 New York Times bestselling author Kathy Reichs, as she returns with a new riveting novel featuring her vastly popular character forensic anthropologist Temperance Brennan, who must use all her tradecraft to discover the identity of a faceless corpse, its connection to a decade-old missing child case, and why the dead man had her cell phone number.
A Conspiracy of Bones - https://amzn.to/36Dl33u

TODAY IS A SPECIAL DAY! (A special thanks to NationalDayCalendar.com)
May 29th
National Paperclip Day
National Coq Au Vin Day

SURVEYS, STUDIES & SUCH: Brought to you by BetterCreditCards.com
A variety survey found that, due to the Coronavirus, 70% of Americans would rather watch new movies at home than go to the theater. (https://bit.ly/2A0TlkF)

THIS IS YOUR BRAIN ON DRUGS: Brought to you by TimeForRehab.com!
Each day we share stories about people doing dumb things under the influence, but ADDICTION IS NO LAUGHING MATTER! If you or someone you know needs help, we're here! Learn more at TimeForRehab.com.
Yankees star Aaron Judge’s girlfriend Samantha Bracksieck was busted on “extreme DUI” charges in Arizona. 26-year-old Bracksieck was stopped around 11:50 p.m. on February 25th in Scottsdale after cops allegedly caught her driving a white 2017 Honda HR-V without the headlights on while going up to ten miles above the speed limit. When cops questioned her about the headlights, she said she hadn’t realized they were off. “I could smell a strong odor of an intoxicating beverage coming from inside the vehicle and from her breath as she spoke,” cops wrote in the report, adding that Bracksieck was slurring her words and had bloodshot eyes. Court records show Bracksieck was charged with “extreme DUI” for an alleged blood alcohol concentration level between .15 and .19, as well as a headlight violation and changing lanes in an unsafe manner. Bracksieck pleaded not guilty and her case is still pending. If convicted, she faces potential jail time and fines. (https://bit.ly/2WOS3lU)

Some new info reveals Netflix helped its users avoid watching nine full days worth of commercials in 2019. The analysis was compiled by Reviews.com and found that the streaming service for television shows and movies, which does not show commercials, helped save the average viewer about 36 minutes worth of ads daily compare to strictly television watchers, which equates to 219 hours of ads each year or roughly 9.1 days.

An NFL Player has filed an anonymous lawsuit against United Airlines claiming that an “intoxicated woman” fondled his man parts while he slept during a cross country flight. (https://bit.ly/2TpVQUC)

What are people searching during the pandemic? The top search term right now is “self-care.”

Leland’s Auction House is selling a pair of sneakers that Michael Jordan wore on the 1992 Olympic Dream Team for $25,000. (https://pge.sx/3cSuk9T)

A new study examining people’s cleaning frequencies and their personality traits revealed Americans who are “super clean” are twice as happy with their overall lives than those who believe themselves to be “messy.” The study surveyed 2,000 Americans and divided them into three self-identifying groups: super clean, moderately clean, and messy. The super cleans were found to be more content in family matters, have a better sex life, get better sleep, have more career satisfaction, and felt less stressed.

There's a textbook written entirely by an AI author. Publishers are always eager to release something unique—and Springer Nature did just that when they published a textbook by an author named Beta Writer in 2019. No, that's not a cheeky pseudonym; it's the name of a machine-learning algorithm designed by researchers from Goethe University in Frankfurt, Germany. The book is called Lithium-Ion Batteries: A Machine-Generated Summary of Current Research. And while it doesn't sound like the most interesting material, it is "the first machine-generated research book," according to the academic publishing company.

Dateline.... FRANCEA Tech Entrepreneur is urging the French Government to sell the Mona Lisa to cover the country’s losses. The Mona Lisa is reportedly worth $50 billion dollars.
(https://bit.ly/3d1kXFj)

A nurse on an all-male coronavirus ward in Russia has been disciplined for only wearing lingerie beneath her transparent protective gown. Her revealing picture went viral after being taken by a patient at a hospital in Tula, 100 miles south of Moscow, who said there were 'no complaints' from his bedfellows. But hospital chiefs were not amused and punished the nurse for “non-compliance with the requirements for medical clothing.” The unnamed medic in her 20s said she was “too hot” wearing her nurses' uniform under the gown. She told her managers at Tula Regional Clinical Hospital that she did not realize the PPE she wore when treating coronavirus patients was so transparent. Despite this, the regional health ministry reported that “a disciplinary sanction was applied to the nurse of the infectious diseases department who violated uniform requirements.”
https://www.dailymail.co.uk/news/article-8339101/Nurse-disciplined-wearing-lingerie-PPE-gown-Russia.html

Southwestern Indiana police say a man allegedly attacked a neighbor with a Weed Wacker, leaving him with cuts on his back, as the two men feuded over grass clippings left along a roadway. 48-year-old Gail Kammerer was arrested Thursday on a preliminary charge of battery with a deadly weapon. The Evansville man remained jailed without bond Friday ahead of a probable cause hearing. The Evansville Courier & Press reports that Kammerer told deputies he attacked his neighbor after the man blew grass clippings onto him while using a riding lawn mower to clear a roadway of clippings Kammerer had produced while clearing a ditch. (https://bit.ly/3bQcbse)


FAKE NEWS.... OR FLORIDA?!
I read a headline, you guess if the story is something that really happened in the great state of FLORIDA or is it #FakeNews made up to trick you and amuse me

A self-proclaimed COVID-19 skeptic in Jupiter, Florida has a new outlook after contracting the virus. FLORIDA - https://www.nbcboston.com/news/coronavirus/this-was-a-real-virus-coronavirus-skeptic-says/2127744/

A man in Jupiter, Florida, who admits he was skeptical that the coronavirus was a real threat, has a new outlook after contracting the virus. Around this time last month, rideshare driver Brian Hitchens was a self-proclaimed COVID-19 skeptic. He says he thought "maybe the government trying something, and it was kind of like they threw it out there to kinda distract us." He made Facebook posts downplaying the seriousness. Fast forward to this week and Hitchens has a whole new outlook from his hospital bed. It hits even closer to home for Hitchens after his wife was admitted to the same hospital at the same time for coronavirus. She's been on a ventilator for three weeks.
GOOD NEWS: Brought to you by #GiftCardChallenge GiftCardChallenge.org