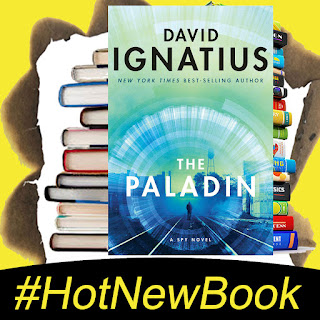 Today we visit with Washington Post columnist and best-selling author David Ignatius about his latest CIA thriller, THE PALADIN, which delivers an urgent warning about the dangers of “deep fakes”—the false narratives that intelligence operatives can now spin with alarming precision and aim at industries, individuals, and even entire governments in order to inflict lethal damage. In the competition to manipulate reality, the line between good actors and bad is increasingly blurred, and no one is immune to the reputational fallout. https://amzn.to/2ZPsHq0

SURVEYS, STUDIES & SUCH: Brought to you by BetterCreditCards.com
A new survey found that Millennials prefer Robot Bankers over Human Bankers. (https://bit.ly/2X1NdSE)

THIS IS YOUR BRAIN ON DRUGS: Brought to you by TimeForRehab.com!
Each day we share stories about people doing dumb things under the influence, but ADDICTION IS NO LAUGHING MATTER! If you or someone you know needs help, we're here! Learn more at TimeForRehab.com.
They put the “bar” in salad bar! A Missouri supermarket is selling miniature liquor bottles instead of veggies at a serve-yourself salad station during the Coronavirus crisis, according to a viral tweet. “My grocery store has replaced the salad in the salad bar with…. liquor,” shopper Emily A. posted on Twitter, along with a photo of the boozy bar she says was found at a Dierbergs market. The image — which shows piles of 99-cent hard liquor bottles on one side of the station, along with beer on the other — drew cheers from pandemic-weary boozehounds on social media. “Best. Salad. Bar. EVAH,” one person wrote on Twitter. (https://bit.ly/2ZlXnPn)

BIG SCREEN-LITTLE SCREEN: Brought to you by ChannelSurferTV.com
CAA, the top agency in Hollywood, has signed a “virtual celebrity” named Miguela to an acting deal. The virtual actress is a digital creation who doesn’t eat food. (https://bit.ly/2ZCasEm)

Tiger Woods and Peyton Manning won “The Match” against Tom Brady and Phil Mickelson on Sunday, raising $20 million for charity. Brady made the biggest headline of the day when he split his pants after hitting a shot. (https://es.pn/2ZA3gZu)

The New York Stock Exchange is reopening its famed trading floor this week with a new set of social distancing guidelines in place. (https://on.wsj.com/36ree4X)

A new lawsuit accuses the bankrupt marijuana company “Medmen” of wasting investor money on excessive security for their executives. (https://politi.co/2LYyOjO)

A photo of Bigfoot doing Yoga at a California Nursing Home has gone viral.
(for the record... it's a person in a costume) (https://bit.ly/3c3jMn8)

A video of massive crowds partying at poolside bars on the Lake of the Ozarks in Missouri over the Memorial Day Weekend has gone viral. (https://bit.ly/3deeWVT)

Lady Gaga says she “flirted with the idea of sobriety” while recording her new album. (https://pge.sx/3d1cguB)

Country Singer Morgan Wallen was arrested for public intoxication and disorderly conduct after he was kicked out of Kid Rock’s bar in Downtown Nashville. (https://pge.sx/3c3xGG1)

Dateline.... RUSSIARussian Officials are still trying to determine how three Doctors fell out of the same hospital window after they criticized the government. (https://on.wsj.com/2A7yqg9)

A heartbroken woman in China took revenge on her ex-boyfriend by dumping a ton of onions at his doorstep, apparently in a bid to make him cry as much as she did. According to the Daily Mail, the woman - identified only by her surname Zhao - was devastated after her boyfriend broke up with her. They had been together for over a year but the man reportedly cheated on her. Furious at this, Ms. Zhao decided to get 1,000 kgs, equivalent to 2,200 pounds, of onions delivered to his doorstep. She also sent instructions that the veggies were to be dumped on the offending ex's doorstep without contacting him. Photos and videos that have gone massively viral on Chinese social media platforms like Weibo show sacks of red onions being delivered to the ex's home in Zibo, eastern China. Along with the onions, Ms. Zhao also sent a note that read: “I've cried for three days, now it's your turn.” (https://bit.ly/2LMkSJp)
MOMENT OF DUH: Brought to you by InsuranceChicken.com

A Florida sheriff’s office employee reportedly hid a camera in his roommate’s bedroom to spy on her. Llewellyn Berkheiser III, a 28-year-old communication specialist for the Orange County Sheriff’s Office, was busted Saturday after his roommate found a GoPro camera in a vent in her bedroom. Berkheiser’s roommate, who was not identified, told deputies she discovered the recording device Friday when she noticed she couldn’t see light in the vent from an adjoining kitchen that was usually visible. Berkheiser told the woman a maintenance man from their apartment complex possibly put the camera there, but the woman checked with building records and found that no employees had been in the apartment since March. He later admitted to putting the camera in the vent. Investigators also seized his camera, cellphone, and laptop. He was charged with one count of video voyeurism and has been relieved of his duties as internal and criminal investigations are underway. (https://bit.ly/2zvIgIx)
FAKE NEWS.... OR FLORIDA?!
I read a headline, you guess if the story is something that really happened in the great state of FLORIDA or is it #FakeNews made up to trick you and amuse me
A Longwood man was arrested for playing basketball naked in a public park and told police he thought it would enhance his skill level ….. FLORIDA (https://bit.ly/2WHVETB)
GOOD NEWS: Brought to you by #GiftCardChallenge GiftCardChallenge.org

Man Whose Dad Walked Out On Him As A Child Makes 'How To' Videos For People Without Dads
https://www.sunnyskyz.com/good-news/3800/Man-Whose-Dad-Walked-Out-On-Him-As-A-Child-Makes-039-How-To-039-Videos-For-People-Without-Dads
Newer Post Older Post Home