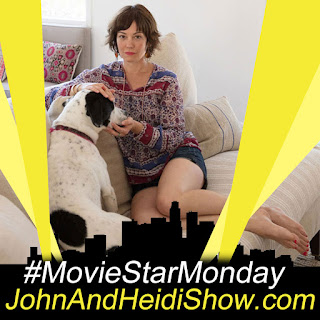 This #MovieStarMonday we visit Natalie Wood’s daughter, actress Natasha Gregson Wagner. She has also been in many movies. Lost Highway (1997), Buffy the Vampire Slayer (1992), Urban Legend (1998),High Fidelity (2000) and many more. We will talk about HBO's documentary “Natalie Wood: What Remains Behind” which premieres on May 5th. The film explores the Hollywood icon's life through the eyes of her daughter Natasha Gregson Wagner.

A new survey found that 1 in 8 relationships are, quote, “ON THE ROCKS,” because of the Coronavirus. (https://bit.ly/3cKAMzg)

THIS IS YOUR BRAIN ON DRUGS: Brought to you by TimeForRehab.com!
Each day we share stories about people doing dumb things under the influence, but ADDICTION IS NO LAUGHING MATTER! If you or someone you know needs help, we're here! Learn more at TimeForRehab.com.
Female Author Diane Shah claims that Yankees Legend Mickey Mantle drunkenly hit on her when she was a reporter for the team in the 1970’s.
(https://pge.sx/3cECyCf)

Cameron Diaz says she’s now open to returning to her acting career after walking away in 2014. (http://dailym.ai/2Y8NEv5)

Kristen Bell shared a video of Dax Shepard operating on himself to avoid a trip to the Doctor’s Office. (https://pge.sx/2KCwqya)

A growing number of U.S. colleges are suffering huge financial losses while students remain off campus. They’re saying USC is down $10 million this month alone. (https://n.pr/2XXtDYz)

An Idaho woman was arrested for violating the stay at home order after she held a yard sale. (https://bit.ly/2xQWN0y)

New research shows that people have been mass purchasing plants during the Coronavirus lockdown. (https://bit.ly/2VrPndt)

New Zealand was mocked last year when they elected a Millennial Prime Minister, 39-year-old Jacinda Ardern. But they currently have the lowest rate of Corona infections of any developed country in the world, with just five cases as of last Tuesday. (https://bit.ly/2VpkOoD)

The World Series of Poker has been postponed until the fall because of the Coronavirus. (https://es.pn/3cENkbo)

New York 1 Anchor Pat Kiernan is offering to officiate Zoom Weddings for couples who can’t get married in public. (https://pge.sx/2wX8mDb)

Bella Hadid revealed that she cut her own bangs during quarantine.(https://pge.sx/2Kq8IW1)

The Wilhelmina Modeling Agency was caught taking $2 million in loans that were meant to help small businesses survive. (https://bit.ly/3eHSJAv)

A restaurant in New York employs grandmas as chefs. It is true that everybody thinks their Italian grandma—or nonna—is best cook around. So it was a genius idea when Joe Scaravella decided to gather up as many nonnas as he could to work in his restaurant in Staten Island. Enoteca Maria combines the skill of these delightful, talented grandmothers and has them create and cook recipes from their own family cookbooks.

Florida deputies have a message for its citizens: “Placing a fake 'COVID-19' sign on your door will not stop us from kicking it in when you have felony warrants for your arrest.” That's exactly what 28-year-old Joshua Price attempted to do to avoid arrest for felony flee and elude and violation of probation warrants. The sign reads, “COVID 19 infected since 4/8/20.” Deputies say they properly researched to ensure Price was lying about his condition. They showed up with proper PPE just in case. Price was booked into the jail and showed no indication of having the Coronavirus. (https://bit.ly/2RYUMqi)

A Minnesota man was arrested in Elkhart County after officials say he led Indiana State Police on a high-speed pursuit because he thought they “wanted to race.” According to the press release, 25-year-old Musab Alshussein was clocked by troopers going 120 miles an hour in a 70 mile an hour zone. The red Mustang was chased for 25 miles, with troopers throwing stop sticks twice before the pursuit ended. Police say Alshussein told troopers he didn’t stop because he thought the officers wanted to race. He was taken to the Elkhart County Jail and now faces preliminarily charges of resisting police, reckless driving, and several moving violations. (https://bit.ly/2KvtUdg)

FAKE NEWS.... OR FLORIDA?!
I read a headline, you guess if the story is something that really happened in the great state of FLORIDA or is it #FakeNews made up to trick you and amuse me
A woman was arrested after allegedly spitting into produce bins at a Walmart in Florida. As detailed in a charging affidavit, 40-year-old Lisette Santis is facing a felony charge of recklessly tampering with a product in connection with her actions Wednesday evening at a Walmart in Holly Hill, a city outside Daytona Beach. After Santis was booked into the county jail, U.S. Immigration and Customs Enforcement filed a detainer seeking the Guatemala native’s expulsion from the country. An ICE notice indicates that a “final order of removal against the alien” had previously been lodged against Santis. A Walmart employee told cops she was working in the store’s produce section Wednesday night when she spotted Santis opening a sealed package of guava, from which she placed pieces of fruit in her mouth. At one point, as Santis “spit the fruit out of her mouth, pieces of the fruit and spit got onto” a display of limes. She also allegedly left one of the guava pieces from her mouth in the lime bin. (https://bit.ly/3eQSjb1)
GOOD NEWS: Brought to you by #GiftCardChallenge GiftCardChallenge.org