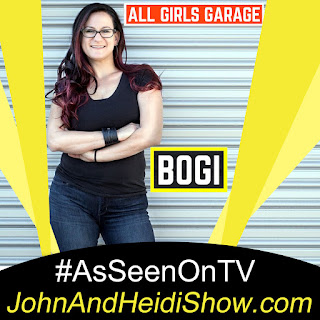 Today we visit with Bogi Lateiner, a host of All Girls Garage since the show first launched in 2012 on Velocity channel... find it now weekend mornings at 11:30am EST on the MotorTrendTV Network. Bogi is a fixture on the program and the longest standing original cast member, it's only one dimension of a multifaceted talent. She is also a career-long fierce advocate, combating a culture that has historically limited the opportunities of women within the automotive industry.

SURVEYS, STUDIES & SUCH: Brought to you by BetterCreditCards.com
A study by New York University found the Abbot’s Rapid Response Coronavirus Test is missing positive cases 48% of the time. (https://bit.ly/2Z2ejdt)

THIS IS YOUR BRAIN ON DRUGS: Brought to you by TimeForRehab.com!
Each day we share stories about people doing dumb things under the influence, but ADDICTION IS NO LAUGHING MATTER! If you or someone you know needs help, we're here! Learn more at TimeForRehab.com.
The Polk County, Florida Sheriff’s Office is trying to identify a man who was caught on surveillance video attacking another customer at a liquor store in Lakeland. The alleged attack happened at the Publix Liquor store around 12:30 p.m. Saturday. According to deputies, the attack stemmed from the suspect getting upset that the victim didn’t thank him for holding the door open. The victim, who is seen in video released by the sheriff’s office wearing a tan-colored hat, told deputies he walked into the liquor store while the suspect held the door open. The suspect, who is seen wearing a black and gray shirt and a black hat, then reportedly asked, “you don’t say ‘thank you’ to people who hold the door open for you?” The victim said he responded, saying “thank you.” After jawing back and forth, the suspect quickly approached the victim and started attacking. The surveillance video shows the suspect repeatedly hit the victim, knocking the man’s hat off. Anyone who recognizes the suspect is asked to call Detective Ervin with the sheriff’s office. (https://bit.ly/2yWm6Pw)

BIG SCREEN-LITTLE SCREEN: Brought to you by ChannelSurferTV.com
A technical glitch caused the CBS Evening News to go off the air during a live broadcast on the East Coast. (https://pge.sx/3cOv7cd)

A video of a Domino’s Delivery Driver exploding on a customer who didn’t tip him has gone viral. (https://bit.ly/2ykxMvd)

Chuck E. Cheese appears to be selling pizza under a different name on GrubHub. (https://fxn.ws/2ToTKo4)

A video of a New Zealand woman who taught her dog how to perform CPR has gone viral.(https://bit.ly/3dY7RZg)

A mermaid "documentary" once fooled so many people that the U.S. government had to issue a statement. In 2013, Animal Planet aired Mermaids: The New Evidence, a documentary—or rather, a mockumentary—that "proved" the half-human-half-fish beings exist. And while the program was fake, plenty of the 3.6 million viewers that watched believed that the fictional claims were real. In fact, so many people were fooled that the U.S. government's National Oceanic and Atmospheric Administration released a statement on its website addressing the confusion, saying: "Mermaids: The New Evidence is just entertainment. No evidence of aquatic humanoids has ever been found."

Dateline.... MALAYSIA
A Malaysian Drug Dealer became the first person to be sentenced to death via a Zoom Call last week. (https://bit.ly/3dWhWGe)

A Taco Bell customer tossed a bottle filled with human waste through the restaurant’s drive-thru window, according to Georgia police who are seeking the public’s help in identifying the female suspect. Investigators report that the woman was involved in a late-night dispute with workers last Thursday at a Taco Bell in Augusta. During the 11:30 p.m. confrontation, the woman initially leaned out the rear passenger window of a silver sedan and tried to douse a worker with liquid she squeezed from a plastic bottle. The bottle, cops say, was filled with urine and feces. The suspect then threw the bottle into the Taco Bell via the drive-thru window, prompting the eatery’s closure for two hours so that employees could sanitize the premises. The suspect is described as between 18 and 25 years old, “last seen wearing glasses and a white tank top.” (https://bit.ly/2LABO5u)
MOMENT OF DUH: Brought to you by InsuranceChicken.com

On second thought, it may have been a bad idea to post those surfing selfies. A Bronx man on vacation in Hawaii was arrested by agents with the state attorney general’s office Friday morning — and charged with violating the state’s strict rules that tourists observe a 14-day quarantine after arriving. The giveaway? Officials say the tourist, 23-year-old Tarique Peters, posted incriminating photos of himself sunning and carrying a surfboard around the beach on his Instagram account. Peters landed in Honolulu on Monday and is accused of immediately venturing off to see the sights. “He allegedly left his hotel room the day he arrived and traveled many places using public transportation,” the news release scolded. Local sleuths realized he’d Instagrammed a selfie from Bryant Park just a week ago, pegged him for a new arrival, and then ratted him out to authorities. Now his #newchallenge may be posting his $4,000 bail. (https://bit.ly/2Tc31Qe)

FAKE NEWS.... OR FLORIDA?!
I read a headline, you guess if the story is something that really happened in the great state of FLORIDA or is it #FakeNews made up to trick you and amuse me
A wanted Florida man was found hiding inside a dishwasher in a South Carolina mobile home ….. FLORIDA (https://on.wltx.com/2W4VhTC)
GOOD NEWS: Brought to you by #GiftCardChallenge GiftCardChallenge.org