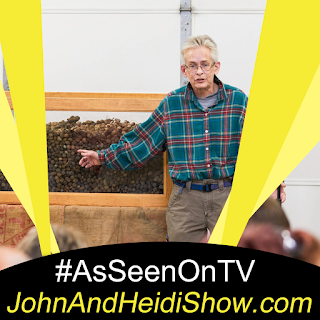 Today we visit with Mary Winchenbach. She's juggling her family, a growing business and a house full of turds in truTV’s heartfelt and and hilarious new half-hour series. Tirdy Works is set in Somerville, Maine, a small rural town with four paved roads. It features an off-kilter look at entrepreneurship, parenthood and life, told through the eyes of booming moose turd businesswoman Mary Winchenbach and her family.

A new study shows four seconds of high-intensity exertion repeated periodically throughout the day might counteract some of the unhealthy metabolic consequences of sitting for hours. The study relied on a specialized type of stationary bicycle that few of us will have available at home, but it suggest that even a few minutes — or seconds — of exercise each day could help substantially to bolster our health.

THIS IS YOUR BRAIN ON DRUGS: Brought to you by TimeForRehab.com!
Each day we share stories about people doing dumb things under the influence, but ADDICTION IS NO LAUGHING MATTER! If you or someone you know needs help, we're here! Learn more at TimeForRehab.com.
A Punta Gorda, Florida man called 9-1-1 multiple times and asked deputies to deliver him ice cream and liquor. Last Saturday, deputies responded to a Punta Gorda apartment after 65-year-old Michael James Gables called 9-1-1 to report an “emergency.” When deputies arrived at Gables' apartment, he asked them to take a $20 bill that was on the couch and return to his place with some liquor. Deputies told Gables that needing a liquor delivery wasn't an emergency and if he called again then he would be charged with misuse of 9-1-1. Gables told the deputies that he understood. The next day, Gables made another emergency call to 9-1-1 operators who dispatched deputies to his apartment. This time, Gables asked the deputies to take his ice cream out of the freezer since he wasn't able to get out of his recliner. Since Gables wasn't in distress or in need of medical attention, deputies placed him under arrest for misuse of 9-1-1.
(https://bit.ly/35igLxS)

Netflix has set the premiere date for Season 5, Part 2 of the Full House sequel series. It will hit the streaming service June 2

A sequel to the 2017 Netflix movie Bright could be coming. Will Smith is interested in returning, and a source claims Angelina Jolie is being considered for the role of the heavy.

Scientists say that asteroids were likely the source of Earth's first water.

Face ID was a great idea -- until large parts of the world were forced to wear face masks. Apple is apparently on it. Users are reporting a subtle new feature in the latest test version of its iPhone operating system (iOS 13.5) that will make it easier to unlock your iPhone without having to take off your protective face mask.

A study (Purdue University/University of Virginia) suggests that there may be a perfect salary for achieving personal fulfillment. The idea was to figure out at which salary range adults were best able to happily manage their work/life balance. Putting a number on that sort of thing is difficult, but the researchers managed the trick nonetheless. The study concluded that happiness will cost about $95,000 annually.
Police in California say traffic on a busy stretch of highway came to a halt when people got out of their vehicles to retrieve medical face masks littering the road.

With lots of time on our hands, we’re watching more traditional TV at night.


If you’ve run out of shows to watch on Netflix, switch over to YouTube for the Drain Addict. The YouTube channel devoted exclusively to an Australian plumber’s adventures unclogging drains. Drain Addict has over 400 videos on the channel.

Germany uncovers 2,000 tons of unexploded bombs every year. During World War II, the Allied forces dropped over a total of 2.7 million tons of bombs on Germany. Due to certain defects in their delay timers, a large number of bombs never exploded—around 10 percent, or 200,000 tons. As they've been discovered in years since, it's routine for German citizens to be evacuated from buildings or sectioned off on streets, while bomb experts handle the devices.

Dateline.... CHINA
Chinese Media has released a Lego animation video that mocks the U.S. response to the Coronavirus. (https://tmsnrt.rs/2Svc4eQ)

A Tennessee man was arrested over the weekend after he reportedly entered the wrong Mt. Juliet home wearing a gorilla costume and scared a six-year-old girl. Mt. Juliet police responded around 2:00 p.m. Sunday to a residence where they said a resident had confronted a man in the backyard after realizing he was just inside their home. Police said the man, who was wearing a gorilla costume, took off running, but was located by officers nearby on Portsmouth Court. Officers arrested the suspect, identified as Richard Muzick, a 31-year-old man from Old Hickory. According to police, the investigation revealed Muzick thought he was at someone else’s home and was looking for another individual. Muzick was booked into the Wilson County jail on a charge of aggravated burglary.
(https://bit.ly/3aQ46mE)

A driver in Michigan was clocked barreling down a highway at 180 mph — more than double the posted speed limit, state police said. The speed demon in a black 2016 Dodge Challenger was nabbed in the 70-mph zone on I-75 in Monroe County just before midnight April 19th. The cost of the citation doled out to the man is unclear since fines and court costs throughout the state vary. As some drivers in the state are taking advantage of near-empty roadways due to ongoing stay-at-home orders, troopers have noticed an uptick in speeding. Michigan State Police tweeted a photo of the citation given to the driver on Tuesday, but the post was later taken down. “MSP has seen an increase with high speeds on roadways during this pandemic,” the tweet read. “This person was cited for doing 180 mph in a 70-mph zone. MSP wants people to know, just because there is less traffic on the roads & warmer weather, there are no excuses for speeding.” (https://bit.ly/3f5mWJP)

FAKE NEWS.... OR FLORIDA?!
I read a headline, you guess if the story is something that really happened in the great state of FLORIDA or is it #FakeNews made up to trick you and amuse me
A Key West couple was arrested for having relations right outside of a police station ….. FLORIDA (https://bit.ly/2POA8Xe)
GOOD NEWS: Brought to you by #GiftCardChallenge GiftCardChallenge.org