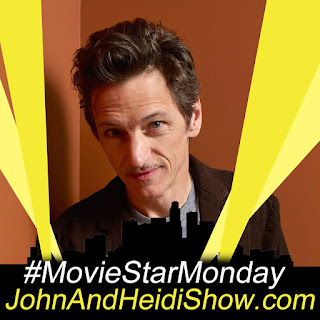 This #MovieStarMonday we visit with John Hawkes is an award-winning actor known for crafting memorable performances across a wide range of styles and genres. His latest projects include the features "End of Sentence," shot in Ireland with Logan Lerman and "Peanut Butter Falcon" with Shia LaBouf, which won a number of critics' honors as well as being recognized by the National Board of Review and winning the audience award at SXSW, along with Nicholas Winding Refn's crime drama "Too Old to Die Young" which premiered at the Cannes Film Festival and boasts an eclectic ensemble cast. Hawkes also reunited with other original cast members for the highly anticipated "Deadwood" reunion movie. and new film END OF SENTENCE now available on VOD & all digital platforms


An NBC Poll found that 80% of Americans think the country is “out of control” right now. (https://bit.ly/3dJZ25R)

A Wisconsin man has been ordered to serve five years in state prison following what investigators say was his 15th drunk driving offense. During a hearing conducted Wednesday via Zoom, 67-year-old Mark Alan Johnson was sentenced in connection with his guilty plea to a felony operating while intoxicated count. Johnson was arrested last November for OWI after driving his pickup truck into a ditch at an intersection near his home in Rice Lake, a northern Wisconsin city. Johnson, whose license had been revoked at the time of the one-vehicle crash, has been locked up in the Barron County jail since his arrest. Johnson, whose drunk driving collars have come in Wisconsin and neighboring Minnesota, is “eligible for the Substance Abuse Program after serving four years initial confinement,” according to a sentencing order. Johnson's blood alcohol content was measured at nearly twice the legal .08 limit. (https://bit.ly/30kev8u)


CNN Anchor Chris Cuomo was seen naked in the background of his wife’s yoga video on Instagram Live. (https://pge.sx/2XHonaT)


Ryan Seacrest is considering a full-time move back to Los Angeles following last month’s health scare because the lifestyle is more relaxed than New York. (https://pge.sx/30hDR6Z)

Demi Lovato beat out Ronda Rousey in a screaming match on a new CBS Show called “Game On.” (http://dailym.ai/2ByX4XI)


Amanda Seales is quitting “The Real” after a six month stint. (https://pge.sx/2AzJDGp)


A survey has found more boys than girls -- like unhealthy, fatty and sugary foods, meat, processed meat, and eggs. The girls questioned in the survey were more likely to enjoy fruit and vegetables.

A guy in Canada flew into a violent rage at a Wendy’s (in Colwood, B.C.) after staff forgot to put mustard on his burger. Staff called police after the man exited his car and began striking a plexiglass barrier that separates the restaurant's takeout window.

A naked man was taken down by numerous bystanders in New York City. A brief video clip shows the naked man fighting people. It’s believed that the man was on drugs. He wasn’t totally naked — the man was wearing socks and shoes.

A new government study finds U.S. children and teens are still downing too many “empty calories” — primarily from sugary beverages, sweets, and pizza. The study did turn up some good news: In recent years, kids have been eating fewer empty calories, versus a decade before. The bad news is those sources still account for more than one-quarter of kids’ total calories.

A mom in the UK has put an end to her kids raiding the sweets drawer by installing a vending machine. Sarah Balsdon found the machine on Facebook Marketplace. If the kids want sweets they can earn money by doing chores or doing homework.

Ladies, if your husband doesn’t remember to pick up milk on the way home or forgets your birthday, it may not be his fault. Research shows men are worse than women at remembering to do things in the future. Rather than simply not listening when asked to do something, it seems that they forget what they were told.

The stomach contents of a 110-year-old dinosaur have been revealed.

A guy in Brazil upset that a friend had been arrested by police. So he walked into a station house to inquire about what was going on. This would not have been such a bad idea except for one thing: the guy was wanted by the cops on robbery charges and his wanted picture was posted right there in the station house for everyone to see.

Some Maryland residents are taxed for the rain. As they say, "nothing is certain but death and taxes." Depending on where in the world you live, rain may be just as much of an inevitability. And for some Maryland residents, rain and taxes are both inescapable and tied together thanks to the "rain tax," which was passed by the state legislature and signed into law in 2012. Nine counties, as well as the city of Baltimore, pay the annual fee that the Center for Watershed Protection describes as a "user fee charged to property owners for the service of managing the polluted runoff coming from their property."

New Zealand has eliminated the Coronavirus after not having a single positive test in the past two weeks. (https://bit.ly/3dIsYze)

Spanish porn star Nacho Vidal is under investigation for manslaughter, after a man died during a ceremony involving toad venom. Vidal and two other individuals were arrested on May 29th, according to his lawyer, David Salvador. They were arrested on suspicion of manslaughter and following an 11-month investigation, according to a statement from Spain’s law enforcement agency, the Guardia Civil. They appeared before a judge on the same day. All three were released provisionally and investigations continue. Police have not named the man who died. The names of the two other people — a man and a woman — who were arrested along with Vidal have not been made public. Salvador told CNN the death was a “tragic accident” and that his client was not responsible. Police said the incident took place in July 2019 in the town of Enguera in eastern Spain. The person died during what the Guardia Civil called a “mystical ritual involving the inhalation of venomous vapors from the Bufo alvarius toad.” (https://bayareane.ws/3f2qpbh)

A man flew into a violent rage at a Vancouver Island Wendy’s after staff forgot to put mustard on his burger, according to police. Wendy’s staff members called police after the man exited his car and began striking a plexiglas barrier that separates the restaurant takeout window. The West Shore RCMP, which stands for “Royal Canadian Mounted Police, say the incident occurred at roughly 9:00 p.m. on Tuesday. “The suspect got out of his car and came up to the drive-thru window and began yelling at staff while he smashed the Plexiglas barrier and completely ripped it off the wall,” said Nancy Saggar of the RCMP. “Before leaving, the suspect threw the Plexiglas barrier underneath another vehicle in the parking lot,” said Saggar. Police say they are investigating the incident as a case of mischief and causing a disturbance. No Wendy's staff members were injured. Mounties are now asking the public to help identify the man. (https://rb.gy/mm8oas)