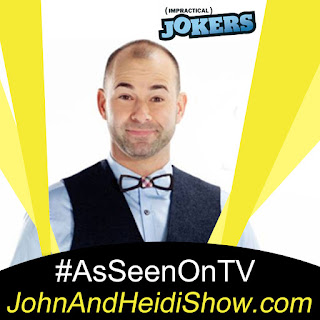 It's another #MovieStarMonday this time we chat with James S. Murray (aka MURR from the Impractical Jokers) In addition to his TV and film career, Murr is also an author! His latest thriller OBLITERATION is out now! https://amzn.to/2Zgbowg


A survey by Omaha Steaks found that 68% of men admit to feeling more like their father with each passing year. The average guy begins to feel like his father at the age of 37. (https://bit.ly/3hPW95G)

A Portland man who accidentally shot himself in the groin but told police he was robbed and shot by a homeless man at a bus stop was sentenced to nearly six years in federal prison. 35-year-old Marcus Anthony Davis Jr. wasn’t allowed to have a gun because he had been convicted of prior felonies and was on federal supervision for a drug offense at the time of the January 8th shooting. U.S. District Judge Karin J. Immergut sentenced Davis to five years and nine months in custody after he pleaded guilty to being a felon in possession of a firearm. Records showed that a single bullet traveled through the top of his penis, through his right testicle, into his upper inner right thigh, and exited through his lower right thigh. Davis claimed he had been robbed and shot by a white homeless man at a TriMet stop, but he couldn’t share any details about the suspect. (https://bit.ly/3d3AP9q)


“Real Housewives of Beverly Hills” star Lisa Rinna posed for a naked photo shoot wearing nothing but a pair of sunglasses. (https://pge.sx/2NlSCOw)

The AMC Theater Chain has reversed its position and will now require all moviegoers to wear a mask when theaters open in July. (https://bit.ly/3hTk5W3)

MTV and VH1 have hired a private investigator to root out any racist comments their stars may have made on social media. (https://pge.sx/2NcDrqO)

A growing number of businesses are borrowing testing strategies from the Adult Film Industry in an effort to get their employees back to work. (https://bit.ly/2zOp7Sw)

Cardi B posted an Instagram video in which she fired back at critics who claim she edits her photos. She walks around in a bikini saying she gained weight but, she’s not worried because she’s got “LIPO MONEY.” (https://pge.sx/37Fz7tL)

Comedian Chris D’Elia is denying accusations that he flirted with underage girls on Twitter. (https://pge.sx/3ddpbca)

“Cash Me Outside” girl Danielle Bregoli was recently treated in rehab for a pill addiction. (https://pge.sx/37LNInu)

Justin Bieber denied sexual assault allegations against him in a lengthy Instagram post that included photos that showed him out partying with Selena Gomez on the night of the alleged incident. (https://bit.ly/3fImQaw)

“Instagram Playboy” Dan Bilzerian is denying claims that he lost a book deal with Simon & Schuster after he failed to deliver a manuscript of his memoir. (https://pge.sx/3dqzPwe)

There is a town in Nebraska with a population of one. Elsie Eiler lives in a town called Monowi, which is in the state of Nebraska—and she's the only one. She used to live there with her husband Rudy, but when he passed away in 2004, she became Monowi's sole resident. Elsie is also the town's mayor, bartender, and librarian, and is responsible for paying herself taxes and granting herself a liquor license. As of 2018, the tiny population makes Monowi the only incorporated town in the U.S. with only one resident, according to the BBC.

A man in Vienna, Austria has been fined 500 euros ($565) for breaking wind loudly in front of police — a move that the Austrian capital's police force was at pains to defend on Tuesday. (https://abcn.ws/2N9AhUT)

The Hernando County Sheriff's Office released the arrest photo and report of a man charged in a machete attack that took place on Saturday. Though Orlando Weekly usually declines to publish mugshots of people who have been arrested, the booking photo of 25-year-old defendant Justin Arthur Allen Couch reveals that a machete is tattooed prominently on his face. Police said in the post that Couch was attending “a gathering” in the victim's residence on Monday afternoon, when he confronted the victim as he returned home. The two men stepped outside and witnesses told police that “Couch produced a machete and approached the victim in an aggressive manner.” The victim says he tried to block the blade with his left arm, which was struck by the machete, causing the victim to pass out. Couch was arrested Tuesday afternoon and charged with aggravated battery. His bond was set at $10,000. (https://bit.ly/2CofJWJ)

A California man was arrested for looting after he livestreamed the alleged thefts to Facebook. Cops say that 21-year-old Terion Alexander Jr. recorded himself and three other suspects looting a Valero gas station in San Bernardino early on June 1st. After leaving the gas station, Alexander Jr. and the other suspects went across the street and vandalized a Wienerschnitzel fast food restaurant. Police released screenshots of Alexander Jr.’s livestream. One of the photos shows damage to the kitchen area of the Wienerschnitzel. Alexander Jr. was busted on a warrant last Thursday and allegedly admitted to detectives that he was involved in the crimes. Cops said he was arrested and jailed. (https://bit.ly/3fxjJSV)

A Miami Man who threw his feces at a judge during a burglary was acquitted for his crimes ….. FLORIDA (https://nyp.st/2ICdm2W)

A commencement recording of the national anthem became so much better than a social-distancing performance when a man wandering by decided to join in with magnificent harmonies. Portland State University graduate Madisen Hallberg was being recorded in a public city park that runs through the campus, after the school’s decision to hold a virtual ceremony on June 14. Suddenly, while the video crew was recording her rendition of The Star Spangled Banner, the Oregon opera singer Emmanuel Henreid happened to walk by. The classically trained singer who performs with the Portland Opera wanted to join in. It was completely serendipitous and, as you can see by the video, totally beautiful. “Once he started singing I immediately relaxed into the sound of his voice,” Hallberg told GNN. “His voice was so good, and I realized I was getting the chance to sing with a super talented musician!” https://www.youtube.com/watch?v=y2V0rG_4Ax4