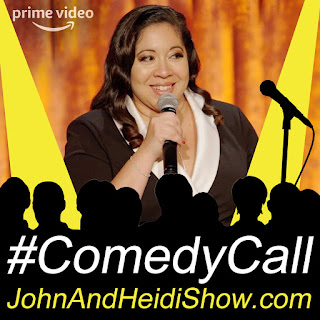 We talk with very funny comedian Gina Brillon about her new 1 hour Amazon Prime special, Gina Brillon: The Floor Is Lava available world-wide. Brillon pulls no punches when discussing her childhood, culture and the transition from single to married life with her Midwestern husband. In the hour-long special, Gina effortlessly guides the audience on a journey of love, laughter and heart.

A new study found that exercising too much may shorten your life span. (https://bit.ly/2B0x3QX)

A British man who was caught at Brussels Airport while trying to smuggle cocaine into Belgium by hiding it in an artificial penis has been sentenced to 38 months in prison. The man was arrested on February 8th when he landed at Brussels Airport on a flight from Jamaica. He tested positive for cocaine, after which the man was transferred to the University hospital of Jette in Brussels for a more in-depth investigation. At the hospital, doctors and police officers established that the man had been equipped with an artificial penis, in which 127 grams of white powder, later identified as cocaine, was hidden. The man stated that he had visited his mother in Jamaica, and an acquaintance there had offered him cocaine. He said he took it with him to use it himself, once at home. The Public Prosecutor’s Office of Halle-Vilvoorde demanded a prison sentence, which he received. (https://bit.ly/3fJhgVr)

A groom in Romania found himself a new bride within 24 hours after his fiancé got cold feet and took off. The groom called up his old girlfriends, convinced one to marry him, and didn’t tell anyone until she walked down the aisle.

A Texas man was arrested for throwing a plate of hot peppers at his wife during an argument. Police say the wife accused him of having an affair. Needless to say, prosecutors are now vowing to throw the book at him. (https://bit.ly/30ZDyhH)

A Florida man was caught on video vandalizing a school in the NUDE. (https://bit.ly/314IZvM)

A Rasmussen Poll found that 34% of Americans think a second Civil War is likely. (https://bit.ly/37ERDCm)

Ford is planning to take on Tesla with its “hands-free driving” feature in the new Mustang.(https://bit.ly/37HbK2N)

A group of U.S. Senators unveiled a bill that will end legal protections for Google if it continues to suppress content it doesn’t agree with. (https://yhoo.it/3dgHLjv)

NASA is racing to send a Rover up to Mars before the planet is out of range at the end of July. It’s an unmanned flight. (https://bit.ly/3fDIUmY)

Jean Kennedy Smith, the last surviving sibling of JFK, has died at the age of 92. (http://dailym.ai/3efokcc)

Three eagles were found co-parenting three eaglets in Illinois. In a nest overlooking the Mississippi River, one female and two male eagles were found raising three babies together in April 2019. The situation is unusual for the birds, which are normally very territorial. The unexpected family has baffled experts and thrilled fans, according to the National Audobon Society.

Prince Charles says his sense of smell and taste still isn’t back three months’ after testing positive for Coronavirus. (https://bbc.in/2zJHjwx)

A viral video shows a defiant shopper fought his way into a Florida Walmart after he was denied entry for refusing to wear a face mask. The clip, which has been viewed four million times, shows the gray-haired man scuffling with an employee at the Orlando superstore Saturday — the same day face masks became mandatory in the county. With his arms out, the worker tries to block the man from entering. “You gotta wear a mask, bro!” the man behind the camera says. The older man then shoves the Walmart worker, even falling to the ground at one point. Clearly determined, the man gets up and scrambles his way inside as the worker continues to try to block him. “You want a mask, man?” one person can be heard saying. “I got some!” The shopper ignores the offer and makes his way halfway up an aisle. Ultimately, the man angrily agrees to leave, the clip shows — but not before the worker tells him that he was “spitting all over the f—ing place.” (https://bit.ly/3dnYpxQ)

Police have collared the goon who knocked an elderly woman to the ground in a random attack — a convicted sex offender with more than 100 prior arrests, according to police and sources. “Thanks to the outstanding work of @NYPDDetectives, this suspect has been apprehended,” Police Commissioner Dermot Shea tweeted Tuesday. The 92-year-old woman was pushed down while walking down Third Avenue near East 16th Street in the Gramercy Park neighborhood at about 3:30 p.m. on Friday. Video footage was released of the attack Monday night, and by Tuesday morning, police had 31-year-old Rashid Brimmage in custody on a charge of assault. Police sources said cops recognized the attacker, who has had dozens of run-ins with law enforcement — including 101 arrests. (https://bit.ly/3hCj7NE)

Two Orange County Men were arrested after making homemade bombs to scare a tenant out of their garage ….. FLORIDA (https://hrld.us/2KQnV52)

She Was Laid Off. So, She Became The 'Lasagna Lady' Serving Thousands Of Free Meals To Those In Need