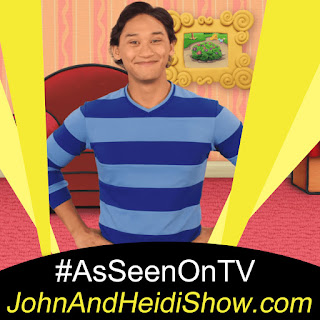 Today we visit with Josh Dela Cruz, the host of Nickelodeon’s Blue’s Clues & You. When the original Blue’s Clues premiered in 1996, it became one of the most popular kids shows of all time, creating a more interactive way for young viewers to watch TV. Josh – was inspired by the original series to become an actor. Now he's the new live-action host and they're announcing a brand-new special episode, "Blue's Sing-Along Spectacular," airing July 14th at 9 a.m. (ET/PT) on Nickelodeon, it's Bluestock -- the Blue's Clue's music concert -- so Blue and her friends, pop star Ally Brooke, the sun (voiced by gospel sensation Yolanda Adams), Mailbox, Tickety Tock, Magenta, Josh, and Joe (Donovan Patton) take to the stage to perform show-stopping songs.

A British survey found that 1 in 3 dog owners would choose their pet over their partner. (https://bit.ly/3dLXyXR)

Americans have lost all hope of getting a summer body this year due to the COVID-19 pandemic. The survey of 2,000 Americans found that 63 percent are giving up on a summer body and are now focusing their efforts on achieving a post-quarantine body. 76 percent of 2,000 respondents shared they’ve gained up to 16 pounds during their time in isolation. Many admit drinking more alcohol and getting less exercise.

Ryan Seacrest has split from his on again-off again girlfriend, Shayna Taylor, and was seen partying with a mystery woman in Mexico. (https://pge.sx/3dNGmB4)

Larry David’s HBO character will likely get to tackle the pandemic thanks to the Season 11 renewal of Curb Your Enthusiasm. David said in a statement: “Believe me, I’m as upset about this as you are. One day I can only hope that HBO will come to their senses and grant me the cancellation I so richly deserve.”

Justin Bieber has rented a $5 million home in the Hamptons for a three-week stay. (https://pge.sx/2VAHf9Q)

A video of a dancer being kicked in Pakistan because of her provocative dance routine has gone viral. (http://dailym.ai/2BkVkl4)

The Brooklyn Home where Al Capone was born is on the market for $2.9 million dollars. (https://bit.ly/3dG05mh)

Kim Kardashian says she has a billion dollar brand after signing a new deal with the COTY Cosmetics line. (https://bit.ly/2AcB707)

The iPhone went on sale thirteen years ago this week. (https://bit.ly/2CWmeAb)

A Chinese villager was disappointed to find the bear that had been terrorizing his chickens could also hold its liquor. The poultry farmer had plotted to trap the black bear by baiting it with honey mixed with two liters of strong alcohol. The next morning he found the spiked honey gone and two dead chickens.

I have an update for you. Last month a San Diego Starbucks employee refused to serve a customer who wasn’t wearing a mask, so she took a photo of him and posted it on Facebook. Within hours the post went viral, bringing more than 133,000 comments — most criticizing Amber Lynn Gilles. Starbucks backed their employee, Lenin Gutierrez, and a coworker put up a “virtual tip jar” on GoFundMe for the barista. As of today the amount raised is over $102,000.

If you’re going to a job interview, don’t swipe someone’s wallet and expect to be hired. Two jobseekers learned that lesson the hard way after British police snagged them with a simple sting: getting the applicants’ would-be new boss to tell them, “You’re hired!” Excited, the two alleged thieves rushed back to the office where they found detectives and an unhappy employer waiting for them.

A Florida Man was arrested for stealing, crashing, and abandoning a $1 million dollar yacht. FLORIDA (https://bit.ly/2BAS5pw)