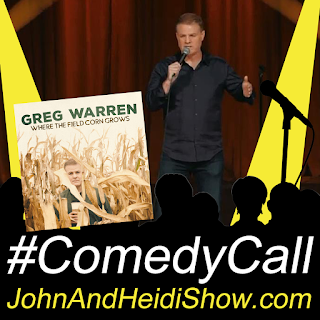 Today we have a #ComedyCall with a very funny comedian Greg Warren. His new special Where The Field Corn Grows is available now on Amazon PRIME https://zurl.co/xBOp

A new study shows that men should limit their alcohol intake to one small glass of wine or beer a day in order to avoid an early death. (http://dailym.ai/3fBnlnl)

A 26-year-old man is in jail following an attempt to smuggle more than 9,000 pounds of marijuana over the Peace Bridge in Buffalo, New York. Prabjot Nagra, a citizen of India, was arrested and charged with possession with the intent to distribute 1,000 kilograms or more of marijuana and importation of marijuana into the United States. Federal agents say Nagra tried to enter the United States just before midnight on June 25th, driving a commercial truck with Ontario, Canada license plates. During an inspection, Customs and Border Protection Officers recovered multiple packages of vacuum-sealed bags, which field-tested positive for marijuana. Approximately 8,320 packages of suspected marijuana weighing approximately 9,472 pounds were removed. The drugs are valued at approximately $20,000,000. Nagra is being held pending a detention hearing on Wednesday, July 1st. The charges he’s facing carry a mandatory minimum penalty of ten years in prison and a maximum of life. (https://bit.ly/391CuvP)

“Entourage” star Kevin Connolly is being accused of sexually assaulting a costume designer during a 2005 wrap party in New York. (https://pge.sx/2CCi1S8)

Newly released tax documents reveal that Ryan Seacrest’s charity gives more money to his family than it does to actual causes. (https://bit.ly/2Cim3iE)

A study by the Moderna Pharmaceutical Company found that a Coronavirus vaccine produced antibodies in every single person it was tested on. (https://bit.ly/32gTsVA)

Researchers (Wharton) found that women tend to shop, while men buy. Men are goal-oriented and to the point, while women meander and soak up multiple facets of the overall experience.

A new bee infestation has again forced the closure of the Southern Nevada Visitors Center near Searchlight, Nevada. Maintenance crews discovered hundreds of bees swarming the faucets, toilets and other facilities. The visitors center closed May 27 for the same reason. And NDOT spokesman said the facility likely will be closed for seven days while they remove the bees.

For eleven years, the search engine Ecosia has used most of the revenue from advertising on its website and app towards planting trees — and this month they planted their 100-millionth tree.

The blob of toothpaste that sits on your toothbrush has a name. It's called a "nurdle."

Prostitutes in Germany are protesting to go back to work after the Government shut down brothels because of Coronavirus concerns. (https://cnb.cx/2OvOGLV)

A shark documentary filmmaker was bitten by one of the predators in Australia — but professed to reporters, “I still love sharks,” as she was taken away to a hospital on a stretcher for her injuries. “I still love sharks! Sharks are beautiful!” a smiling Anika Craney shouted as she was wheeled into Cairns Hospital in Queensland following the attack. 29-year-old Craney was gnawed on her lower left leg by a shark while swimming off the coast of Fitzroy Island, near Cairns, Queensland Tuesday afternoon. “There were doctors on scene at Fitzroy Island and they provided first aid…Craney ended up with a possible fracture of the left lower ankle and some lacerations from the shark bite,” Queensland Ambulance Service critical care flight paramedic Terry Cumming told the news outlet. (https://bit.ly/2CEaAcS)

A Fort Lauderdale Summer School Teacher was fired and arrested for giving a spiked fruit punch drink to her students ….. FAKE NEWS