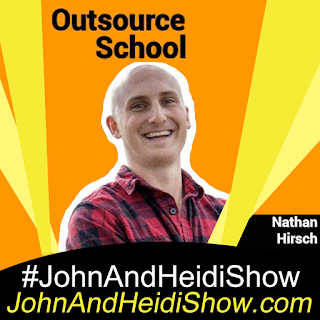 Nathan Hirsch is an entrepreneur who has built and sold companies and has now created a new venture that helps others build and grow their own company. OutsourceSchool.com

Peter Gabriel is conducting a study with the Interspecies Project that hopes to find a way to let humans speak to pets.(https://bit.ly/2ZGh1p6)

In Maine, three people face drug charges after officials searched the car and home of a woman, seizing about $12,000 worth of heroin and other drugs — and a live alligator. The 2-foot-long alligator, which was being housed in a Rubbermaid tub, was taken from the home.

Actress Lori Loughlin and husband Mossimo Giannulli have sold their California mansion for an estimated $10 million below what they originally listed it for in January. The former Full House star and her fashion designer husband are expected to be sentenced next month after admitting to conspiracy in the sweeping college admissions scandal.

Mike Tyson is going to battle a shark during a segment on “Shark Week.” The fight is supposed to take place in a cage on a dock.(https://bit.ly/392xYNu)

According to a new survey, six in 10 Americans say their sleep routine during quarantine has them feeling more exhausted than they’ve ever felt in their life. The poll finds nearly 70 percent agree their sleeping habits have become inconsistent. Another 63 percent think their sleep schedules might be permanently ruined by the pandemic.

Facebook CEO Mark Zuckerberg continues to be mocked for wearing way too much sunscreen while he surfed in Hawaii. (https://bit.ly/30tYcEJ)

A study by the U.S. Department of Agriculture warns that the Asian Longhorn Beetle is destroying our trees. (https://bit.ly/3fN0Qfg)

A national coin shortage caused by the Coronavirus has lead some banks to pay customers extra for returning coins. (https://bit.ly/30sgE0r)

Americans have a troubling understanding of computer code. According to a 2014 study conducted by VoucherCloud and published by the L.A. Times, 1 in 9 Americans—exactly 11 percent of the population—think HTML is actually a disease. Oof!

An Italian Priest has become a Youtube Star after his short videos about the bible went viral. He’s a young guy that makes a lot of weird jokes. (https://bit.ly/39eY67T)

Peel Regional Police have made an arrest in connection to a series of indecent acts committed in Mississauga, Canada. Throughout July, 74-year-old Peter Melegos allegedly tied used condoms to unoccupied vehicles in the parking lots of shopping centers around the city. Melegos was arrested and charged with eleven counts of Mischief Over, two counts of Criminal Harassment, one count of Commit an Indecent Act, and one count of Voyeurism. He will appear at the Ontario Court of Justice in the City of Brampton on September 18th, in answer to the charges. The investigation is still ongoing, and investigators believe more incidents could have occurred across the GTA. (https://bit.ly/2CHpqPR)

A woman was arrested this weekend after police say she allegedly broke into her neighbor’s Southwest Florida pool several times this past weekend for a simple reason - to go skinny dipping. Charlotte County Sheriff’s Office deputies were called to the Englewood home starting Friday after the owner, David Wardell, said his pool cage had been cut open, A report said deputies collected cigarettes, keys, and women’s underwear, but no arrests were made. The following day, Wardell said he saw 22-year-old Capri Wiedemann swimming in the pool naked from a security camera installed while he was in Canada. Wiedemann initially denied being at the scene, but her mother told deputies she does swim in the neighbor’s pool often. She was arrested and charged with trespassing and burglary. (https://bit.ly/3gWKPDG)

A Jacksonville Man was arrested after entering a convenience store with a live alligator in his arms….. FLORIDA (https://bit.ly/3ePvJOK)