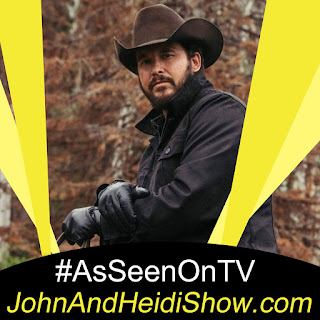 Today we visit with Cole Hauser, best known for his roles in the films School Ties, Dazed and Confused, Good Will Hunting, Pitch Black, Tigerland, Hart's War, Tears of the Sun, 2 Fast 2 Furious, The Cave, The Break-Up, A Good Day to Die Hard, Olympus Has Fallen, and Transcendence. He's now teamed up with Kevin Costner for the very popular series Yellowstone, the third season recently started on the Paramount Network!

A new study shows that consuming leafy greens can lead to a longer life. (https://bit.ly/2VsB6g1)

According to the New Smyrna Beach Police Department, a Florida man is behind bars after he attempted to steal an airplane at the New Smyrna Beach Municipal Airport so he could fly to California to meet his girlfriend while carrying nearly 500 grams of marijuana. An officer at the airport was notified by a flight instructor that a man with a blue bag was spotted crouching on the wing of a plane station on a portion of the tarmac that was not accessible to the public. According to a report, the man asked the flight instructor how he could fly a plane. By the time officers reached the tarmac, the man was sitting in the right seat of the aircraft. When officers approached him, he again asked if they knew how to fly the plane. The man then jumped from the emergency exit window of the plane and was detained by officers. (https://bit.ly/2YsPab6)

Margot Robbie is going to star in an all-female version of “Pirates Of The Caribbean.” (https://bit.ly/2BJbPY7)

An Elderly Woman accidentally flashed the crowd during a Zoom Bat Mitzvah for Gilbert Godfried’s Daughter.(https://pge.sx/2YoS68K)

Prince Harry and Meghan Markle have signed with the prestigious “Harry Walker” speaking agency and they’re expected to earn $1 million per speech. (https://pge.sx/2BhWQnZ)

Disney is delaying the July re-opening of its California theme parks until State Officials give them more guidance. People who bought tickets for July are furious. (https://bit.ly/2ViEOIY)

A New Jersey couple was busted for running a $6 million dollar online dating scam. They were posing as single people, getting into relationships, and then asking their new partners for “financial assistance,” at which point they’d split once they got the money. (https://bit.ly/2BOhPyw)

The NYPD arrested a man who claimed to be Jesus after he got into a nude brawl with three of his followers. The man had been squatting in Washington Square Park for several months. (https://bit.ly/2BPKZO4)

Earth is hit with more energy from the sun each hour than the planet uses in a year. Solar panels are a popular choice for anyone who's interested in living a more planet-friendly existence. And if you ever thought there might not be enough sunlight to go around, then think again. Some 430 quintillion Joules of energy from the sun hits the Earth every hour, while the entire population of the planet only uses 410 quintillion Joules each year, according to the U.S. Department of Energy via Business Insider.

A 114-year-old Ethiopian Monk has survived the Coronavirus. (https://bit.ly/31obgxB)

A Wisconsin woman had five pounds of opossum in her headlights. According to witnesses and a police report, the woman performed a spiritual ritual on a dead opossum in the road, then pulled out a Green Bay Packers lawn chair from her vehicle and urged the animal to “repent.” The woman was apparently driving on a Waukesha road when she saw the dead critter. According to witnesses, the woman got out of her vehicle, opened the passenger door, and threw windshield wiper fluid on the opossum. A second person said the woman took out the lawn chair and yelled “repent” at the dead animal. A person who had been following the woman’s vehicle called the police and reported that her behavior was “erratic.” According to the police log, the animal was eventually removed from the highway. (https://bit.ly/3eIH3wQ)

A Florida woman who called 9-1-1 four times Wednesday to ask for a ride to a nearby city was given a lift to jail instead. 31-year-old Sarah Alameh of Eagle Lake, which is sixty miles southwest of Orlando, was charged with misuse of 9-1-1. Alameh first called the emergency response line at 2:45 a.m. and said “hello” before hanging up, the department said. Officers went to the location of the call and didn’t find anyone. She made a second call at 3:00 a.m. and the call disconnected. Officers responded to the same location and found Alameh in a hospital parking lot. She told an officer she was the woman who called and needed a ride to another city. She then called 9-1-1 to complain about the officer and eventually made yet another call. Officers responded and took Alameh to Polk County Jail. (https://bit.ly/31fjEzi)

A Florida woman was arrested for assaulting her boyfriend with a pizza. FLORIDA (https://bit.ly/3icbtcX)