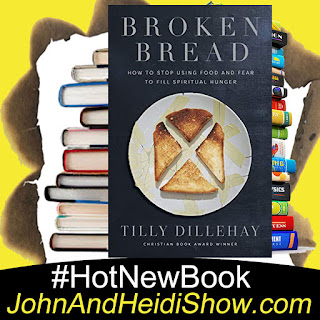 Today we visit with Christian Book Award winner Tilly Dillehay. In her new book Broken Bread: How to Stop Using Food and Fear to Fill Spiritual Hunger, she encourages readers to focus less on food and more on the people around their table, and even more so during these tumultuous times.


A survey by Triple-A (AAA) is predicting that fewer Americans will take road trips over the 4th of July Weekend. They’re predicting road trips will be down by 3%. (https://bit.ly/2NKVnZV)

A group of concerned residents in the Yaletown area say a man exposed himself during the daytime while jumping on a woman's car in the middle of a Downtown Vancouver intersection. In a Twitter post, a group called A Safer Vancouver writes that the man, “exposed himself yesterday after jumping all over a woman's car.” The group also shares a couple videos of the incident, which show a distressed man with his pants falling down past his waist jumping on to the hood of a vehicle. The man also runs down the street and appears to be swinging a piece of clothing over his head; he also tosses a business's sign over his head. A person in the video says, “The poor woman in the car. She'll never forget this.” The police stated that the man was reportedly high on drugs and had to be taken into custody by police under the Mental Health Act. (https://bit.ly/2Vrtf2o)

MSNBC has named Weekend Morning Host Joy Reid as the anchor of the 7:00 p.m. time slot that’s been vacant since they fired Chris Matthews. The show isn’t expected to launch until August. (https://on.wsj.com/3816VBC)

Emily Ratajkowski posted a series of bikini pictures to celebrate her first day as a blonde. (https://pge.sx/2VhZS2d)

A group of hackers claim to have dirt on LeBron James, Mariah Carey, and Nicki Minaj and they’re selling it for $600,000 on the Dark Web. (https://pge.sx/3dwFPn5)

A video of a Delaware man who caught an eight-foot shark with his bare hands has gone viral. Witnesses say the man was drunk at the time. (https://bit.ly/2CDlsYK)

A video of a New York man who remains shockingly calm despite the fact that he has a massive kitchen knife sticking out of his head has gone viral. Police did not release the name of the 36-year-old man. (https://bit.ly/2Vdseef)

Cardi B’s jumpsuit that famously split during her performance at Bonaroo is going up for auction. (https://pge.sx/3exJKBh)

America is expected to be left off the “safe list” of countries the European Union can travel to. (https://bit.ly/2Ajb0F2)

The Queen celebrates two birthdays every year. Her Majesty Queen Elizabeth II was born on April 21, 1926, which is why she celebrates her actual birthday each spring. However, the head of the British royal family also observes a second "official" birthday celebration called the Trooping the Colour. King George II started the tradition in 1748 because his own birthday was in November, which was too cold for an annual parade. He decided to hold an additional ceremony during the warmer weather.

A Canadian Man was busted for trying to bring 400 pounds of marijuana across the U.S. Border in a garbage truck. (https://bit.ly/2Zk9daX)

An Oregon man was briefly jailed for contempt after he refused to wear a mask and walked out of the courtroom where he was scheduled to appear for a harassment charge and a traffic violation. John Kulbeth was anxious to get his court appearance completed last Wednesday. He arrived for municipal court in Sweet Home, Oregon, an hour earlier than his scheduled 10:00 a.m. appearance. A court clerk advised him to put on a face mask, he declined and stood in the back of the courtroom with his 6-year-old daughter, Baylee, far away from everyone else. Kulbeth told the judge he would leave, took his daughter’s hand, and walked to the parking lot. Sweet Home Police Chief Jeff Lynn approached Kulbeth and told him the judge had ordered a warrant for his arrest. Kulbeth was not arrested for refusing to wear a mask, but because he left the courtroom without his case being completed. (https://bit.ly/2ZilooT)

UK Police say that a “brand new” Lamborghini was totaled in a crash — just twenty minutes after being taken out of the showroom. West Yorkshire police tweeted that the unlucky driver behind the wheel of a black Lamborghini Huracan Spyder — which reportedly start at just under $265,000 for 2020 models — stopped due to a mechanical failure Wednesday on the M1 in West Yorkshire when it was struck from behind by an “innocent motorist.” BBC News reported that the driver of the second vehicle, a van, suffered head injuries in the crash, but was not seriously hurt. Part of the highway had to be shut down to clear out the Lamborghini and the van, causing huge delays. The driver behind the wheel of the quarter-million-dollar sports car has not been immediately identified. (https://bit.ly/2YxqSgv)

Police in Tampa busted a Boy Scout Leader for smuggling an illegal shark home from a camping trip ….. FAKE NEWS