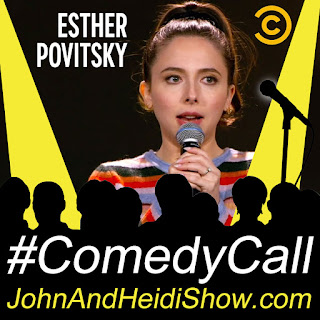 Today we have a #ComedyCall with very funny comedian and actress Esther Povitsky. She most recently starred as Izzy in the Hulu series DOLLFACE (opposite Kat Dennings) and she was the co-creator, co-writer, producer and star of the comedy series ALONE TOGETHER. She’s had recurring roles on “Crazy Ex-Girlfriend,” “Love,” and “Difficult People.” Additionally, she guest-starred in “Brooklyn 99,” Comedy Central’s “Workaholics” and “Key & Peele,” and “Lady Dynamite.” Her debut special Hot For My Name,” is on Comedy Central. #HotForMyName.


A new study found that all mammals share equal brain connectivity and have the same speed of thinking regardless of the size of their brain. (https://bit.ly/3eXqlJz)

Dramatic video captured a melee that erupted at Puerto Rico’s international airport in San Juan after a drunken woman refused to get off a Philadelphia-bound plane. The chaotic incident took place Monday at the Luis Muñoz Marín International Airport, where the woman refused to disembark at the crew’s request. Meanwhile, another passenger became ill around the same time – setting the stage for the ensuing bedlam after the captain canceled the flight by invoking a Coronavirus policy that allows such action for an illness. Footage shared by passenger Jorge Luis Vargas captures the pilot’s poorly received announcement. In a second video, a crowd of people is seen assaulting a woman inside the terminal. Two women involved refused medical attention, the Police were called, and arrests were made. (https://bit.ly/3hrSJVO)

Showbiz insiders say Ne Ne Leakes may not return to the “Real Housewives of Atlanta.” (https://pge.sx/2DbrlMN)

Jennifer Lopez was left stranded at a Hamptons Beach after her dune buggies got towed. The sign clearly said you couldn’t park there. (https://pge.sx/3jygdu9)

The Federal Government has reached a $2 billion dollar deal with the Pfizer pharmaceutical company on a potential Coronavirus vaccine that would be free to all Americans if it meets approval. (https://bit.ly/2WLJAiR)

A Federal Grand Jury indicted two Chinese Nationals who attempted to hack into our research institutions and steal vaccine details for the Chinese Government. (https://bit.ly/39ryEfG)

A South Korean study found that people are more likely to contract the Coronavirus from members of their own households than from contacts outside the home. (https://tmsnrt.rs/39lX4XR)

A couple in the UK has won a court case that allows them to name their son Lucifer. (https://bit.ly/3hsFqV7)

A group of Polish football fans rented large cranes so they could look into a stadium that banned fans because of social distancing concerns. (https://bit.ly/3eYxjhC)

President Coolidge had a childish sense of humor. Believe it or not, the 30th U.S. president thought it was hilarious to push the emergency buzzer on his desk and then hide when the Secret Service came running.

Hospitals in the UK are deploying R2-D2 like robots to clean up surgery rooms during the Coronavirus pandemic. (https://bit.ly/2OXYrTc)

A South Carolina man who was recorded walking around a Walmart “coughing on food items and general merchandise” has been arrested on a pair of felony charges. 39-year-old Kyle Arendell was busted yesterday for aggravated breach of peace and malicious injury to property in connection with a disturbance at Walmart. As seen in a video recorded by a fellow shopper, Arendell--who is not wearing a protective mask--deliberately coughs on a variety of items as he pushes a blue cart across the store. Hacking loudly, Arendell “did intentionally cause a scene.” While court records do not reveal why Arendell went on the coughing rampage, he allegedly claimed he “could or did have COVID-19.” Arendell is locked up in the county jail in lieu of $6,000 bond. In light of Arendell’s conduct, cops say, Walmart had to destroy merchandise because they could not sell the “infected, damaged items.” (https://bit.ly/32R1O6D)

He flipped out. A Florida man was caught on camera trying to evade arrest — by cartwheeling away from the police. The now-viral footage shows the gymnastics enthusiast blocking the path of a truck at a Wawa in Orlando, by doing a flip in the middle of the roadway. Officers took him down for apparently blocking traffic, but the man was able to wiggle out of their grasp. He then launched into a cartwheel — but didn’t get very far. The Orange County Sheriff’s Department identified the spry 40-year-old as Gianfranco Fernandez, according to Orlando outlet WOFL-TV. He was charged with battery on a law enforcement officer and resisting arrest. (https://bit.ly/2OWgby9)

A Vero Beach Man appealed his drinking and driving arrest because he only drank when he was at stoplights ….. FLORIDA (https://bit.ly/2He3taY)