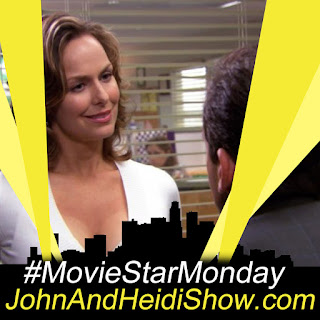 It's another #MovieStarMonday this time we chat with Melora Hardin

A survey of parents with an infant found respondents are faced with about 34 tough decisions per week, or over 1,760 difficult decisions in baby’s first year. Choosing a name for their baby was found to be the most difficult decision new parents face (37%), followed by deciding whether to breastfeed or to use formula (34%).

This is not the usual adventure on Sesame Street you would expect from your childhood. A suspected drunk driver smashed into a Chevron gas station along the Seabeck Highway in Washington on Sunday morning, then drove away from the scene. He made it to Sesame Street where he abandoned his damaged SUV and ran off into the woods. Police dog Heiko was brought to the scene and it didn't take long for him to track down their suspect hiding in the woods, where he surrendered without further incident. No one was injured in the ordeal. Deputies learned it was the driver's fifth DUI within ten years and he was booked into the Kitsap County Jail for investigation of felony DUI, hit and run, driving with a suspended license and for two previous DUI warrants. (https://bit.ly/38yRtNj)

Film Producer Shaun MacGillivray says that for a big budget studio film, COVID testing and safety could increase a budget by 15 to 20%. (https://bit.ly/2ZJ5cxf)

Critics took to Twitter to complain about the upcoming film “The Tax Collector,” stating that actor Shia LaBeouf is doing a form of “brownface” by appearing as a Hispanic gangster. (https://pge.sx/3gCcycI)

Netflix announced it has renewed Dead To Me for a third and final season. Season 2 was released on May 8.

A 20-year-old female dog named Augie, who lives in Tennessee, has just been named the world’s oldest living Golden Retriever. Augie is 140 in dog years.(https://bit.ly/2B6aPgB)

Unions representing Disneyland Workers are pushing back on plans to reopen the park as Coronavirus cases continue to rise in California.(https://bit.ly/2YuN0YN)

The Volo Auto Museum in Crystal Lake, Illinois says the General Lee car from “The Dukes of Hazzard” T.V. show will not be moving despite sporting a Confederate flag. (https://cnn.it/2VSFKnH)

A drunken father’s humiliating arm-wrestling loss to his young son in Kentucky sparked a shooting — and then an eight-hour standoff with deputies. This dad reportedly “became agitated” after losing to his son several times and then fired two shows inside the home. (https://bit.ly/3fbDvUm)

Uber has agreed on a deal to buy the food-delivery app “Postmates.” Uber and Postmates reportedly agreed on a “$2.65 billion all-stock deal.” (https://cnb.cx/2BI2AHT)

Dog owners usually use the “multiply by seven” method to determine their dogs age, but a new study conducted by the University of California San Diego School of Medicine determined that it’s a myth. (https://bit.ly/31QSM9i)

Kanye West just got official approval to start building a 52,000 square foot home on his ranch in Wyoming. (https://bit.ly/2BLT9XW)

A football fan once dedicated his obit to insulting an NFL team. True story: A lifetime Cleveland Browns fan and season ticket holder requested in his obituary for "six Cleveland Browns pallbearers" at his funeral. Why? "So the Browns can let him down one last time." Burn!

Pubs have reopened in England after a four-month shutdown. It was officially called “Super Saturday” and thirsty Brits lined up even before pubs threw open their doors at 6:00 a.m. to ensure they could drink alcohol for breakfast. (https://bit.ly/2YWobFf)

An Arkansas man fired gunshots through the front window of a pizzeria after arguing with an employee over getting an insufficient amount of toppings on his pizza pie. Michael Brown was arrested Monday on multiple felony charges after the violent encounter at Pie Five restaurant in Little Rock. Pie Five employee Eboni Smith said Brown became upset with her because she wasn’t putting enough toppings on his pizza. She called her manager and handed the phone to Brown, which he proceeded to throw at Smith’s face. Another employee asked him to leave, and he began arguing and went outside to his white van. He then walked back to the restaurant holding a gun. Brown was locked out of the restaurant, so he shot the glass out of the front door while standing on the patio area. He was arrested and charged with six felony terrorist act counts and a misdemeanor battery rap. (https://bit.ly/2ZCNKKC)

Police say that a 72-year-old Pennsylvania woman brought a gun to a fireworks party. Now the woman, identified as Regan Miller, is facing four counts of terroristic threats and recklessly endangering another person in Schuylkill County. Miller is accused of pointing a gun at a group of people who were setting off fireworks in Rush Township. The woman who reported the 10:30 p.m. Saturday incident told police she was setting off fireworks with family members and friends when Miller came walking up to them and confronted them about the fireworks. One person said Miller originally held the gun with the barrel pointed at the ground, but she then raised the barrel and pointed it directly at the group, demanding they go back into the house. A preliminary hearing in the case is pending. (https://bit.ly/3guMbVS)

A North Hollywood Woman was arrested for assault after she hit her husband with a pork chop ….. FAKE NEWS