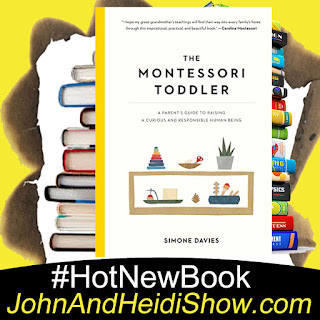 Simone Davies, author of THE MONTESSORI TODDLER: A Parent’s Guide to Raising a Curios and Responsible Human Being - https://amzn.to/323sDnt

National Cheer Up The Lonely Day

A Bloomberg survey found that 76% of Russian voters support a referendum that would allow Vladimir Putin to remain President for another sixteen years. (https://bit.ly/2AgyH0y)

About three hundred teens were exposed to the Coronavirus during a recent “pong fest” in Texas, during which several of them were awaiting test results, with some having since been found to be infected. The Fort Worth Star-Telegram reported that the high school students attended the party near Lakeway in Travis County on June 20th while a number of them had not yet received their COVID-19 test results. Several later found out they tested positive. Lakeway Mayor Sandy Cox predicted the mass gathering will lead to more cases in a state hit with record-breaking hospitalizations. “Unfortunately, our caseload is probably going to increase, and it’s because there was a very large party this past Saturday,” Cox said in a Facebook video. Everyone who attended the event has been instructed to self-quarantine for fourteen days. Additionally, anyone who has come into contact with those who went to the party must isolate themselves for two weeks. (https://bit.ly/2NVSiWZ)

Aquaman Jason Momoa is in negotiations to star as Frosty the Snowman in a live action/CG hybrid movie. The script will be co-written by a couple of guys who wrote the script for Elf, which stars Will Farrell.

The New York City Sheriff’s Office busted a group of people on Staten Island who were hauling illegal fireworks and an alligator. Ten people were arrested for hauling three alligators. (https://bit.ly/3fVwhDM)

The number of farmers now using drones at least weekly has surpassed 90 percent.

Illinois is one of the few states that’s coming out of COVID-19 pretty well. The state locked down in late March and its governor told residents to wear masks early on. Despite Illinois’ better-than-average situation, some residents aren’t happy and are planning — ready for this? — a Millions Unmasked March on July 25.

A Nebraska farmer draining a pond on his property for maintenance made a surprising and unusual discovery. Wynn Hall (of Exeter, Nebraska) said he started the process of draining the pond, which is used for pumping waters off his fields, and checked on it the following morning. Hall said he initially thought an object stuck in the mud was a household appliance. It turned out to be an ATM.

Several bars in Orlando, Florida have voluntarily closed after a spike in Coronavirus cases. (https://bit.ly/3dzNXmG)

Walmart has a lower acceptance rate than Harvard. Harvard might be hard to get into with a 4.5 percent admittance rate, but try this on for size: only 2.6 percent of Walmart applicants are accepted. How 'bout them apples? Now, we realize that this comparison isn't exactly flawless, but you have to admit that it's a fun fact.

A guy in Germany stole a bicycle, tossed it through a restaurant window, then went inside the restaurant and drank half a bottle of hot sauce. He told police he did it because he was thirsty.

A man was captured on video being removed from a Florida-bound flight at LaGuardia Airport Friday for not wearing a face mask. The tense standoff unfolded when a man, whose name was not known, “took his face covering off and refused to put it back on,” a spokesman for Spirit Airlines said. A video from inside the plane shows part of an exchange between a Port Authority cop and the man, in which the officer asks the passenger to get off the plane and the man argues with him. “I don’t want to force you, I’m asking you,” the cop can be heard saying while asking the man to get off the fight. A spokesman for the airline said the man eventually agreed to “deplane on his own instead of risking legal consequences.” (https://bit.ly/2VGMrcj)

Police are searching for an arson suspect in Northeast Philadelphia who accidentally set himself on fire. Authorities released surveillance video Tuesday of the incident from June 19th. It was around 12:42 a.m. when video shows the male suspect pouring a flammable liquid onto bushes next to a house. He then ignited the fire. The video shows flames shooting from the bushes and then from the suspect himself. He runs off and is then seen rolling on the ground. Police said the suspect got away in a car and was last seen east on Knights Road. Anyone with information should call Northeast Detective Division. (https://6abc.cm/31O67yX)

A Miramar Man was seen power-washing a roof while he was dressed as Spiderman… FLORIDA (https://bit.ly/2JzIzEk)