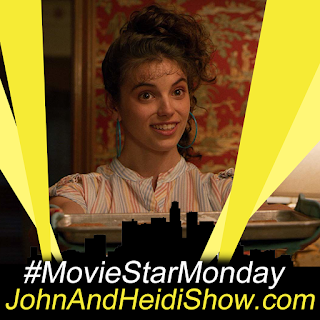 It's another #MovieStarMonday this time we chat with Francesca Reale, from Stranger Things and she's in a NEW coming of age FILM called Yes God Yes!

A new study found that gray hair is not a sign of old age in Chimpanzees.(https://bit.ly/2CQZQrI)

A boozy night of partying with seven dudes left one Brit with a whole lot more than king-size hangover. She woke up with seven tattoos on her thigh, too — and it was her idea. 22-year-old Megan Gerrard and six girlfriends had gone on a getaway a couple of years ago to the Spanish island of Magaluf when they met seven guys who hailed from the U.K. The fourteen went to the bars every night. On their last night, as the group passed a tattoo parlor, Gerrard jokingly volunteered to get everyone’s initials tattooed on her thigh to honor their chance meeting. “The boys dared me to,” said Gerrard, who has other tats. “My friends were begging me not to, but I was determined to get it done.” But, when Gerrard went back home, she discovered — on social media — that a few of the men had given fake initials. The women stayed in touch with the men for about four months — until their girlfriends found out. Today, Gerrard has a new tattoo to cover up her dare. (https://bit.ly/3fJXHgh)

A new report shows that Johnny Depp once presented Kate Moss with a diamond necklace he tucked between his butt cheeks. (https://pge.sx/39bTjnA)

The low budget horror movie “The Wretched” has been the surprise hit of the summer box office despite competition from re-released classics like “Titanic.” (https://bit.ly/39ajdbs)

Lindsay Lohan and the cast of “The Parent Trap” reunited last week for the film’s 22nd anniversary. (https://pge.sx/3eNDEMH)

A Kansas dog walked fifty miles to its old home in Missouri after its owner reported it missing last week. Cleo is a four-year-old Labrador retriever-border collie mix. She had a microchip that located her fifty miles away. (https://bit.ly/2CTTN5G)

A group of Dollar General Employees in Louisiana recognized a wanted murder suspect and locked him in the store while they called police. (https://bit.ly/3fKC0wC)

The Canadian Government will not allow the Toronto Blue Jays to play games in Canada this year. (https://bit.ly/2DW5oln)

Barcelona is back on lockdown after Coronavirus cases surged in the Spanish City last week. (https://yhoo.it/3jjNMAe)

Crayola is going to provide colorful masks for school kids.(https://bit.ly/3fKpOvF)

A video of a Sacramento Woman urinating on the floor of a Verizon store after Employees ordered her to wear a mask has gone viral. (https://cbsloc.al/3jnegRa)

The Queen is a total wedding crasher! If you invite the Queen of England to your wedding, even if you're not royalty, there's a chance she might show up anyway, as she did with one unsuspecting couple in Manchester in 2012.

A Florida man was injured in a bicycle crash with an iguana. Don’t worry — the injuries weren’t life-threatening, at least for the 62-year-old bicyclist. The man was riding on a path July 10th in Marathon, in the Keys, when the iguana darted in front of him. Keys residents are in a “constant battle” with the lizards, said Adam Linhardt, spokesman for the sheriff. “They’re just everywhere. Cars hit them a lot on the highway.” They can grow up to five feet long and have been known to fall from trees in cool weather. The sheriff’s office said this one got stuck between the front tire and the wheel fork. It caused the front tire to lock up, and the rider tumbled over the handlebars and onto the asphalt. The bicyclist was taken to Fishermen’s Hospital and given stitches to his head. He also had scrapes on his arms and a leg. (https://bit.ly/32DErxm)

A Florida woman has been charged with grand theft after she was allegedly caught on camera stealing orchids. 34-year-old Katrina Marie Brady was arrested by Coral Gables police for “stealing orchids that residents had placed on trees growing in the swale” in a residential neighborhood in the city, about five miles west of Miami. Brady was caught on camera when she allegedly stole about $4,000 worth of the floral beauties from trees in the Country Club Prado neighborhood, first on June 4th and again on June 19th. The flowers had been part of the neighborhood’s Orchid Project, which artist Ray Corral and Alina Meledina started about two or three years ago. Brady’s alleged crime isn’t the first-time orchid thievery has made headlines. Back in 1994, horticulturist John Laroche and some members of the Seminole Tribe were arrested for poaching rare orchids from the Fakahatchee Strand State Preserve.(https://bit.ly/2E3p4UD)

A Fort Walton Beach Dog Breeder was busted for drug possession after a chihuahua ate his duffel bag and tested positive for MARIJUANA ..... FAKE NEWS