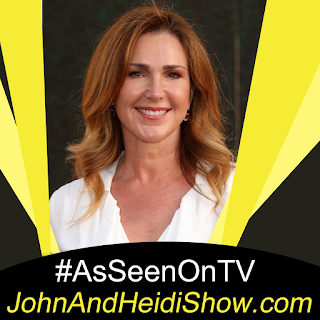 Today we visit with Peri Gilpin, best known for her role as Roz Doyle in the television series Frasier. She's staring in a new project called OLD GUY. This is is a short-form comedy series on ageism in media. Harry -- played by Roger Burton (Fargo, Shameless, The Tonight Show, Baskets) -- is going back to acting later in life, after raising his family and retiring from his traditional job. The show looks at his relationships with his wife (played by real-life spouse Gabrielle Burton) who is a writer and tries to advise him on the value of the jobs he takes, and with his agent, Peri Gilpin (Frasier), who is more interested in her commission than in what types of roles he plays. In each episode, Harry is challenged by playing an undeveloped character type, which humorously highlights different stereotypes about old age. OLD GUY will make you laugh, and make you think.

A recent study reveals that using vacuum cleaner bags to make do-it-yourself face masks is a highly efficient way to protect against contracting and spreading the Coronavirus. (https://nws.mx/38EuaBW)

According to an arrest affidavit, a Florida Man arrested for “running in the street unclothed” at 2:45 a.m. told police that he went for the naked jog yesterday after being “dared by a friend.” 58-year-old Konrad Tucker “did not seem bothered by the fact that he was nude while in public view,” a Pinellas Park Police Department officer reported. Tucker reportedly “could not advise where he was staying or who his ‘friend was.’” Additionally, Tucker “did not have access to any clothing.” Tucker, who is listed as a transient in arrest records, was charged with exposure of sexual organs, a misdemeanor. He is being held in lieu of $150 bond at the Pinellas County jail. His rap sheet includes convictions for disorderly intoxication, passing a bad check, resisting arrest, and driving with a suspended license. (https://bit.ly/2CIjWV0)

Johnny Depp’s famous exes, Winona Ryder and Vanessa Paradis, will not be called to testify at his divorce trial from Amber Heard because they have already submitted statements to the court saying he was never violent towards them.(https://pge.sx/2CJ0l7a)

Johnny Depp finished testifying in his divorce hearing with Amber Heard after twenty-three hours on the stand. (https://bit.ly/30oSPH5)

“Empire” star Bryshere Gray was arrested for Domestic Violence against his wife. (https://pge.sx/3hboC55)

The NFL has partnered with Oakley Sunglasses on a new face shield that will protect players from the Coronavirus when the season resumes.(https://bit.ly/2OrLh0m)

Dr. Anthony Fauci is on the cover of this month’s “In Style” Magazine.(http://dailym.ai/30fn3fm)

Rapper “Lil Pump” spent $25,000 on a GUCCI Bicycle in Miami. He was shopping at The Arsenale, which sells luxury goods including airplanes and submarines. (https://pge.sx/3j6QgC1)

Youtube star Jake Paul is in hot water after hosting a massive party at his California mansion despite the Coronavirus lockdown. (https://pge.sx/394vlef)

A report says the healthy properties of beer, when consumed in moderation, are a rich source of vitamins, fiber, minerals and antioxidants and that beer has a relatively low calorific value compared with many other alcoholic beverages. The report, commissioned by The Beer Academy — of course — aims to help people enjoy beer sensibly and says that when consumed in moderation, it’s one of the healthiest alcoholic drinks available.

A review of major studies found that one-third of the things the studies said were good for you turned out to actually be bad for you.

China censored the word for "censorship." I guess you can't be guilty of a crime if nobody can describe what it is!

A video of a chubby British cat that looks like a cow because of its markings has gone viral. The video got ten million views. (https://bit.ly/2CB1duD)

A Michigan man said he “snapped” during a nasty domestic spat with another man in a Summerfield parking lot on Wednesday. 26-year-old Pren Prekaj of Waterford, Michigan was charged with simple domestic battery after the incident. The victim told a Marion County sheriff’s deputy that he and Prekaj were having an argument when Prekaj struck him numerous times in the face while he was sitting in the driver’s seat of his vehicle. The victim said the altercation carried outside the vehicle, where Prekaj hit him numerous other times in the parking lot. Prekaj told a deputy that he “snapped,” and the altercation turned physical. He refused to provide any further information after being read his Miranda rights. Prekaj was taken to the Marion County Jail, where he was released Friday on $500 bond. (https://bit.ly/3ewJnGE)

Two stolen surveillance cameras helped Pinal County Sheriff’s deputies in Arizona identify and locate suspects in their theft from a mine in San Manuel. According to court records, 33-year-old Mindy K. Valencia and 42-year-old Mark A. Jimenez are both charged with burglary in the third degree for allegedly taking the cameras. According to sheriff’s reports, a representative from BHP Billiton mining company called the Pinal County Sheriff’s Office on July 3rd and reported the theft of two cameras from the San Manuel Mine. The cameras are used to monitor the property. Each camera has the ability to send photos to a cellphone and track its location via GPS. The GPS unit in one of the cameras reported its location at a home in San Manuel. Deputies sat near the residence and allegedly observed Jimenez walk back and forth between the home and a light brown truck. (https://bit.ly/2Ohtklg)

A Gainesville Man was arrested for cutting off his wife’s lover’s penis after he caught them together ….. FLORIDA (https://fxn.ws/2XM0Ve3)