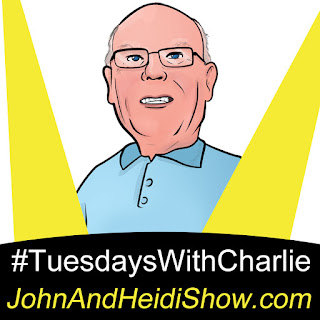 According to a new study, walking along the beach improves your mood and well-being. (https://bit.ly/2ZW7B7B)

An Ohio woman was arrested after breaking into a home Monday morning. A witness told local police they saw Cheyenne Ewing broke into a home and was acting bizarre. The owner of the home says Ewing entered through the backdoor, sat down in the living room couch, and was petting the family dog. She then washed the dishes and left the house. Moments later, local police received a call that matched the description of the burglar. Officials said she appeared to be on drugs, but Ewing told police she hasn't slept in two days. She was booked and charged with burglary. (https://bit.ly/2CHoY47)

A Star Wars animated series called “The Bad Batch” is coming to Disney Plus. (https://bit.ly/3gZnq4C)

Tamara Mowry has exited “The Real” after six seasons on the show. (https://pge.sx/2C2G6lf)

Matt Damon closed down an entire Brooklyn Heights block so a crane could lift trees onto the terrace of his new penthouse apartment.(https://pge.sx/2WnAqsQ)

Tesla’s stock is now higher than Google for the first time ever. (https://on.mktw.net/38V48uh)

Amazon has invented a shopping cart that recognizes the items you put in it and automatically charges your account for them, so there’s no need to check out when you’re done shopping. (https://bit.ly/2Ce5cgK)

Atlanta, Los Angeles, and San Diego will all be closing schools this fall. They say the average kid lost six months of academic gains during distance learning. Some of this is the setup and some of it is parents being too busy with their own jobs. (https://bit.ly/308Ma3B)

A Squirrel has tested positive for bubonic plague in Morrison, Colorado. (https://abcn.ws/3gZQEjH)

A statue of the Virgin Mary was set on fire outside of a Church in Dorchester, Massachusetts. (https://cbsloc.al/2CBclYk)

Qantas Airlines has banned international flights until March of next year.(http://dailym.ai/3gZFXxs)

The Post Office announced that mail could be delayed by a day or more under cost cutting measures being imposed to balance their books. (https://bit.ly/2Oz2JQC)

Barry Manilow didn't write his hit song "I Write the Songs." And before he recorded it, Barry didn't even think it was a particularly good song.

A British pub has installed an electric fence around its bar to enforce social distancing. (https://bbc.in/2OpblJE)

An ex-con whose rap sheet includes an assortment of felonies and state prison stays was arrested yesterday after allegedly battering a Florida convenience store clerk who asked him to put on a mask or leave the business. According to investigators, 49-year-old Treg Palmore was not wearing a mask when he entered a Marathon gas station food center. After an employee at the St. Petersburg business asked Palmore to “put on a mask or leave the store,” Palmore refused to depart. When worker Bola Rizk walked out from behind the counter and again asked Palmore to leave, “the defendant then struck the victim in the head and arm.” The incident was recorded by a store surveillance camera. Palmore fled the scene in a car, but was subsequently apprehended and charged with felony battery. (https://bit.ly/2CrUXFw)

A wedding photo shoot on a California beach ended in near disaster when the newlyweds were swept from a large rock by a giant wave. A witness captured video of the scene near the Montage Hotel in Laguna Beach when the couple, dressed in their wedding garb, were hit by a giant wave and swept into the water. The video shows a team of lifeguards hurrying to rescue the drenched, but uninjured, couple. The National Weather Service issued a warning this week of unusually high waves in the area and potential rip currents during the weekend. (https://bit.ly/2ZVyY1Y)

A Key West Man was arrested for shoplifting beer at Wal Mart in a Fake Police Uniform ….. FAKE NEWS