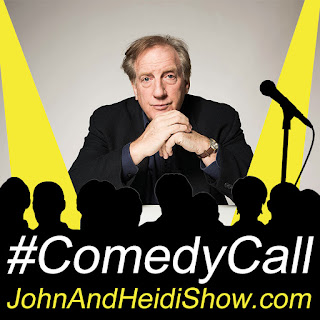 Today we visit with a very funny man for our #ComedyCall Alan Zweibel. Alan has had an amazing career – He started his career by selling jokes to old Borscht Belt comedians, became one of the first writers on Saturday Night Live where he had an extremely close friendship with Gilda Radner, co-created and produced the landmark TV show It’s Garry Shandling’s Show and collaborated with his life-long friend Billy Crystal on the Tony Award-winning show 700 Sundays. Now Alan has a NEW BOOK LAUGH LINES: My Life Helping Funny People Be Funnier - https://amzn.to/3jQwaMn

A survey reveals 80 percent of married respondents lie to their partners about spending. The survey found that most people lied about clothing and accessories, with food checking in as the second-most lied-about category. The top reason given for fibbing was that the significant other doesn’t need to know.

Collier County Sheriff’s Office in Florida arrested a 37-year-old man on drug trafficking charges Wednesday after they found heroin, fentanyl, and other drugs in his North Naples hotel room. Joshua James Pyles of East Naples is charged with fentanyl trafficking, heroin trafficking, cocaine trafficking, amphetamine trafficking, and possession of a controlled substance. CCSO says deputies pulled over Pyles outside the hotel he was staying at. During the stop, deputies determined that Pyles’ Florida driver’s license was not valid. A search of his hotel room turned up the following items: 166.1 grams of heroin, 60 grams of fentanyl, 414 grams of methamphetamine, 139 grams of cocaine, 24 grams of Adderall, 52.2 grams of testosterone, and .6 grams of LSD. Deputies placed Pyles under arrest and transported him to the Collier County jail. (https://bit.ly/2ZMggKY)

The coronavirus pandemic will be addressed during the forthcoming 17th season of Grey’s Anatomy. Filming of the series, which follows a group of surgeons in Seattle, Washington, is currently on hold due to the global health crisis but executive producer Krista Vernoff has revealed that when the show resumes production, the deadly disease will be addressed.

Internet Movie Database has ranked the 250 greatest movies of all time. At the top is 1994's The Shawshank Redemption.

A poll revealed that more than 25 percent of TV viewers watch during dinner.

The Cincinnati-area airport took a child’s stuffed animal for an impromptu tour before uniting the toy Dalmatian with its family in Florida. Airport employees found the toy left behind in the terminal and snapped photos of the lost traveler outfitted in a mask at the airport’s restaurants, on the runway, and with a K9 team. After sharing the pics on Facebook the stuffed animal was put on a plane to Florida.

A homeowner in the UK installed a new security system with motion-sensitive surveillance cameras that sends an alert to her phone. The other morning she got an alert that someone was inside her house. When the homeowner saw the surveillance images, she recognized the man who had broken in — and she also recognized his footwear. The homeowner says it was her mailman, and for some reason he’d broken in, put on a pair of her boots and walked around her house in them.

The FDA is warning consumers about hand sanitizer from Mexico which may contain a toxic ingredient. Don’t rub it on your hands or ingest it.

A new poll found that the 44 percent of baseball fans believe that winning the 2020 World Series will be less meaningful than winning a World Series in any other year.

Terrorist instructions were once replaced with cupcakes. Britain's Secret Intelligence Service once hacked an Al-Qaeda website and replaced the bomb instructions with a cupcake recipe.

A micro apartment with a shower and sink right next to the bed has gone on sale in Notting Hill in West London for just over $250,000. The 79-square foot apartment has a single bed, a shower, and a toilet cubicle and is available for just $253,630

Police allege that a Michigan woman who wanted her ex-husband murdered tried to hire a killer via the farcical web site “rentahitman.com.” According to investigators, 51-year-old Wendy Wein filled out a “service request form” on the site this month. The site describes itself as “your point & click” solution and boasts of “17,985 U.S. Based Field Operatives.” Site visitors are assured that Rent-A-Hitman is compliant with provisions of the 1964 Hitman Information Privacy & Protection Act (HIPPA). A recent update on Rent-A-Hitman noted that, “We are still open during the COVID-19 pandemic,” though “our Wuhan offices will be working on a reduced schedule.” The form Wein submitted to the web site identified her former spouse as the intended victim. This prompted Rent-A-Hitman’s operator to contact the Michigan State Police since it appeared Wein was serious about soliciting a murder. Wein was subsequently arrested and charged with murder solicitation and using a computer to commit a crime. (https://bit.ly/2WJ9FiQ)

A 12-year-old Delaware boy stole a pickup truck at a convenience store and led cops on a high-speed pursuit before crashing into a guardrail. The boy, whose name was not released, stole a red 2003 Ford Ranger Saturday after a 41-year-old man left his unlocked truck running in a parking lot at a Wawa in New Castle. The man — who went inside to use an ATM — spotted the boy driving off with his ride as he exited the store. The stolen truck was later located in a parking lot behind a nearby motel, where troopers tried to initiate a traffic stop, but the boy refused to pull over and drove off. Troopers pursued the truck for about two miles from where it was stolen before the boy lost control of the vehicle. The boy hopped out of the truck and was taken into custody following a brief foot pursuit. He was arraigned on charges including theft of a motor vehicle, resisting arrest, and driving without a valid license. (https://bit.ly/30D5aHx)

A Florida man was caught breaking into jail. During a visitation he tried to trade places with his twin brother. FAKE NEWS