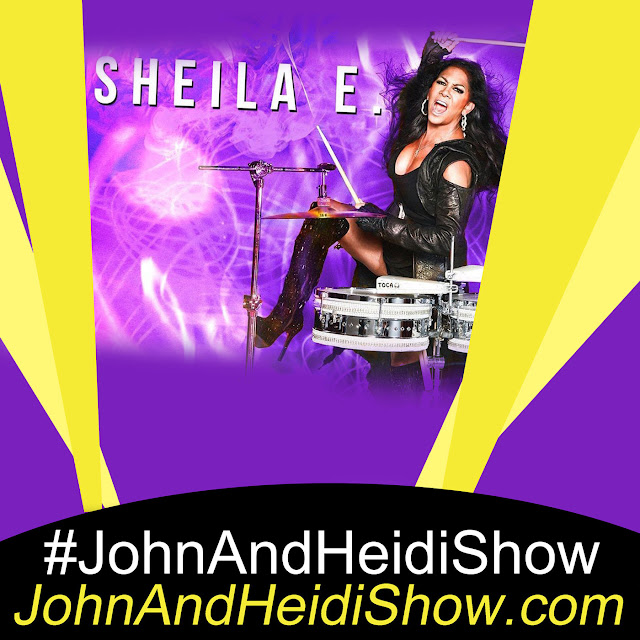 Today we visit with world renowned drummer and percussionist Sheila “E” Escovedo. She was recently nominated for a Emmy for Musical director for the Grammys salute to Prince special. Also, her Masterclass in drumming is out now, as well as her compelling memoir, THE BEAT OF MY OWN DRUM. (https://amzn.to/3fA8NDr) We will talk about all of this and much more! SheilaE.com

A survey by Homecure Plumbers found that one in six Americans have participated in work conference calls from the toilet. (https://bit.ly/30g3rZY)

A cat has escaped from a Sri Lankan prison after it was used to smuggle heroin and sim cards to inmates. The cat was caught after strolling into the rec yard with drugs taped to its body. A cat detained at Sri Lanka’s main prison while allegedly trying to smuggle in drugs and cell phone SIM cards has escaped. The feline was detected by jail intelligence officials on Saturday at the high-security Welikada Prison. Nearly two grams of heroin, two SIM cards and a memory chip were found in a small plastic bag tied around the cat’s neck. But it escaped on Sunday from a prison room where it was kept. (https://bit.ly/2PibQFV)

The typical household has 217 arguments each year about doing the dishes.

Scientists in Hungary accidentally created a new type of fish after two species managed to breed in captivity unbeknownst to them. (https://yhoo.it/3jSk0mo)

At this point, we know that air fryers can make just about anything. Donuts, chicken wings, and potatoes are all fair game — but trying something new can definitely be a little nerve-wracking without guidance. With TikTok user @airfryerguy’s account, that’s a non-issue, because he pretty much just puts random ingredients in his air fryer to see what happens. tiktok.com/@airfryerguy

One programmer had an unusual way of weaning himself off Facebook. Maneesh Sethi, a computer programmer, hired a woman (at $8 an hour) to slap him in the face every time he tried checking Facebook during working hours!

The Italian Government has served an eviction notice to a hermit who’s lived alone for thirty years on a deserted Italian Island, but the man says he plans to stay. (https://cnn.it/3hSdR7J)

A Florida couple was arrested for defying quarantine orders issued after they each tested positive for COVID-19. Cops busted 26-year-old Yohana Gonzalez and 24-year-old Jose Interian at their Key West apartment on a pair of misdemeanor charges. According to quarantine orders issued on July 21st by Florida’s Department of Health, Gonzalez and Interian were informed on July 15th that they had tested positive for the Coronavirus. Since the couple had roommates, they were instructed to wear face masks at home, self-isolate, and remain in their residence for a minimum of two weeks. The couple, however, ignored these directives. They failed to wear face masks at home, and “exposed all members of your household to COVID-19.” Additionally, the defendants--still symptomatic with the virus--went grocery shopping on July 20th. Gonzalez and Interian were each booked into the Monroe County jail Wednesday evening. Interian, who is listed as a self-employed barber in a police report, was released from custody early this morning on $1,000 bond. Gonzalez remains in custody. (https://bit.ly/2PuJtEF)

Rhode Island mistakenly sent more than 175 tax refund checks signed by Walt Disney and Mickey Mouse, rather than the state treasurer and controller. The Rhode Island Division of Taxation uses the signatures on test files, which were mistakenly printed on the real checks and sent out last Monday. “No other signature lines were printed besides the two,” said Jade Borgeson, chief of staff for the Rhode Island Department of Revenue, which includes the taxation division. Mickey Mouse is the cartoon character that was animator and producer Walt Disney’s first big hit. The checks were tax refunds for corporate, sales and tax credits mostly to businesses. The tax division has voided the checks and will issue new checks signed by General Treasurer Seth Magaziner and State Controller Peter Keenan within one week. (https://bit.ly/2XlQrzU)

A Pasco County Burglar told cops he didn’t break into a house, he was just going inside to look for his horse ….. FLORIDA (https://bit.ly/2PjWTmA)