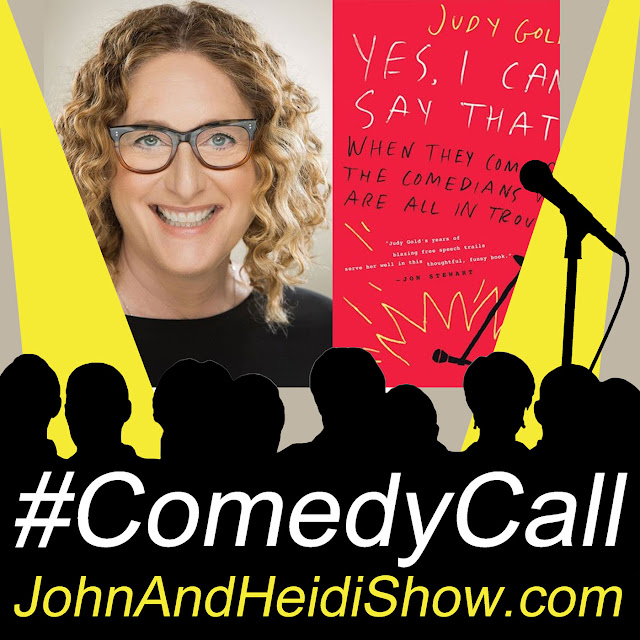 Today we have a #ComedyCall with a very funny comedian Judy Gold we'll talk about her new book, YES, I CAN SAY THAT: When They Come for the Comedians We Are All In Trouble

A survey by the Rand Corporation found that one in three Americans rely on news sources that they admit are untrustworthy. 41% of the respondents say the media has become less trustworthy. (https://bit.ly/3fneDbd)

A 45-year-old intoxicated Ohio driver was arrested at about 7:00 p.m. on July 12th after he crashed his vehicle into a guardrail and then urinated in front of police at the crash scene. When police arrived, smoke was spewing from the vehicle’s front end. The driver told police and paramedics that he was okay. He said he was exiting when another driver cut in front of him, causing him to lose control of and crash his vehicle. The driver smelled like alcohol and his eyes were red and glossy. He had difficulty walking to an ambulance for a checkup. He admitted drinking two beers. Police asked the driver to perform field sobriety tests, but he said he had to urinate first. The driver pulled down his shorts and started urinating toward vehicles. Police placed the driver in handcuffs, and as they did, the driver urinated all over himself. He tried to break free, but police pulled him toward the ambulance. (https://bit.ly/3hEzXdO)

Hollywood talent agency CAA has cut ninety agents due to the slow down from Coronavirus. (https://bit.ly/3jTIQSH)

“The Real Housewives of New York” are filming an in person reunion next week.

Kim Kardashian picked up Kanye West on a private Jet in Wyoming, sparking rumors they could be on a last ditch vacation to work things out.(http://dailym.ai/2Xq4rZt)

A New York couple got engaged after the guy popped the question as the NEOWISE comet flew over for the first time in 6,800 years. (https://bit.ly/3087NlD)

A Washington D.C. priest has tested positive for Coronavirus after urging his followers not to cower in fear. (https://bit.ly/3k9g8h2)

The NYPD could suspend a Female Cop who posted a TIK TOK video that shows her in a police top with hot pants and a pair of boots. (https://bit.ly/2Pewmai)

A Florida flight attendant smashed her husband’s guitar after she walked in on him with another women. (https://bit.ly/2DutDqw)

Arizona is leading a multi-state probe into why older iPhones are slowing and shutting down. Some people believe Apple slows phones on purpose to force Customers to buy new phones. (https://tmsnrt.rs/30eHHNU)

Florida police arrested a man who fired a gun inside a Miami hotel because people weren’t socially distancing. The man is facing a $1,000 fine.(https://bit.ly/2BIWvuK)

The U.S. Economy saw the biggest plunge in activity it has ever known in the second quarter, though it was not as bad as Economists predicted. (https://cnb.cx/33a05Jz)

We have musical roads. There's a highway in Lancaster, California, that plays the "William Tell Overture"—or the theme from "The Lone Ranger"—whenever cars drive over it at 55 mph. Yes, roads that sing!

Baghdad hit a temperature of 125 degrees Thursday, which is a record high for the desert city. (https://yhoo.it/3fcdfrR)

A naked man was arrested Sunday when state police said he fought with security guards at a drive-in theater in Butler County, Pennsylvania. Troopers were called to the Starlight Drive-In after 28-year-old Ronald Sito of Madison, Ohio, allegedly took off his clothes and became belligerent. He’s also accused of punching three people when he was asked to leave. When Troopers arrived and tried to take Sito into custody, state police said he became aggressive and resisted arrest. He was eventually arrested and taken to Butler Memorial Hospital to be checked out and is now facing charges. (https://bit.ly/2P99iK7)

A nude couple tangled with police after they were spotted strolling with their dog early Monday morning near their Massachusetts home. Responding to 9-1-1 calls about the naked duo, cops encountered the couple around 6:30 a.m. Investigators say that 32-year-old Mariel Kinney and 30-year-old Kevin Pinto were accompanied by their dog. When police questioned Kinney and Pinto about their state of undress, the pair allegedly became confrontational after answering some questions incoherently. After yelling and swearing at police, the couple sought to run away from officers, but they were quickly corralled. What followed, cops charge, was a violent scrum during which Kinney and Pinto struck Hopkinton Police Department officers. Kinney and Pinto were eventually restrained and placed into custody. They were each charged with indecent exposure, assault and battery on a police officer, and resisting arrest. (https://bit.ly/39KtyeG)

A Florida man bought a Porsche using a fake check he printed on his home computer. FLORIDA (https://bit.ly/2DfqgUO)

Adopted Teen Is Helping Senior Dogs Find Loving Homes, Just Like She Did