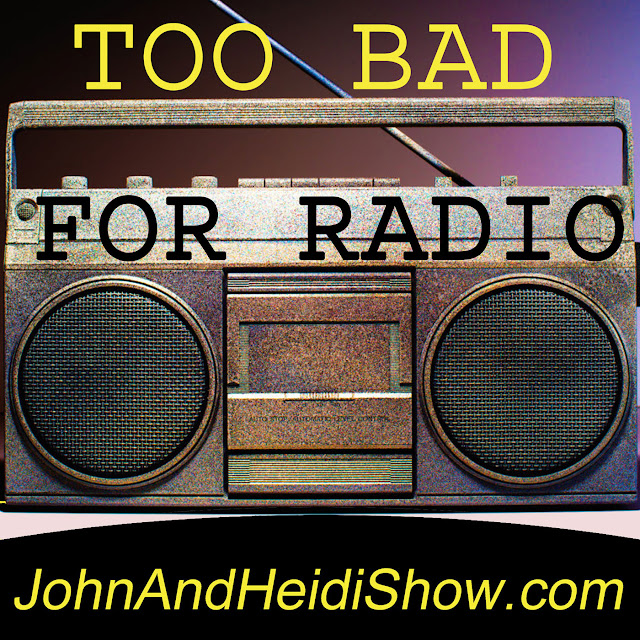 A friend of Jeffrey Epstein and Ghislain Maxwell claims the couple has videos of two high profile U.S. Politicians having sex with underage girls. (https://bit.ly/2Wc1aw6)

Two Florida strip clubs have been shuttered because of a lack of social distancing.(https://bit.ly/3gT14Sa)

Sex workers in Hamburg, Germany are protesting to reopen brothels in the city’s red light district after they were shut down due to the Coronavirus. (https://tmsnrt.rs/2WjsuZI)

A sex robot based on comedian Whitney Cummings has sold at auction for $100,000. Whitney actually brought this doll onstage during her Netflix Special. (https://bit.ly/30oRwYs)

Former Disney star Maitland Ward says working in pornography has given her opportunities that Hollywood never did. (https://bit.ly/2CHpz6B)

After slashing the tires on her boyfriend’s car, a Florida Woman struck the man and grabbed his scrotum “with such force that it removed the skin from the entirety of the victim’s right testicle.” Cops allege that 29-year-old Donika Shaniece Mays battered the victim yesterday afternoon during a confrontation in their Tampa-area apartment. Mays, who has the victim’s name tattooed on her arm, was arrested on a felony battery charge. According to an arrest affidavit, Mays and the victim had been arguing all morning before matters turned criminal. Mays and the man have been in a relationship for four years and have a two-year-old child. When asked by police about the dispute, Mays replied that she “had grabbed the victim’s testicles and had been in a physical altercation with him.” Mays was arrested and booked into the county jail, where she is being held in lieu of $7,650 bond. (https://bit.ly/3jdE9Tt)

When the Admiral Theatre in Chicago reopens Friday, the strip club will do so with a teeny bit of false advertising. Strictly speaking, the women won’t be “totally nude.” They’ll have a flimsy piece of material draped across their faces. Sam Cecola, the venue’s owner for the last 31 years, isn’t overly concerned. “The mask only covers her face, and many of the guests might not be looking at her face,” Cecola said. And one shouldn’t overlook the ability of the human mind to “fill in the blank with perfection,” he said. A visit to a strip club has always been something of an illusory experience — and even more so now with Coronavirus restrictions in place. Under Illinois’ Phase 4 of the reopening, which began in late June, dancers and customers must remain six-feet apart “at all times.” (https://bit.ly/2WjkHuI)

Adams County, Colorado strip club “Player’s Club” said it’s the only such establishment around that is required to keep its strippers twenty-five feet away from customers — and it’s suing to change that. “Plaintiff’s entertainers seek to create erotic art and such eroticism requires less distance than twenty-five feet to be effectively communicated to the patrons,” the club is arguing in court. Player’s Club filed its lawsuit on July 8th against the Colorado Department of Public Health and Environment and the Tri-County Health Department. It alleges the twenty-five-foot requirement violates the 1st and 14th Amendments to the U.S. Constitution as well as components of the Colorado State Constitution. The club said it reopened as a restaurant on July 6th, but the 25-foot requirement “makes it impossible for Plaintiff to earn enough revenue to sustain operations.” (https://bit.ly/3fVbn80)

Talk about public health advice not passing the smell test. A woman refused to wear a mask at a Panera Bread in California, claiming they’re useless to stop the spread of COVID-19 since people can still smell farts through pants. The footage, taken Monday at a Panera Bread in Chico, shows a white woman dubbed “Panera Karen” by some online holding her cellphone over her shoulder, appearing to try to film while hiding her face, while a man standing behind her chides her for not wearing a mask — which she’s holding in the same hand. Social media sleuths were trying to identify the woman early Wednesday after some Twitter users asked others to retweet the footage Tuesday until her identity is revealed. “Karen is ranting in Panera that masks won’t stop the virus because pants can’t stop farts,” one tweet read. “We have a scholar on our hands, folks.” (https://bit.ly/2WObPO9)

A Texas high school teacher’s aide is charged with having sex with three separate students — including one encounter in her home after she put her young child to bed. 24-year-old Ashlyn Faye Bell is being held on a $150,000 bond after being nabbed for the underaged trysts with the 16 and 17-year-old boys last year, arranging the hookups through SnapChat. Bell worked as an aide for the Texarkana Independent School District between August and May, and began reaching out to the teens outside of the classroom in November through the social media app — eventually hooking up with them at her home. She was arrested in June and charged with two counts of improper relationship between educator and student for her encounter with the 17-year-olds, and one count of sexual assault for her tryst with the 16-year-old. (https://bit.ly/3hx2KkN)

One man in London is taking his public mask wearing to his privates. 32-year-old Tim Shieff, a former “Ninja Warrior UK” contestant, startled Londoners when he took to Oxford Street wearing nothing but a face mask fashioned into a G-string that barely covered his privates, mocking a new law that has mandated mask-wearing in public. The Connecticut-born athlete is also a world champion free-runner and vegan YouTube sensation and known for stunts like admitting to eating meat despite railing against eating animals. Shieff’s publicity stunt is reminiscent of Chelsea Handler, who recently took to Instagram while working out wearing sneakers, leggings, and two face masks tied together and strategically placed to cover her chest. (https://bit.ly/39BemjY)

According to an arrest report, a businessman arrested for surreptitiously filming two naked women in an adjoining Florida hotel room told police that he frequently engaged in such video voyeurism as he traveled across the country for work. Robert Privette, a 49-year-old South Carolina resident, was busted last week following an incident at a DoubleTree resort in Key West. Charged with burglary and voyeurism, Privette is free on $30,000 bond in advance of his arraignment next week on the felony counts. Cops allege that Privette slid a tiny camera under the door separating his room from that of the victims, ages 24 and 27. He began recording the vacationing duo after hearing them return from the beach last Wednesday evening. During questioning, cops say he also admitted to “using his camera multiple times during his trips for work.” (https://bit.ly/2D6ICXt)

A “friendly bear” was castrated in Mexico after he sniffed a woman’s hair. The operation was performed on the male black bear after video circulated last month of him getting close to the woman at Chipinque Ecological Park in San Pedro Garza García. (https://bit.ly/33Od4B4)

A technologically challenged uncle in Scotland accidentally streamed Pornhub in front of his entire family while trying to play music through the TV. The red-faced relative was caught on viral Twitter video fumbling with his phone after the X-rated videos popped up on the screen — his family members screaming and giggling in the background. The screen showed a woman mid-sex act as the clumsy uncle desperately tried to close the browser. “Caught a f—ing belter! Oh my God!” the woman yells on the video, using Scottish slang for an incompetent person. The seventeen-second clip, originally posted in July, has received more than 6.4 million views. (https://bit.ly/2FbdVS1)

A group of social-media clout-seekers shocked nearby families by staging a shameless show on a beach in Belmar, New Jersey. The scene was something like “Snooki from the trashy reality TV series ‘Jersey Shore,’” according to the anonymous videographer who captured the exhibitionist incident. He uploaded footage to the Instagram group Influencers in the Wild — which shames badly behaved social-media stars for the enjoyment of 3.4 million followers. The clip has already racked up more than 50,000 likes. In the not-safe-for-work (NSFW) viral video, several bikini-clad females are shown gyrating their derrieres in full view of sunbathers while their male companion records the action. At one point, one of their friends films them motor-boating each other’s breasts. Needless to say, the “Jersey Shore” wannabes were swiftly shamed on Instagram.(https://bit.ly/321o2AF)

Exotic dancers weren’t the only ones being exposed in this Canadian strip club. A Toronto jiggle joint worker infected with COVID-19 may have exposed more than 500 people to the illness, health officials have warned. The Brass Rail Tavern employee tested positive for the coronavirus just days after the club was allowed to reopen with social distancing measures like mask requirements and social distancing. The employee, who was not identified, worked four shifts between Aug. 4 and Aug. 8, potentially infecting as many as 550 people, according to the Toronto Public Health Department. Anyone who frequented the spot, which is one of city’s best-known strip clubs, has been asked to monitor themselves for symptoms for fourteen days from their visit. Health officials said the bar has maintained a client log, and has reached out to anyone who left their name and contact information. (https://bit.ly/3h6DFxd)

Berlin's brothels were allowed to reopen last week after months of closure due to coronavirus restrictions -- but full-on sex is still off-limits. Instead, clients looking for sexual healing in the German capital will have to make do with erotic massages until regulations are further relaxed in September. And it's not just the clients who have been left frustrated by the partial easing of regulations. At the brothel where longtime sex worker Jana plies her trade, beds have been made, animal-print pillows fluffed, and fresh flowers placed in vases. But 49-year-old Jana is looking forward to next month when she can offer the full service again. “I prefer the sexual service, my clients do too,” she said. Sex work had been banned in Berlin since mid-March as part of efforts to control the spread of the Coronavirus. (https://bit.ly/2PUM1Mr)