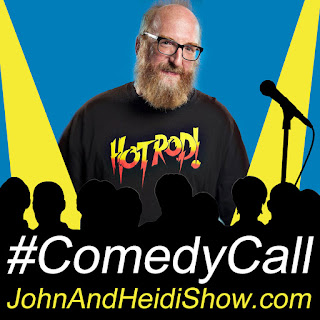 Today we have a #ComedyCall with the very funny Brian Posehn, most recently been seen on the popular Disney Plus show The Mandalorian, the acclaimed Netflix show Lady Dynamite, FX’s You’re The Worst and in his recurring roles on The Big Bang Theory and New Girl. He was one of the stars of Comedy Central's popular show The Sarah Silverman Program and one of the original members of the Comedians of Comedy. He’s recorded two half hour specials for Comedy Central, four comedy albums and three hour long specials. He has a NEW SPECIAL out tomorrow Brian Posehn Live: An Evening with Grandpa Metal streaming live on RushTix - the biggest virtual comedy club on the planet - Saturday, September 19 at 7:00pm PT.

Popping a Tylenol for that nagging headache may do more than just provide some pain relief. A new study finds that taking acetaminophen may also cause an individual to take greater risks than they would otherwise.(https://bit.ly/32aNll3)

A Palatka, Florida man wishes he wore a belt on Sunday. Gabriel Wise was placed in handcuffs, with his hands behind his back, after Putnam County Sheriff’s Office deputies arrested him Sunday morning. However, this is when the 37-year-old did not live up to his last name. Wise decided it was a good time to make a run for it, when his pants quickly fell down his legs, causing him to trip to the ground. Deputies were able to apprehend Wise quickly and found methamphetamine and pills on him. Wise was charged with burglary of an unoccupied vehicle, resisting an officer without violence, possession of methamphetamine, three counts of possession of a controlled substance without a prescription and two counts of drug equipment possession. (https://bit.ly/2GACUyS)

In a shocking announcement, the Kardashian clan revealed that their hit reality TV show, “Keeping Up with the Kardashians,” will be ending after fourteen years on the air. (https://pge.sx/2Zh8dVR)

Showbiz Insiders say Kris Jenner decided to end “Keeping Up With The Kardashians” after Kim Kardashian threatened to pull out of the show. (https://pge.sx/3mkg3YM)

Caitlyn Jenner had no idea “Keeping Up With the Kardashians” was coming to an end until her family members made the announcement earlier this week.

Kim Kardashian shot down rumors that she has six toes on her left foot. (https://eonli.ne/32f7kiB)

According to a recent report, more than seven hundred airline passengers have been banned from flying on U.S. airlines for refusing to wear masks. (https://bit.ly/2R6egbm)

An Austrian man named Josef Koeberl lasted more than two and a half hours in a glass box filled with ice cubes to break his own world record by thirty minutes. (https://fxn.ws/2R4Me02)

How does cycling or spinning compare with running or walking as an exercise for health or weight loss? An article in the New York Times reported that, in general, running burns more calories per minute than cycling. In a study, healthy, active men were assigned to run for an hour on one day and on another, to ride vigorously for the same amount of time. During both activities, the men’s blood levels of ghrelin, a hormone known to stimulate hunger, fell, compared to when they sat quietly. But running has a downside: Injuries are common. Biking, meanwhile, is gentler. Cycling is a nonweight bearing activity, so it is better for your knees and joints. Another option if biking and running aren’t on your fitness menu: walking. Research has show regular walkers can be very fit.

New York Governor Andrew Cuomo announced that restaurants can reopen for indoor dining at 25% capacity with restrictions by September 30th. The city’s restaurant industry, which employs 300,000 people at 25,000 establishments, has not been allowed to host customers indoors since the Coronavirus pandemic hit the five boroughs in March. (https://bit.ly/2ZnDXsv)

The Average American Opens a Fridge 22 times a day

A Sicilian mafia boss serving a life sentence for killing an investigator was so infuriated during a cell inspection inside his Rome prison that he bit off and swallowed a guard’s pinky finger. (https://bit.ly/2ZotPjr)

A man from Hawthorne, Florida is facing several charges after deputies say he stole mail from a woman while he was wearing only his underwear. Deputies responded to the call and they heard the bizarre story from the homeowner. The woman told authorities she came outside to find a man in his undergarments taking mail out of her mailbox. When she asked what he was doing, 64-year-old David Dunaway began yelling incoherently and attempted to attack her while she was in her vehicle. Dunaway swung at her through the car window, but only hit her with the stolen mail. The woman drove a short distance away to put space between the two, but Dunaway chased after her. Dunaway was eventually arrested and charged with burglary with assault or battery and resisting an officer without violence. (https://bit.ly/3ihQwNF)

Police allege that a supermarket manager was pelted with boxes of frozen pizza by a Pennsylvania man who refused to wear a mask inside the store when approached by the worker. Cops today announced that 35-year-old Patrick Steiner has been charged with harassment and disorderly conduct. According to the Logan Township Police Department, Steiner was inside the Giant Eagle on a Thursday afternoon when he refused to wear a mask when approached by the store manager. Steiner, investigators charge, then “threw boxes of frozen pizza at the manager and fled the store.” The victim provided cops with the license plate of Steiner’s car, which resulted in a traffic stop and the alleged pizza pelter’s arrest. Police did not indicate whether Steiner intended to purchase the pizzas or just retrieved them from a freezer for use as makeshift munitions. (https://bit.ly/3hs5kYT)

A Pensacola Doctor was arrested on indecency charges after cameras were discovered in the women’s room at his office ….. FAKE NEWS