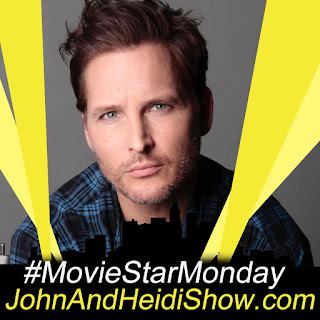 It's another #MovieStarMonday this time we visit with Peter Facinelli (Fastlane, Twilight, Nurse Jackie) we're going to visit about his NEW FILM called The Vanished available now - https://amzn.to/3lNTpId

National Neither Snow Nor Rain Day

A new study found that generosity will help you live longer. (https://cnn.it/3btglb3)

Teens across the country are partaking in a challenge that encourages each other to take as much allergy medicine as needed to hallucinate, with some TikTokers taking a dozen or more pills before trippin’ out. Johnson & Johnson is urging parents to be aware of the Benadryl TikTok after a 15-year-old girl died from it and put three Fort Worth, Texas teens in the hospital. Ingesting large doses of Benadryl can result in seizures and serious heart problems.

Beyonce and Jay-Z were seen sailing around the Hamptons with Twitter CEO Jack Dorsey on Tuesday. (https://pge.sx/3loHOyO)

Page Six has confirmed that Brad Pitt is dating German supermodel Nicole Poturalski after the couple was seen out to dinner. (https://pge.sx/32xKMss)

Bravo is open to bringing Dorinda Medley back to the Real Housewives of New York. (https://pge.sx/2ENI8GG)

Kevin Hart revealed that he tested positive for COVID-19 earlier this year. (https://pge.sx/2QqsAet)

Retail giant Amazon.com took a big leap toward delivering goods from the sky by becoming one of only a handful of companies certified by the U.S. government to operate as a drone airline. Amazon said Monday the Federal Aviation Administration designated Amazon Prime Air an “air carrier,” which allows the company to begin its first commercial deliveries in the U.S. under a trial program. Amazon and its competitors must still clear some regulatory and technical hurdles before small packages can routinely be dropped at people’s homes. UPS and Wing — a subsidiary of Alphabet Inc., which owns Google — have also received FAA approval.

Health Experts are predicting that a growing number of families will be forced to spend Thanksgiving over Zoom for safety reasons. (https://bit.ly/3lIvE4m)

Elon Musk is now richer than Mark Zuckerberg after Tesla’s stock surged by 475% this year. Musk is worth $111 billion and Zuckerberg is worth $110 billion. (https://bit.ly/32IXNzm)

The Head of the U.S. Food And Drug Administration says a Coronavirus Vaccine may be given emergency approval before the end of the Phase 3 Trial. (https://yhoo.it/3gLYrB0)

Restaurant goers were lucky to escape unhurt after a car crashed into an outdoor dining setup in New York City that had patrons seated in the street. Delizia 92 is a top notch Italian eatery. (https://bit.ly/2YxSQbc)

China has fired a missile into the South Sea in a warning to the United States after one of our spy planes entered a no-fly zone without permission. (https://bit.ly/3hBuWTZ)

A Detroit woman was declared dead and shipped off to a funeral home — only for shocked workers to discover she was still alive. The woman, who was not identified, was sent to the Funeral Home by her family after she was found unresponsive in her apartment and declared dead after Paramedics failed to resuscitate her. That’s when workers at the mortuary made the startling discovery — she was still breathing. “While it is our practice not to comment on open investigations, we can confirm that on Sunday, August 23rd, 2020, we received a call to pick up a Southfield woman who was deceased,” the funeral home said in a statement to ABC. “Upon arrival at the funeral home, our staff confirmed she was breathing and called EMS.” The woman was transported to Sinai-Grace Hospital in Detroit, which declined to release any information. (https://bit.ly/2YwpKcz)

A New Jersey farmer says some of the animals in his petting zoo were terrorized by a group of teens he says allegedly broke onto his property and abused them, including by putting lipstick on a miniature pony. Abma's Farm in Wyckoff is a beloved Bergen County mainstay and its market and petting zoo are a big draw. But Jimmy Abma says he'll have to keep the zoo closed on Monday as police investigate the trespassing and a veterinarian examines the animals. “All the gates were opened and the pens. A couple of the animals we couldn't even get close to, they were all skittish,” Abma said. He was tipped off to the disturbance after receiving a Snapchat photo of what appears to be a teenage girl riding one of his miniature donkeys. Abma says he turned in surveillance video and all the information he knows to police. The Wyckoff Police Department says it has opened an investigation in conjunction with Tyco Animal Control.(https://bit.ly/31pWtC0)

A Sarasota mom was arrested for indecent exposure after she mooned the principal at her daughter’s school to protest a clothing policy. FAKE NEWS