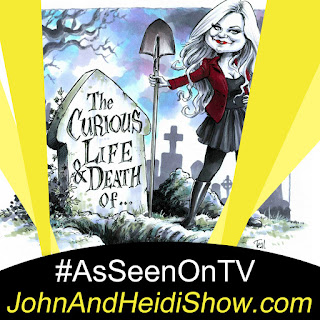 Today we visit with author and medical historian Dr. Lindsey Fitzharris. She will use science, tests, and demonstrations to shed new light on famous deaths on her new show that premiers this weekend on The Smithsonian Channel. The Curious Life and Death of...

A study by the American Academy of Medicine found that NINE in TEN college kids suffer from the fear of being without a smartphone. (https://bit.ly/3lwN9nQ)

A study by the Warsaw Zoo is giving medical marijuana to stressed out elephants to see if it helps. (https://yhoo.it/2QvLktc)

Bradley Cooper and Director Paul Thomas Anderson are filming a new movie on location in Los Angeles, making this the only production that’s not taking place on a secluded sound stage because of the pandemic. (https://bit.ly/34CdpHy)

A former production assistant on TMZ Live has filed a discrimination complaint against Harvey Levin and Warner Brothers that could lead to a lawsuit down the line. (https://bit.ly/32mdVXe)

Science tells us there’s a best time of day to nap and any time between 1PM and 2:30PM. Doctors used to think afternoon sleepiness was the result of a big lunch. But they’ve found that in the early afternoon there’s a dip in body temperature, which causes sleepiness.

The founder of the women’s online travel magazine, “A Broad Abroad,” wrote an article advising women who encounter polar bears to take their clothes off because bears are distracted easily and it will allow them to run away.(https://bit.ly/34QTSmO)

87-year-old Hiromu Inada is the World’s Oldest Ironman and he plans on competing into his 90’s. (https://yhoo.it/2Qwr9eA)

People with visible tattoos are more likely to be reckless and impulsive than those without ink. A study by economists (McMaster University) of more than 1,000 people looked at long-term decision making. The study employed a monetary game often used by researchers to assess long-term planning ability. Non-tattooed people made the wiser choices earlier in the game.

Crazy video captured the moment doctors pulled out a 4-foot-long snake from a Russian woman’s mouth after the serpent had slithered in while she slept outside. It was unclear if the snake was alive or how long it had been inside her before she was rushed to the hospital after feeling poorly.
https://www.youtube.com/watch?v=d7Cahn0umvQ&feature=youtu.be&t=5

In California you can't legally buy a mousetrap without having a hunting license.

The first Commercial Flight in history took off from Israel to the United Arab Emirates last week! Commercial Air Travel is a major step towards peace.(https://bit.ly/31Hrku6)

A German university is offering scholarships to three people who would have to do…“absolutely nothing.” University of Fine Arts in Hamburg is accepting applications for the “Scholarships for Doing Nothing” until September 15th. “The world we are living in is driven by the belief in success, in growth, in money. This thinking was leading us into the ecological crisis — and social injustice — we are living in. We wanted to turn that upside down — giving a grant not for the ‘best’ and for ‘doing a project,’ but for doing nothing,” Prof. Friedrich von Borries, creator of the scholarship project, told CNN. Applicants of any age and any nationality can apply for the $1,900 stipend. Questions from the application form: What do you want not to do? How long do you want not to do it for? Why is it important not to do this particular thing? Why are you the right person not to do it? (https://bit.ly/32HaTwS)

A Florida man with a “playboy” face tattoo was arrested for robbery on Thursday. According to the Highlands County Sheriff’s Office, 22-year-old Shane Jacob Ozzy Sears was arrested for robbing a man near the Circle K on Hammock Road in Sebring, Florida. A K-9 and deputy team tracked Sears from the crime scene and deputies found him at a home on Jacklin Avenue in Sebring. Sears was out on bond for an April arrest for felony battery, felony domestic battery, aggravated battery, and possession of a firearm by a convicted felon, according to the sheriff’s office. He was accompanied by a man who has not yet been arrested. (https://bit.ly/2EPkBoG)

A Weston woman was arrested for driving 70-mph with her boyfriend clinging to the hood of the car and talking on the phone. FLORIDA (https://goo.gl/kLRV7h)