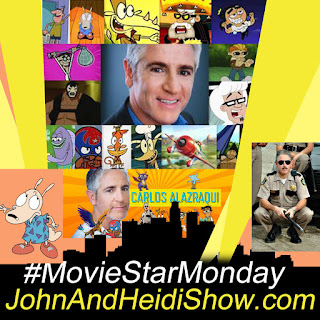 It's a #MovieStarMondayas we visit with Carlos Alazraqui. The voice of Rocko on Rocko's Modern Life, the father on Casagrandes, and so many more hit family shows! He also plays Deputy Garcia on Reno 911.

EXAMPLES OF HIS VOICES https://www.youtube.com/watch?v=XXE9xrxLTnc

A study by the Northwestern School of Medicine found that scientists have located the portion of the male brain that controls sexual desire.(https://bit.ly/32s1SJe)

At 12:35 a.m. Sept. 9th, an Ohio woman notified police that her daughter had pulled a gun on her, then fled her family’s home in her SUV. In addition to the woman, her husband and son were in the home at the time. The woman told officers that her daughter and her three young sons had come to visit her that evening. Both the mother and daughter were drinking alcohol while talking about a recently deceased family member. The two then argued, and the argument, briefly, turned physical. The mother’s husband and son broke up the fight. The daughter then left the house with her children, put her sons into her SUV, then took a gun from the SUV and approached the home’s porch. She pointed the gun at her mother and said she was going to shoot her because she was “sick of her.” Police went to the daughter’s house and spoke with her father, who said she was not home. Police are searching for the daughter on charges of domestic violence and aggravated menacing. (https://bit.ly/35z8Q18)

Miley Cyrus wore a, quote, “daring dress” to perform on “The Tonight Show.” She performed for seven minutes. (https://pge.sx/2ZCcRhq)

A YouTuber filmed himself pooping in the driveway of Nancy Pelosi’s San Francisco residence. (https://bit.ly/3c4uU4X)

Fox News has reported that San Francisco salon owner Erica Kious said she is closing her business after the infamous visit by House Speaker Nancy Pelosi. She said, “I started to just get a ton of phone calls, text messages, emails, all my Yelp reviews … saying that they hope I go under and that I fail.” (https://bit.ly/3k8bizw)

Pepsi is developing a new drink that’s made with chemicals that help people relax and fall asleep. (https://bit.ly/3mjlCXD)

It's illegal in Georgia to eat fried chicken with a fork

According to media reports, during a 2016 interview imprisoned Mexican drug kingpin Joaquín “El Chapo” Guzman said he fathered twenty-three children and that women are his only addiction. (https://fxn.ws/2GHsddW)

Things got a little nutty when Tom and Kristin Cressotti, alongside daughter, Ella, hosted a backyard gender reveal. In a video posted to Facebook, the Western Massachusetts couple wielded pre-loaded smoke bombs to announce the gender of their new baby. The Cressottis said they chose smoke bombs because they are supposed to go 30 feet in the air to create a unique visual. “When my wife handed it to me, I asked her if it was the right way,” Tom Cressotti told TODAY Parents. “She assured me it was and even told me to hold it a little lower like the packaging shows.” As friends and family counted down, the duo released the blue smoke — signaling a baby boy — only to realize the powder cannons had been held upside down, releasing the “bomb” directly into Tom’s genitals. Covered in blue smoke, Tom struggled to celebrate the news as he laid on the ground clutching below the waist. (https://on.today.com/3iE6YYv)

A middle-aged British motorcyclist was filmed racing past an unmarked police car at an estimated 100-mph — while pulling a wheelie. Dashcam footage showed the biker pulling the death-defying stunt as it zipped past the unmarked car on a highway with another equally speedy motorcyclist trailing him with both wheels on the road. 51-year-old Lee Embleton pleaded guilty to dangerous driving at Newcastle Crown Court over the stunt in June 2018 during which police estimate he was doing at least 100-mph. He has been handed an interim driving ban — and an immediate forfeiture order was made for officers to seize his Yamaha bike — before his sentencing set for November 13th. “Not only did he put his own life in danger on the afternoon in question, but also every other road user. His actions could easily have had fatal consequences and I sincerely hope he realizes the severity of his actions,” Chief Inspector Sam Rennison of Northumbria Police said to reporters. (https://bit.ly/32yyrFC)

A St. Petersburg man was busted for DUI on a hoverboard after he rode pantless through a pedestrian mall ….. FAKE NEWS