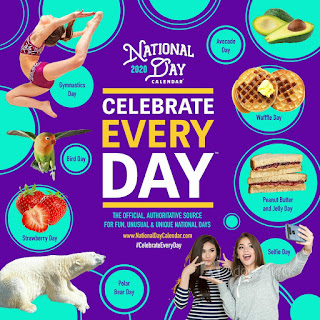 Today we talk with Marlo Anderson from NationalDayCalendar.com

A survey found that half of New Yorkers think the city is headed in the wrong direction. (https://bit.ly/3gUbHUg)

A 19-year-old Floridian arrested after she pulled her pants down and urinated in front of a cop car made matters worse on her way to jail when she allegedly offered to perform a sex act on a patrolman in exchange for her Juul e-cigarette. Madison Ann Bryant was charged Sunday with disorderly intoxication, a misdemeanor, and offering a bribe to a public servant, a felony. She was released that evening from the Lake County jail after posting $3,000 bond. Cops say that while her 22-year-old boyfriend was getting busted for drunk driving, Bryant “pulled her pants down and urinated directly in front of” a squad car.” After being arrested for disorderedly intoxication, she offered the officer oral sex in exchange for her Juul e-cigarette, which he had confiscated. (https://bit.ly/3bkGbh0)

Activists are calling for a boycott of Disney’s live-action “Mulan” remake, citing a social media post from the lead actress in support of Hong Kong police. (https://bloom.bg/3i9Fs5c)

Actor Bradley Cooper recently took a shot at The Oscars, saying that the awards season is “meaningless” and “devoid of artistic creation.” (https://fxn.ws/3h7eUQq)

Britney Spears says her conservator arrangement was voluntary and that she wanted someone to control her finances. (https://pge.sx/2GvYlRX)

Kanye West told Nick Cannon’s podcast that God made him storm the stage and interrupt Taylor Swift at the MTV VMA’s. (https://bit.ly/34Zn9vL)

A video of two women getting into a wild fistfight at New York’s La Guardia Airport has gone viral. (https://bit.ly/2GnqzhA)

“Burning Man” will take place online this year because of the Coronavirus. (https://bit.ly/2QUdaiR)

Fraudulent puppy sales are becoming one of the biggest online scams during lockdown, with people paying websites for dogs that never actually come. (https://on.wsj.com/2GtezuY)

Fire Officials have announced that a smoke generating pyrotechnic device used at a gender-reveal party ignited one of the twenty-three major fires burning in California. (https://fxn.ws/2ZeoPOa)

Research shows that a high-fat diet changes the brain, making you want to eat more.

Four out of five adults claim to be good spellers. Females are the most confident (87 percent) in their spelling abilities.

North Korean state media released photos of leader Kim Jong Un paying a visit to coastal areas hit by a typhoon. The appearance followed allegations that Kim had been in a coma. (https://bit.ly/3h6Lm5q)

A woman in Thailand claimed she accidentally dyed her white cat bright yellow while treating a fungal infection on its legs. Thammapa Supamas wrote on Facebook that she rubbed turmeric on the infected area. Turmeric is known for its vibrant yellow color and is used in food and as a natural dye. It didn’t take long for her cat to end up yellow. Photos of the yellow cat were so popular that Supamas made a Facebook page for her pet that quickly gained thousands of followers. She explained that the infection itself seemed to be going away after the turmeric treatment, but the yellow color was fading more slowly. Turmeric is known for its anti-inflammatory properties. However, that doesn’t mean it’s a good idea to use on pets. Dr. Kurt Venator, chief veterinary officer at Purina, told People that the effects of turmeric on pets haven’t been studied much. (https://fxn.ws/2Z0Kedv)

This overheated woman couldn’t wait to get off her flight in Russia – so she decided to cool off by winging it. When the Ukraine International Airlines flight from Turkey landed in Kiev this week, the mom of two opened the emergency exit and hopped onto its wing to take a refreshing stroll. After cooling off, she stepped back into the Boeing 737 and rejoined her family. Another passenger told reporters that almost everyone had gotten off the plane before the woman pulled the stunt. “She walked almost all the way from the tail to the emergency exit row, opened the door, and went out,” the passenger said. “By that time her two children were outside the plane and standing right next to me. They were surprised, saying, ‘That’s our mum!’” The passenger was blacklisted for gross violation of aviation safety rules and behavior on board. The carrier also demanded that she be punished with “an exceptionally high financial penalty.” (https://bit.ly/3jy7ur8)

He Prayed For Help. It Arrived In The Form Of Priests On A Floating Tiki Bar
https://www.sunnyskyz.com/good-news/3941/He-Prayed-For-Help-It-Arrived-In-The-Form-Of-Priests-On-A-Floating-Tiki-Bar