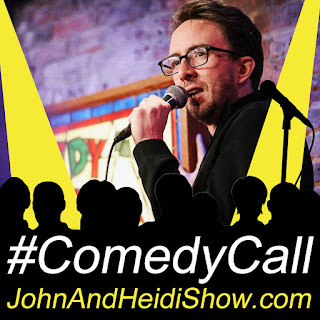 Today we have a #ComedyCall with the very funny Joe List. He has a new one-hour comedy special “Joe List: I Hate Myself” now available for streaming on Comedy Central’s Stand-Up YouTube Channel at https://www.youtube.com/watch?v=odtAJ2kPdqc

A new study found that the New Guinea Singing Dog is not extinct as scientists once believed. The dog is basically a dingo that makes a howling sound. (https://bit.ly/3jzgyMr)

Police say a New Mexico man is in custody after he tried to burn down a Walmart in Truth or Consequences early Sunday. Officers arrested Devon Schinagel of Elephant Butte after he poured lighter fluid around the store then crashed through the front doors with his vehicle. Two employees contacted police about the incident just after midnight. Those workers did not come into contact with him. Schinagel is being held in Luna County. He's facing several felony charges from arson to burglary to property damage. Police say he has a criminal history within Sierra County and Truth or Consequences. In 2011, he faced charges for driving while intoxicated and battery on a police officer. In 2016, he was arrested on two counts of aggravated assault with a deadly weapon on someone he lived with. A city spokesperson said no one was hurt during the incident and the store has since reopened. (https://bit.ly/34w7F1X)

The unscripted reunion special celebrating the 30th anniversary of The Fresh Prince of Bel-Air will record on September 10, exactly three decades to the day of Fresh Prince’s premiere on NBC. The special featuring Will Smith, Tatyana Ali, Karyn Parsons, Joseph Marcell, Daphne Maxwell Reid and Alfonso Ribeiro — as well as the recurring DJ Jazzy Jeff — will be released on HBO Max around Thanksgiving. HBO Max recently became Fresh Prince’s streaming home. The sitcom ran for six seasons and 148 episodes.

While actor Alden Ehrenreich did his best to be as Harrison Ford-like as humanly possible for Solo: A Star Wars Story, one can’t watch the movie and not wish there’s been a way to time travel the film crew back a few decades and use the real Harrison Ford to play Han Solo. But that’s what computers are for. A new deepfake of parts of Solo has been shared with the world and, well, maybe one day the entire film will be recut with Ford in the lead role. https://www.youtube.com/watch?v=bC3uH4Xw4Xo&feature=youtu.be

Maybe you kick off your shoes at home because you don’t want to track dirt across clean carpets or floors, or maybe it’s just a relief to shed them. But if you regularly take them off mainly because you’re worried about harmful bacteria from the outside getting inside and making you sick, you can probably relax. Those concerns are overblown, according to experts, who say that more pressing health risks are often overlooked. Charles P. Gerba, a professor and microbiologist at the University of Arizona, studied how many and which kinds of bacteria linger on the bottom of shoes. The study indicated that bacteria can be tracked by shoes over a long distance into your home or personal space. But in the hierarchy of potential health hazards at home, bacteria-caked shoes rank comparatively low, and there are more important considerations. Is anyone in the house sick? Are there frogs, turtles or snakes nearby, which can carry salmonella? Is food being stored and prepared properly? Sponges, which retain water and food particles, are a “cesspool” of bacteria.

Scientists have discovered why flies are so hard to swat, and in doing so they also discovered the prefect way to swat a fly. Experts from the California Institute of Technology say a fly’s brain plans the best way to avoid a good swatting within 100 milliseconds of spotting you looming towards it with a rolled up newspaper. Within that time the fly also places its legs in an optimal position to hop out of the way in the opposite direction, leaving you swatting the table. The research also suggests an optimal method for actually swatting a fly: “It is best not to swat at the fly’s starting position, but rather to aim a bit forward of that to anticipate where the fly is going to jump when it first sees your swatter.”

It may come as news to new parents but a study found that mothers do get enough sleep in their babies’ first few months — it’s just not good quality. Researchers (West Virginia University) followed a group of new mothers and found, on average, the women got just over 7 hours of sleep a night during their babies’ first four months. That amount is generally what is recommended for adults and, based on past studies, more than the average American gets. But the study found that sleep is also frequently disrupted, with the women typically being awake for a total of two hours a night — which was worrying as sleep problems and exhaustion may contribute to postpartum depression and impact work performance.

According to the latest survey 42 percent of smartphone users check it more than fifty times a day. Also: The share of Americans that own smartphones is now 82 percent, up from just 33 percent in 2010. Also, 52 percent of American homes no longer have a landline.

A small airport in China was forced to close for ten hours after thieves stole two-thirds of its runway lights. Airport maintenance crews were stunned to find over 60 landing lights missing from the runway after pilots complained.

Lane Rodrigue was playing golf with friends at the Idlewild Golf Course in Patterson, Louisiana, on Monday when a monster alligator walked right on to the course and snatched up his ball. Lane’s friends were shocked — and jokingly debated “playing it where it lies” — but ultimately decided to let the gator keep it as a souvenir. No one got hurt. The gator is fine.

Authorities in Walton County say Casey William Kelley purchased a Porsche 911 Turbo from a dealership in Destin for nearly $140,000. “Purchased,” however, may have been too loose a word to describe the transaction, as the $139,203.05 cashier's check that the 42-year-old Wewahitchka man presented bounced, and the car was reported stolen. Kelley was arrested and told authorities that the check hadn't actually come from a bank, but was simply printed off of his home computer. Before he was nabbed, Kelley made one other stop: to a Miramar Beach jewelry store, where he ponied up another phony check in the amount of $61,521, to pay for three Rolex watches. Kelley now faces charges of grand theft of a motor vehicle and uttering a false banknote. (https://bit.ly/3gGKODr)

A dog accidentally put a car in drive and crashed it into a Daytona liquor store after his owner left him inside the running vehicle ….. FAKE NEWS