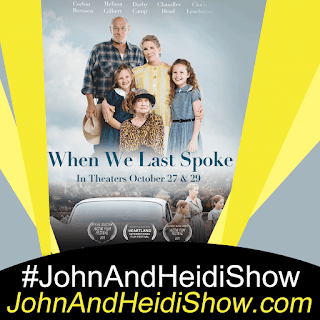 Today we speak with Marci Henna about her novel When We Last Spoke. The well-received novel turned motion picture hits the big screen for an exclusive two night showing October 27 and 29. WHEN WE LAST SPOKE features an all-star cast including Melissa Gilbert (“Little House on the Prairie”), Corbin Bernsen (“Psych,” “L.A. Law”), Darby Camp (“Big Little Lies,” THE CHRISTMAS CHRONICLES), Chandler Head (THE GLASS CASTLE) and Academy award-winning actress, Cloris Leachman (I CAN ONLY IMAGINE, THE LAST PICTURE SHOW). https://amzn.to/3jfyzQh

A study says Americans throw away 103 pounds of spoiled food from their fridge every single year. That adds up to 6,180 pounds over the average adult lifetime.

… The most commonly wasted foods:

48-year-old Florida Man George Vacherlon was already shackled when cops took him into custody early Monday morning following a traffic stop in Eustis, a city about forty miles from Orlando. Vacherlon, an ex-con whose rap sheet includes multiple felony convictions, was charged with possession of ammunition by a convicted felon after cops found a Remington .22 caliber round inside his Jeep’s driver door pocket. Vacherlon’s male passenger, with whom he shares a home address, was busted on drug charges after officers found methamphetamine and used syringes in his bag. According to a Eustis Police Department report, Vacherlon, who is locked up on $10,000 bond, was “placed in handcuffs, that were double-locked and checked for proper fit.” (https://bit.ly/3hFiXE5)

Dennis Quaid is being trashed on Twitter for starring in a new public service campaign that praises President Trump’s handling of the Coronavirus. Garth Brooks is also in the campaign. (https://bit.ly/2HuL64c)

Ben Affleck is moving his girlfriend Ana de Armas into his $20 million dollar “Dad Pad” in the Pacific Palisades. Ben was forced to buy a new place after he split his old house with Jennifer Garner. (https://pge.sx/2S2eyjY)

Amazon has added a “mail box sensor” to its RING home monitoring system that will tell you if your mail is being tampered with. (https://cnet.co/3mZme4M)

Estee Lauder is paying NASA $128,000 to photograph their newest moisturizer aboard the International Space Station. (https://bit.ly/309hOi4)

Kraft is offering pumpkin spiced macaroni and cheese for the fall season. (https://bit.ly/3cMVwYN)

Hall of Fame Quarterback Joe Montana stopped a female intruder from kidnapping his grandkid inside his California house. (https://bit.ly/335beLk)

Wives, your husband is pretty much OK with all of your friends. According to a new survey:

As we get older, our lists of things we want to do before we die becomes more important. Those over the age of 45 want to: See the Northern Lights; travel first class; buy a vacation home; go on a cruise; research their family tree; go on safari; learn a new language; ride in a hot air balloon; learn to play an instrument; write a novel; swim with dolphins; be an extra on a TV show/film; go to Asia; walk a daughter down the aisle; learn to paint; learn to fly a plane; sky-dive; learn photography; revisit my honeymoon destination; get a tattoo; go to a nude beach; run a marathon; get a cat; ride a motorcycle; bungee jump; go skiing; learn to bake/cook; sing in public; learn a new sport.

Whats is the most discarded item in the world. I bet you’re thinking old tech, like mobile phones. Or paper cups (we drink a lot of coffee). It’s actually cigarette butts. Something like 4.5 trillion are tossed each year around the world.

In China, officers arrested a man after a break-in. When they went through his confiscated phone they found photos of another guy posing with money. Turns out the man police had in custody had recently done a break-in with another guy who’d insisted his photo be taken with their loot. The man in custody told cops, “It was our first robbery together. He was so thrilled he wanted to show off.”

The Chinese Air Force released a video that shows a simulated attack on the U.S. Air Base in Guam. (https://reut.rs/3iUcuXd)

A Michigan daredevil launched his car over a rising drawbridge “Dukes of Hazzard”-style while he was allegedly high on whippets. 26-year-old Miguel Gomez of Allen Park, was busted on new charges Monday for pulling the wild stunt on the Fort Street bridge in Detroit. Police said Gomez was waiting to cross the bridge just as it was opening up around 7:00 p.m. Wednesday, stepped on the gas, and accelerated the car through the security gate and into the air to the other side. “It was actually like the ‘Dukes of Hazzard.’ He made it across,” said a police dispatcher, comparing the scene to the 1970s television show in which a Dodge Charger would often take flying leaps to escape from law enforcement. Gomez survived the dangerous stunt, but he wrecked his car, damaged the bridge, and ended up in jail. He was suspected of being under the influence of whippets, cans of nitrous oxide, which were found inside his car. He faces charges including malicious destruction of property and reckless driving for taking the terrifying leap. (https://bit.ly/3iSREHT)

Police in England responded to an early morning call from a man who became trapped in a pair of handcuffs in an apparent case of romance gone awry. The Greater Manchester Police's Rochdale station said officers responded to a home at 4:30 a.m. Friday to help a couple having difficulty with a pair of handcuffs. “Male phoned requesting help as his girlfriend had locked him in some handcuffs and they couldn't now find the key,” the department's tweet said. “Wanted police as he feared the fire brigade would cut them and they were expensive.” Police said the man was “released” from the cuffs, but the department did not say whether the expensive restraints were damaged in the rescue. (https://bit.ly/3mBNvKJ)

A listing for a condo in Florida is going viral after pictures were posted online showing off an unusual aspect of the decor: the walls and ceilings of the home are covered in Budweiser beer cans. Realtor Kristen Kearney said she initially didn’t know what to expect when she received a call about listing the condo (in Lake Worth): “They warned me that the home was wallpapered in beer cans and I thought to myself, ‘Well, I wonder where in the world they found beer-can wallpaper.'” Kearney said the cans cover every wall and ceiling of the home, except for the bathroom. Kearney said the condo’s former owner, who is now deceased, was a lifelong fan of the Anheuser-Busch beer.
https://www.realtor.com/realestateandhomes-detail/4707-Lucerne-Lakes-Blvd-E-Apt-102_Lake-Worth_FL_33467_M68724-63483#photo3