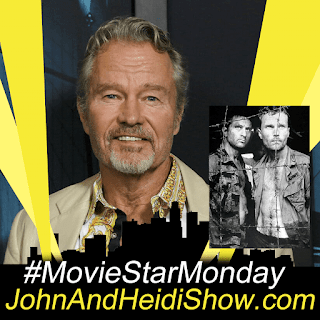 It's a #MovieStarMonday as we visit with living Hollywoon legend John Savage. Deer Hunter, The Thin Red Line, Spike Lee's Do The Right Thing and over 200 other films, TV shows and more. He's in a NEW prime time series "Seal Team" on CBS all-access. ..all episodes now streaming. https://www.cbs.com/shows/seal-team/

A Wall Street Journal survey found that many Americans who work remotely have moved to other parts of the country to experiment with a different lifestyle for the time being. (https://on.wsj.com/2EIOEPu)

A new study found that male baboons get major health benefits from having platonic friendships with female baboons. The study tracked the health of male baboons who spent time with males as well as females. (https://bit.ly/3czvtUJ)

A man stopped by sheriff’s deputies in the Florida Keys for driving a stolen construction vehicle on U.S. 1 told them that he was operating the machinery because, “I like it.” 35-year-old Christopher Paul Hawkins was driving heavy machinery with no lights on when a Monroe County Sheriff’s Deputy pulled him over at 1:35 a.m. Wednesday southbound on U.S. 1. near Mile Marker 30. When the deputy approached the driver inside the construction vehicle, he recognized Hawkins as someone he had seen walking just moments before along the same road. According to the deputy, Hawkins had trouble standing and appeared to be intoxicated. He was charged with driving while under the influence, driving while under the influence with property damage, driving with a suspended license, and criminal mischief. (https://bit.ly/342mreZ)

Pierce Brosnan is selling his “James Bond Inspired” Malibu Mansion for $100 million dollars. The house sits on an acre of ocean-front land and is surrounded by other mansions. Brosnan modeled the beach-front mansion after a home he stayed in while filming “Tomorrow Never Dies” in Thailand. (https://bit.ly/30iXFpW)

Guys who gossip outnumber gossip girls two to one, according to research. And 80 percent of guys’ conversations are spent on discussing other people and their habits. The difference between what guys and women gossip about? The study found that while guys love exchanging juicy tidbits of personal info, only about 5 percent of their gossip is malicious.

Scientists (at Cornell University) definitively proved that overhearing a cellphone conversation is more distracting than overhearing a normal conversation. It’s because you only hear a “half-a-logue,” which is less predictable and therefore requires more mental power to analyze and ignore.

John Chandler is the creator of the World’s Best Lasagna, an artery-clogging tower of sweet Italian sausage, ground beef and ricotta cheese that has reigned as one of the most popular recipes on AllRecipes.com for many years. It has earned over 12,000 ratings. In 2001, his then-girlfriend, an avid AllRecipes user, urged him to put the lasagna recipe online, where others could make and review it. The dish quickly earned a string of five-star reviews and climbed to the top of AllRecipes’ rankings. https://www.allrecipes.com/recipe/23600/worlds-best-lasagna/?radio

A survey found many of you have no idea where your food comes from. In fact, 2 percent of you think bacon comes from a cow. 10 percent think tofu is a type of mushroom. 20 percent mistakenly think veal comes from a deer — rather than a calf.

According to a survey, half of fathers either continue to sleep or pretend to be asleep when their babies cry during the night. In addition to the 52 percent of dads who do not get up with their wailing children, an added 22 percent only get up after their partner has already crawled out of bed. The lack of support leaves six in 10 mothers feeling bitter toward their partners. Restless nights also mean 86 percent of moms prefer sleep to sex.

According to a study, giraffes hum.

The Mayor of London is banning household visits as a way of slowing the spread of coronavirus. (https://bit.ly/30aS9p6)

State police say a naked man in Schuylkill County, Pennsylvania crashed a stolen vehicle into a fire station. 18-year-old Damian Hester is charged with criminal trespass, vehicle theft, reckless endangerment, indecent exposure, criminal mischief, stop sign violations, and accident involving damage to unattended vehicle. A woman told police Hester stole her car from in front of her home. The woman said she and her boyfriend ran outside after hearing Hester crash her car into a parked vehicle. The woman said she and her boyfriend tried to remove Hester but he drove away, almost hitting her boyfriend. State police say Hester drove over the Heights Fire Company parking lot and crashed into the building, coming to rest inside it. The trooper saw the man, who was naked, crawl from the driver's seat into the vehicle's backseat. He was arraigned and sent to Schuylkill County Prison after failing to post $50,000 straight bail. (https://bit.ly/339R0Ah)

Deputies with the Charlotte County Sheriff’s Office arrested a man following a domestic violence incident. The incident happened September 23rd at an apartment building in Port Charlotte. The victim told officers that her boyfriend, Sean Metcalf, had slapped her with a piece of pizza after she had attempted to throw a pizza box away. The victim told officers that Metcalf had angrily told her to not throw his dinner away. She threw the box down on the ground and told police he picked up on of the things away and became very angry. She told police Sean picked up a slice of pizza and hit her with it. The responding deputies noticed grease and sauce on her face and hair and immediately took Metcalf into custody. He admitted to losing his cool but he told officers he had no idea how pizza got all over the victim. Metcalf has been charged with Domestic Battery. (https://bit.ly/3kVMX0p)

A Bradenton man was arrested for assault after hitting a mechanic with a golf club because he was fixing his car too slowly ….. FLORIDA (https://bit.ly/35crbOT)

A Boy Sent Baby Yoda To Help Firefighters. Now They're Taking Him On Calls
https://www.sunnyskyz.com/good-news/3976/A-Boy-Sent-Baby-Yoda-To-Help-Firefighters-Now-They-039-re-Taking-Him-On-Calls