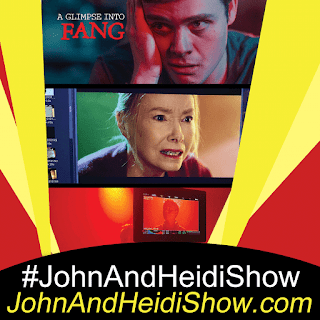 A survey by the Department of Education found that just 23% of eighth graders in Washington, D.C. know how to read. (https://bit.ly/2Ryj6OW)

An alleged meth trafficker was busted by Florida cops — all thanks to his lost wallet. Sean Michael Edwards, of Winter Haven, got on the radar of the Polk County Sheriff’s Office on September 18th when a good Samaritan turned in the 36-year-old’s missing billfold, complete with his ID and $565 inside. The deputies “did some digging” and learned that Edwards had a felony meth trafficking warrant out for his arrest. That’s when they hatched a plan to bust the alleged drug dealer by getting him to come pick up his cash three days later. Cops found $3,132 in cash and a plastic bag with more than two ounces of a white crystalline substance that later tested positive for meth during a search of Edwards and his white motorcycle. He was charged with multiple felony drug counts — including trafficking methamphetamine. (https://bit.ly/3jfClJg)

The View co-host Meghan McCain has given birth to a baby girl with her husband Ben Domenech. The baby’s name is Liberty Sage McCain Domenech. (https://pge.sx/348Smur)

Showbiz Insiders say Marie Osmond was fired from “The Talk” after Sheryl Underwood and Sharon Osborne threatened to leave the show if she wasn’t let go. (https://pge.sx/36fmlU4)

Mariah Carey’s memoir, “The Meaning Of Mariah Carey,” hits shelves this week along with a new album called “Rarities.” Mariah talks about all of the tragedies she’s witnessed in her life. (https://bit.ly/2EIvUzq)

Nicaragua has proposed a law that would make fake news punishable by a year in prison. (https://bit.ly/3n1vyoX)

Mike Tyson will be voting for the first time ever in this election thanks to a Nevada law that restores voting rights for felons. (https://bit.ly/3jcAvJk)

Gunshots erupted outside Taylor Swift’s $18 million dollar New York City home on Sunday after two men tried to rob a sneaker store. This is the second shooting incident on Taylor’s New York City street in the past week. (https://bit.ly/33agrBF)

A study found that the filthiest place on an airplane isn’t the bathroom but your fold down tray table. The average computer keyboard is five times as filthy as a toilet seat. Flip-flops play host to more than 18,000 bacteria. And now we’ve learned that billions of microbes are lurking in your shower. Researchers (University of Colorado-Boulder) looked at 45 showerheads from across the U.S. and found that each showerhead was home to an average of several billion microbes per square centimeter. About half of the particles that come out of a showerhead are sufficiently small to penetrate the deep airways, meaning that each supposedly cleansing breath we take while showering could be full of foreign microbes. If you’re otherwise healthy, chances are that a grody showerhead won’t be your downfall. In fact, very few people have probably ever died of — or gotten sick from — showerhead microbes. As the report notes, we move through a “sea of microbial life” in our daily lives, so most of us don’t need to give up showering just yet.

Microsoft is still working to determine what caused an outage to Microsoft Office and Microsoft Outlook on Monday night. (https://cnn.it/3cJuW2l)

Amazon is introducing palm-scanning technology as a form of entry into its store. (https://bit.ly/33e5P4U)

An Austin, Texas man has built a candy shooting cannon and a candy dispensing robot to keep Halloween alive in his neighborhood. (https://bit.ly/33fpcKA)

According to statistics each year in the U.S. police officers arrest around 5,400 kids under the age of 10.

China has begun giving unproven Coronavirus vaccines to its residents.

We’ve heard of calling in sick, but faking your own kidnapping? Really? That’s what one kid in Ohio did so she wouldn’t have to go to school. The Pickaway Country teenager called police to report that someone had tried to abduct her while she was waiting for a school bus. She even gave the cops a description of the suspect. Then, in an interview with the police and her mother, the girl recanted; prosecutors are considering charges. Sheriff Robert Radcliff told the affiliate that his office was worried what other parents might do to defend their kids. “People were going to the bus stop with guns trying to protect their children,” Radcliff told the affiliate. “They were looking for a black vehicle — someone that matched that description — and you know unfortunately the wrong person could’ve come along and been injured over something like this.” (https://bit.ly/3icT3Yx)

A Floridian burglary suspect hit a cop in the face with a Bible, an attack that led to his tasing and arrest on multiple criminal charges. 39-year-old Robert Otis Hoskins, the alleged Bible thumper, was collared Tuesday afternoon following a confrontation at a residence. Charged with burglary, larceny, resisting, and battery on a law enforcement officer, Hoskins is being held in the Marion County jail in lieu of $13,000 bond. Police responding to a 911 call about a burglary encountered Hoskins--who was only wearing a pair of gray briefs--outside his residence, next door to the burglarized property. As a deputy sought to question Hoskins, he began shouting at the cop as he approached with a book in his right hand. Hoskins then wound up and threw the Good Book at the officer, who was struck in the face and jaw by the volume. (https://bit.ly/343C5GY)

A West Palm Beach woman was busted for grand larceny after stealing a pony at a child’s birthday party ….. FAKE NEWS

Mailman Hailed As Hero For Saving Woman On Route
https://www.sunnyskyz.com/good-news/3977/Mailman-Hailed-As-Hero-For-Saving-Woman-On-Route