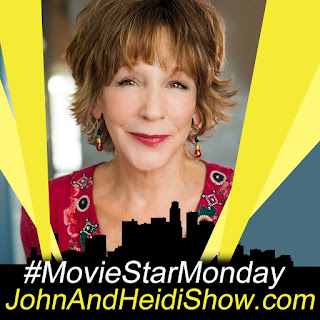 It's a #MovieStarMonday as we visit with BETSY RANDLE, the mother from BOY MEETS WORLD, now co-starring in new thriller PAINTER available now on VOD. https://amzn.to/31aYilJ

A study by NASA found that there are twenty-four planets that are better for life than planet earth. (https://bit.ly/33xJzTE)

A new study found that 1/3rd of COVID-19 patients have an altered mental state. (https://bit.ly/2GDLdtU)

A 21-year-old attending the University of Hull in England recently had to be rescued by authorities after she got stuck inside a dryer following a night of drinking wine and tequila, her college’s newspaper, Hull Live, reported. “I was with my other housemates, and one of them dared me to get in it,” Rosie Cole told the newspaper. “Me thinking there was no chance I’d actually fit, decided to try it and to my surprise it seemed easier than I thought.” The problem, apparently, was that it wasn’t as easy to get out. After her roommates were unable to free Cole from the appliance, they called emergency officials to the home, where six people live, at around 11:00 p.m. Three firefighters ultimately managed to free the college student from the dryer, according to Hull Live. One of Cole’s roommates filmed her being rescued. (https://bit.ly/2HT7ep5)

Simon Cowell is walking 10,000 steps a day as he recovers from a bike crash.(https://pge.sx/3jRuuSq)

Kylie Jenner says she regrets getting into a brawl with sister Kendall during last week’s episode of “Keeping Up With The Kardashians.” (https://pge.sx/34HREEC)

Drew Barrymore says she was not offended after SNL mocked her new chat show. (https://pge.sx/3iwlEIs)

Showering during the workday helps employees become more productive and more creative, according to a new study. Four businesses — a restaurant, an architectural firm, an advertising agency, and a lingerie company — took part in the eight-week study. Employees took a shower break and results showed improvement across a range of areas, from mood to productivity.

Why do dogs leap at the opportunity to stick their heads out of car windows while riding? Discover magazine runs through several possible motives. The first is that dogs’ sense of smell is so strong that sniffing all of that passing air is a exhilarating sensation to them... or, dogs may simply enjoy the passing sights, the air blowing on their faces, and the opportunity to contemplate escape.

According to crime experts, when burglars break into a home they most often begin searching the master bedroom. What they check, in order:

3. Shoe boxes in the closet

Police in Italy have pinned a meaty crime on a supermarket employee. They say the man walked out of work with $1,200 worth of meat stuffed in his pants.

A Chinese man hospitalized with back and chest pains was found to have had an acupuncture needle lodged in his body for 40 years. Doctors initially told the 60-year-old it was “just old age” when he started developing back and chest pains, but then decided to perform an X-ray when his pain became severe. That’s when they found the needle in his stomach from acupuncture treatments he had 40 years before. Now that the one inch needle has been removed the man’s pains are gone.

The average fee these days for using an ATM other than your bank’s ATM is $2.97.

Doctors in Israel and India have teamed up to develop a thirty second Coronavirus test that should be ready within days. It works like a breathalyzer in that you blow into a tube and it gives you a result. (https://bit.ly/2SKOSZJ)

A passerby who thought they spotted a Halloween decoration in the parking lot of a Maryland bar actually discovered a dead body. The unidentified person called 9-1-1 after seeing what they believed to be the Halloween decoration in the parking lot of a closed bar called the Rustic Inn in White Marsh, outside of Baltimore. Police responded and discovered the dead body, which had “trauma.” “Right now, the only information that we have is that the body has suffered some sort of trauma,” Jennifer Peach, of the Baltimore County Police Department, told the local CBS station. “We don’t what that trauma is just yet.” The identity of the victim was not immediately released. (https://bit.ly/3jHvmJz)

A man is facing charges because he was using counterfeit money at a casino in Tucson, Arizona and then got into a fight with a federal officer. Court documents say 50-year-old Richard Guy Wasson, Jr. was using the funny money at Casino of the Sun, so Pascua Yaqui police were called. When the officer asked Wasson for his identification, he refused. The officer then tried to detain Wasson, but investigators said a fight broke out and he hit the officer. Wasson then pulled a pistol from his waistband. That's when the officer fired his own gun twice but missed Wasson. He was later taken into custody.(https://bit.ly/3jHIDBD)